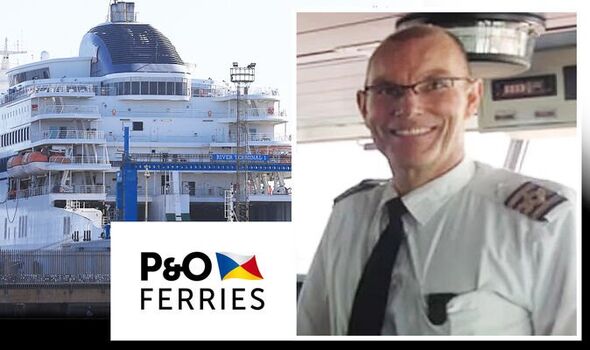 Unions branded the move “a betrayal” and “one of the most shameful acts in the history of British ­industrial relations”. Security men with handcuffs tried to board ships and remove staff who stayed on after being told it was their “final day of employment”.

Defiant captain Eugene Favier locked down his ship to stop security teams escorting his loyal workers off and letting the new crews on. And in a ­further insult, horrified workers reeling from the news were forced to watch coaches of replacement staff in P&O overalls lining up to board – and take their jobs.

The move has now left workers anxiously panicking about how they will pay their bills. It has also thrown the UK’s vital freight routes into chaos and disrupted customers’ planned trips – with P&O ships now unlikely to sail for up to 10 days.

Amid the anger, P&O staff launched furious protests and reacted with defiance.

Dutchman Mr Favier, captain of the Pride of Hull, sealed himself and his 141-strong crew inside the huge vessel after the firm was accused of “illegally” hiring “heavies with handcuffs” to kick their old staff off the boats – and let the new crews on.

He vowed to remain on the ferry until the dispute was resolved, said he had enough food and supplies to last “as long as it takes”.

Shocking video footage also showed the moment dozens of security staff boarded a ferry at Larne port in Northern Ireland to forcibly remove staff who had been staging a “sit in protest” onboard.

Workers slammed the ferry firm for “scheming behind closed doors before stabbing us all in the back”.

Last night, employment lawyers warned that all 800 dismissals may well be illegal.

And union bosses slammed the firm and said it was “a scandal” that British workers had been betrayed when UK taxpayers were made to foot the bill for the company’s costs during the pandemic.

Mick Lynch, general secretary of the National Union of Rail, Maritime and Transport Workers, called the move: “One of the most shameful acts in the history of British industrial relations.”

Downing Street said they had no prior warning of the move from the Dubai-owned parent firm DP World.

P&O staff were informed about their sacking via video call (Image: BBC)

Last night, in an urgent statement to the House of Commons, transport minister Robert Courts said passengers should expect disruption to ferry routes for as long as 10 days.

But blasting the firm, he told MPs the decision to fire 800 staff with no notice was “wholly unacceptable”.

He added: “These are hardworking, dedicated staff who have given years in service to P&O. The way they have been treated is wholly unacceptable.”

“Reports of workers being given zero notice and escorted off their ships with immediate effect while being told cheaper alternatives would take up their roles shows the insensitive way in which P&O have approached this.”

“I’m extremely concerned and angry at the way workers have been treated by P&O.”

“This is not a corporate restructure. It is beneath contempt. The action of thugs.”

“P&O last year paid out £270million to shareholders while taking furlough money from taxpayers.” Stephen Nee, head of employer relations at P&O, sparked the crisis at 11am by telling the 800 stunned staff they were all being made redundant with immediate effect via an online call.

But proving the announcement was carefully planned, the firm recruited “heavies” from a private security firm in case of a backlash among staff.

An email sent to guards from the security firm read: “The client we are assisting requires 16 officers [handcuff-trained] to support security teams in the unlikely event some staff become challenging.

“Essentially, our client will be informing staff of redundancies and there is a possible risk of backlash. You will all need your uniform including cuffs and utility belt.”

Unions advised staff to stay put and some crews and captains sealed their ships off from gangs of security staff attempting to escort all axed employees on to dry land.

Fired P&O workers in Dover clashed with motorists after blocking a road close to the port, while holding banners and flags saying: “Stop the P&O jobs carve up”.

One protester, who had worked for the company for decades, said: “All this service for nothing. The police will have to take me away.”

In Hull, after the stand-off on the Pride of Hull ship, the crew finally agreed to leave. But local RMT organiser Gaz Jackson said they were all “absolutely devastated” by P&O’s “unacceptable” and ­“unforgivable” actions.

He added: “I’ve seen grown men crying because they don’t know where they’re going to go from today.”

Labour MP Karl Turner added to the ­controversy when he posted a photograph of a coach which he claimed contained a “new foreign crew waiting to board the Pride
of Hull”.

The Daily Express understands axed crews in Dover looked to the harbour to see new cheaper crews in P&O overalls waiting to board their ship.

One mother, who asked not to be named, said the loss of her husband’s job after 30 years with the firm, and her son’s apprenticeship, has left them reeling.

She said: “Then pictures emerged of three coach loads of foreign workers waiting at ports to take their jobs. They were already wearing P&O uniforms – and the staff still hadn’t been told they were being let go.

“They were told they had five minutes to get their stuff and get off the ships. These guys are week on, week off workers who have called these ships home for half of the year every year.”

Staff were also pictured on board the P&O ferry Pride of Canterbury at the moment they were informed they had been sacked. Irritated customers also criticised the ferry firm. David Reger, 67, had expected to sail to Rotterdam and then on to his home in Germany after days ­working in the UK.

He said: “I’m fed up. We’ve not been told anything but it doesn’t look like it’s going to sail today.”

P&O Ferries carried more than 10 million passengers a year before the pandemic and about 15 per cent of all freight cargo in and out of the UK.

The historic operator was founded in 1837, and expanded to become the UK’s best-known ferry firm with a fleet of 55 ships to its name.

However, demand slumped during the pandemic, forcing it to announce 1,110 job cuts.

P&O said the company was currently not a “viable business” and that another 800 seafarers had been handed immediate severance notices with compensation packages for the “lack of advance notice”.

The firm said: “In its ­current state, P&O Ferries is not a viable business. We have made a £100million loss year on year, which has been covered by our parent DP World. This is not sustainable. These circumstances have resulted in a very difficult but necessary decision, which was only taken after seriously considering all the available options.”

But legal expert Tom Long, a partner at Shakespeare Martineau, warned: “P&O’s decision to fire 800 staff with immediate effect appears to contravene the requirements needed for a normal mass redundancy.

“Where an employer plans to make 20 or more redundancies, there is a requirement for a period of consultation with employee representatives, such as a trade union. That period is 45 days, where 100 or more ­redundancies are planned in any one location.”

And while the ferry firm sacked 800 staff by video link blaming growing losses, a starkly different tone was taken by Dubai-based owner DP World in its just published annual report.

It boasted of its strong 2021 financial results, which saw pre-tax profits rising 24.2 per cent to £1billion, and revenues climbing 26.3 per cent to £8.2billion.

It rewarded executives by increasing their bonuses and benefits by 16.9 per cent to £13.1million.

Chairman and chief executive Sultan Ahmed bin Sulayem said: “A strong 2021 leaves us well-placed to focus on delivering our 2022 targets, and by working together, we will forge a path to a sustainable future.”

Not mentioned in DP World’s annual report was its deal with Russia’s state nuclear energy group Rosatom which was formed by Putin in 2007.

Rosatom is now apparently taking ownership of Ukraine’s nuclear facilities such as Chernobyl and Zaporizhzhia in Russian-held areas.

DP World and Rosatom plan to build an arctic trade route to cut shipping times between Europe and Asia.

What to do if you are a passenger

ANXIOUS P&O customers face a nightmare if they still want to travel.

But the company has promised to try to help some passengers.

Its website advises those travelling from Dover to Calais to “arrive at the port as booked” and go to “the DFDS check-in booths”. It adds: “For all other routes please check twitter for latest advice.”

The firm’s terms and conditions state P&O will refund fares if it “cannot ship you at all” or arrange “a suitable alternative ferry crossing”.

I suspect P&O knew that its sackings would cause uproar, given the enhanced severance packages.

Travel has been hit hard by Covid and P&O says it had to move quickly or its survival would be under threat.

However, it needs to recognise that the virus has made work even more stressful for its staff, as has the cost-of-living crisis.

There is a right way and wrong way and P&O picked the worst possible.

Consultation should have occurred and the Government warned. This did not appear to happen.

And having already suspended services, passengers’ mood was not helped by the sackings.

Surely with the financial muscle of owner DP World, they could have executed a turnaround without the need for so much carnage?

The bloc has offered companies a way to...

The mass shooting in Buffalo has drawn attention...

Meghan and Harry stepped back from their roles...

The bloc has offered companies a way to...

The mass shooting in Buffalo has drawn attention...

Meghan and Harry stepped back from their roles...