One of the Chicago area’s top prosecutors wants to expunge the records of thousands of people for drug-related offences in a controversial ‘test balloon’ for the country’s drug laws.

Kim Foxx, attorney general for Cook County in Illinois, said she wants to automatically wipe clean the records of people found selling cannabis in larger amounts, as well as potentially the arrest records for harder drugs like heroin and cocaine, in a bold new ‘vision’ that was revealed today.

The 48-year-old, who is the first black woman in her post, called the move a ‘larger, progressive’ approach to treating drug addiction and said that in some areas of Chicago, drug dealing ‘was the only economy that they had.’

Foxx’s office has already automatically deleted 2,200 low-level cannabis convictions for possession of 30 grams or less; the amount that’s now legal to carry since the drug was legalized in the state in January 2020.

Foxx revealed in an interview with The Chicago Sun-Times that she wants to expand that to those convicted of carrying larger amounts of cannabis than 30grams.

Currently those convicted of possessing between 30-500grams of cannabis have to petition a court to have their record expunged.

‘If we recognize substance abuse disorder as a health condition, then we must modify our justice system to treat it as such,’ Foxx said.

‘Criminalizing health is not in the interest of public safety.’ 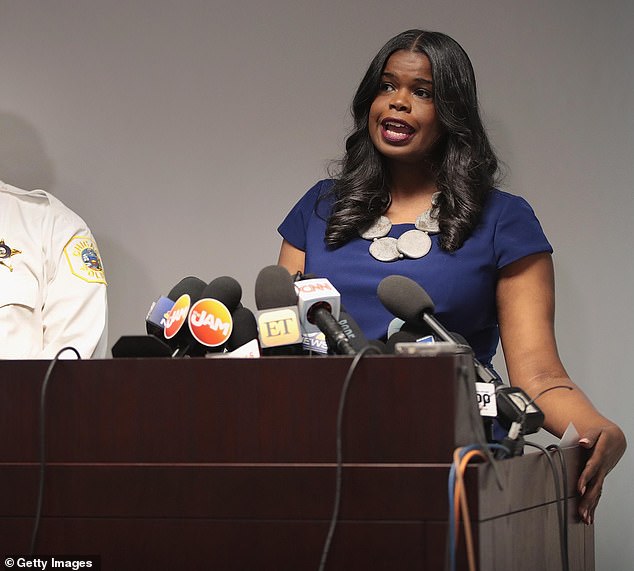 Cook County State’s Attorney Kim Foxx, pictured here in 2019, has announced a bold new ‘vision’ for the city’s drug laws, including expunging convictions for possession of larger amounts of cannabis 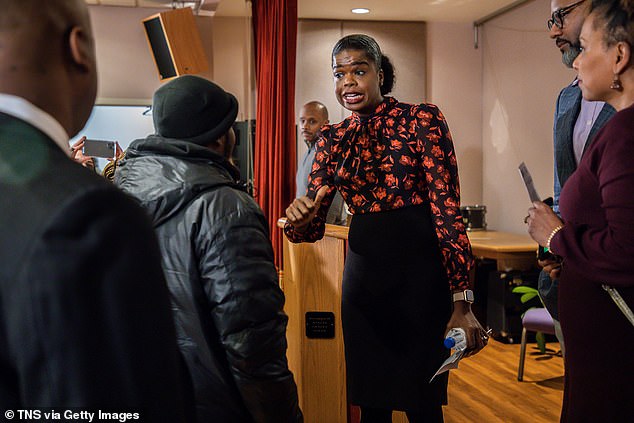 Foxx, pictured at Trinity United Church of Christ in Chicago on December 31, 2019, has caused controversy in the past with her rival Pat O’Brien calling her a ‘cheerleader for criminals’ 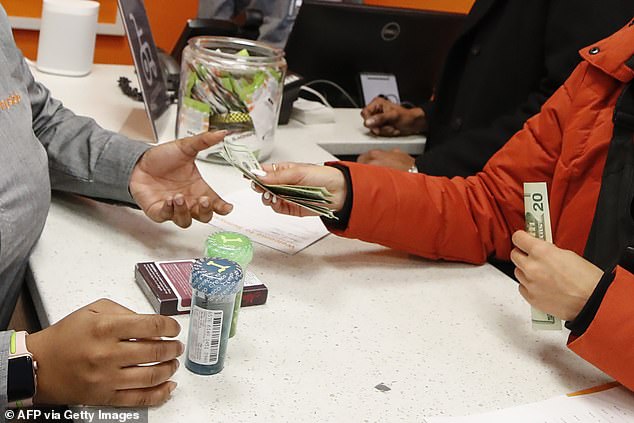 On of the first day of January 2020 recreational marijuana became legal in Illinois. Pictured is customer Elise Swopes making a purchase at Sunnyside Cannabis Dispensary on January 1, 2020. The Cook County attorney general has already expunged 2,200 records for those convicted of possessing under 30grams of cannabis, the amount it is now legal to buy

Sarah Sinovic, a spokeswoman for the state’s attorney, said that Foxx doesn’t yet have any immediate plans to begin automatically expunging those records.

‘It’s a vision that she has,’ Sinovic said.

Foxx said that her ‘vision’ doesn’t end with marijuana.

‘What has been a long concern of mine…is other drugs that are still illegal, that are still being prosecuted, in some of these very neighborhoods that are being devastated by the war on drugs,’ Foxx said.

‘And marijuana was but one of the drugs. It wasn’t the totality of the devastation.’

Currently, possession of 15 grams or less of heroin or cocaine can result in a felony conviction that typically can’t be expunged from criminal records.

Asked whether she would advocate for expunging convictions for possession of harder drugs, Foxx answered ‘yes — as long as it’s part of a larger, progressive approach to handling addiction,’ The Sun-Times reported. 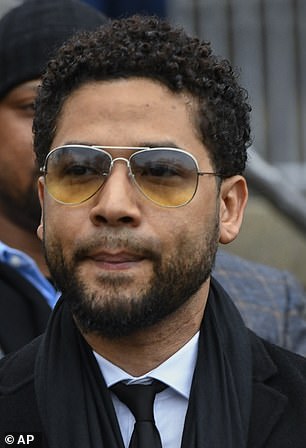 Foxx caused outrage last year over her handling of the Jussie Smollett case, with special prosecutor Dan Webb accusing Foxx and her staff of misleading the public before and after tossing charges that accused the former Empire actor of staging a racist, anti-gay attack against himself in January 2019.

Webb restored the charges against Smollett earlier this year, but no trial date has been set as the pandemic has stalled Illinois court proceedings.

Foxx was re-elected for a second-term in November after her rival Pat O’Brien branded her a ‘cheerleader for criminals’.

The comments appear to be the first time Foxx has spoken about automatically expunging records of those found guilty of more serious drug offenses than low-level possession.

Previously she said she thought those convictions should be reviewed on a ‘case-by-case basis.’

Foxx’s office is still working on expunging more lower level cannabis convictions, a process that was halted by the arrival of COVID-19.

The first batch of records, which include convictions from 2013 through this year, must be completed by Jan 1, 2021.

The next set of 11,000 expected cases stretches from 2000 to 2012 and has to be completed by the start of 2023, while earlier convictions must be expunged over the following two years.

Foxx said she had hoped to move through the low-level cases ‘more expeditiously’ so her office could begin tackling the more serious offenses.

Foxx’s push is in line with national trends, with recreational cannabis currently legalized in 15 states for adults aged over 21, since Colorado became the first in 2012.

Medical marijuana is legalized in 20 states. 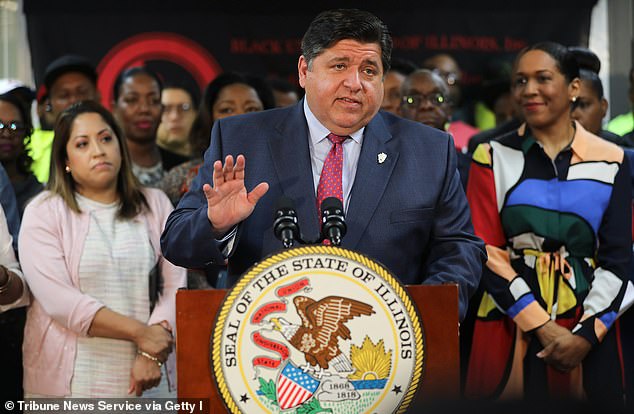 On January 1 2020 recreational marijuana became legal in Illinois. Pictured is Illinois Gov. J.B. Pritzker, alongside other lawmakers and stakeholders, at Black United Fund of Illinois, on Saturday May 4, 2019, announcing the bill 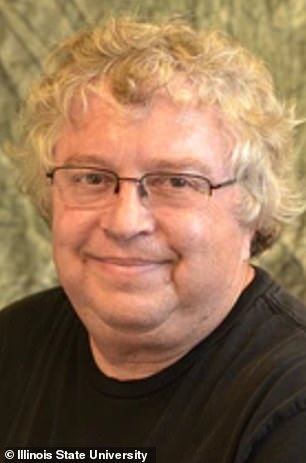 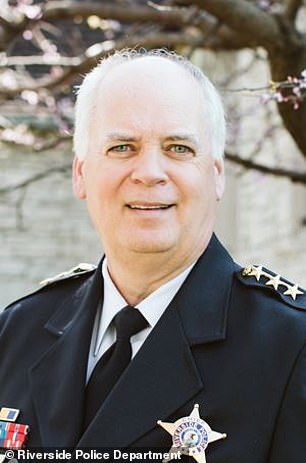 Recreational weed legal for adults over 21:

Medical weed is legal for adults over 21 with a prescription:

Ralph Weisheit, a professor of criminal justice at Illinois State University, said: ‘It is clear that public support for harsh drug sentences is fading, and this is particularly true for minor possession and use cases’.

He added that it had happened faster than he anticipated and said: ‘Decriminalizing minor possession of hard drugs, as has happened in Oregon, is something I would not have predicted even five years ago.’

Professor Weisheit added that he was surprised to see a prosecutor leading the charge.

‘That prosecutors would express any support for these changes is not something I would have expected. Historically, prosecutors have not led the charge for decriminalization,’ he said.

Riverside Police Chief Thomas Wietzel, former president of the Illinois Association of Chiefs of Police and a member of the state’s Impaired Driving Task Force, has spoken out against legalizing both medical and recreational marijuana in the past.

But the top cop now supports the expungement of lower-level cannabis offenses, as long as they are ‘not selling to juveniles, at public parks… I would not be ok with that’, he said.

He does not support Foxx’s suggestion that convictions for cocaine and heroin possession or selling should be expunged and said ‘that’s a different story’.

The legalization of marijuana in Illinois was the 11th state to do so at the time. It revealed deep divides among racial and class lines, with the first licenses in Chicago issued to mainly white business owners.

It had been hoped that the law would lead to a boost to the economy.

He added: ‘We’re going to see an increase in job growth, we’re going to see wealth accumulation. While the work of the commission will be very far-reaching, we’re going to be committed … to developing strategies to spur investment and reinvestment in the disproportionately impacted areas of the county. That is true social equity,’ The Chicago Tribune reported.

Has Nick Pope proven himself as England's BEST goalkeeper with Euros fast approaching?

Biden has 59% approval rating after 100 days, despite increasing concerns about illegal immigration