EU ‘made themselves dependent’ on Russian gas says Portillo

Analysts have warned Europe would only be able to cope for six weeks without Russian gas supplies. Dependence on Russian gas and oil has increased in recent years due to depleting North Sea reserves, cutting of coal power to achieve carbon neutrality by 2050, decommissioning of nuclear power plants, alongside insufficient investment in renewable sources.

Although the UK only imports four percent of its gas supply from Russia, other countries in Europe are heavily reliant on it which makes issuing sanctions towards it difficult.

Following an EU summit in Versailles on Friday EU leaders said in a statement they agreed to “phase out our dependency on Russian gas, oil and coal imports as soon as possible.”

He said: “As long as the West is economically dependent on Putin, he will do all he can to exploit that dependence. And that is why that dependence must – and will – now end.” 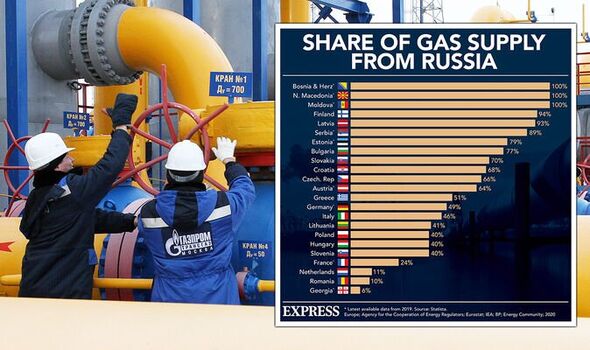 Europe is on the brink of an energy crisis (Image: Getty)

Which EU countries are most reliant on Russian gas?

Germany’s economy would be most affected if Russia were to stop gas supply as the country imports almost half of its gas supply – 49 percent – from Russian sources, according to data from the European Union Agency for the Cooperation of Energy Regulators.

To decrease its dependence Germany is working to diversify its energy supplies to be in a position to give up Russian coal by the summer and oil by the end of the year.

Germany’s economic and energy minister Robert Habeck said an immediate boycott of Russian gas and oil could hurt its own population, predicting mass unemployment and poverty.

He said in a press conference on Sunday: “With coal, oil and even gas we are step by step in the process of making ourselves independent.

Europe would only be able to cope for six weeks without Russian gas (Image: EXPRESS.CO.UK)

Among the financial sanctions issued against Russia, German chancellor Olaf Scholz decided to u-turn on the Nord Stream 2 gas pipeline which, once operational, would have doubled gas supply from Russia to northern Germany.

Mr Scholz said last week: “Currently there is no other way to secure Europe’s supply with energy to generate heat, for mobility, for power supply and for industry.”

Italy also has a high dependence on Russian gas, making up 46 percent of supply.

The Italian government plans to phase out imports of Russian gas “within 30 months” according to the Italian minister for the ecological transition, Roberto Cingolani, last week.

He added that national consumption “has remained constant” and domestic production is “more manageable and can be cheaper”.

Poland receives 40 percent of its gas from Russia and claims to be an example of how to end supply with the country’s contract with Russia’s Gazprom expiring at the end of the year.

Poland’s Prime Minister Mateusz Morawiecki said last week: “Over the past five years, we have built the Baltic gas pipeline to Norway and in six months, for the first time in decades, we will be independent of Russian gas.”

However, the country is still reliant on Russia for its coal and oil supplies.

Russian gas also makes up more than 90 percent of the gas supply in Latvia and Finland, while Serbia receives 89 percent.

The Latvian ambassador to Canada, Kaspars Ozoliņš has said Latvia would welcome shipments of Canadian liquified natural gas (LNG) to reduce its dependence on Russian gas.

He said: “We are trying to build a resilient energy system. If Canada is going to invest in LNG, we would wholeheartedly support it.”

Although Finland relies on Russian gas, consumption is used by industry not households like other nations.

Olli Sipilä, CEO of Gasgrid Finland, which manages Finland’s gas pipelines said there is enough supply even if Russian gas deliveries are stopped.

He said that the Balticconnector which connects Finland to the Baltic gas network would be able to satisfy demand.

What about the rest of Europe?

These three countries are among the poorest on the continent and Russian gas has replaced a previous reliance on coal.

North Macedonia plans to construct a gas interconnector to Greece to enhance its energy security and diversify its gas sources.

But, none are members of the European Union and only North Macedonia is a NATO member – both the EU and NATO have been coordinating the response to Russia’s invasion of Ukraine.

Which European countries have low dependence on Russian gas?

Countries including the Netherlands and Romania have low dependence on Russian gas with supply, making up 11 and 10 percent respectively.

In a joint press conference with French President Emmanuel Macron in Paris last week, Dutch Prime Minister Mark Rutte said he was against cutting off Russian supplies in the interests of sustainability in EU nations.

He said: “We have to discuss our vulnerabilities in terms of our dependency on Russian oil and Russian gas. I would not plead for cutting off our supply of oil and gas from Russia today, it’s not possible because we need the supply and that is the uncomfortable truth.”

However, the Dutch government is preparing to expand its renewable energy as part of the reduction of the Netherlands’ dependence on Russian gas.

Minister for Climate and Energy Policy Rob Jetten said: “The war in Ukraine, high energy prices and concerns about gas supplies make it clear once again that the Netherlands and Europe are too dependent on the import of fossil fuels.

“Therefore, we are preparing to ensure that sufficient gas is available next winter and we are taking measures to reduce the dependence on Russian gas.

“That is a complex task that brings with it dilemmas, in which we need to find the right balance between the reliability, affordability, sustainability and security of our energy supply.”

The UK is not dependent on Russian natural gas – the bulk of British gas demands are met by North Sea reserves and imports from Norway as well as imports of LNG from the Middle East.

Last week, as part of international economic sanctions against Russia, the UK Government announced it would end dependence on Russian oil throughout the year.

UK business secretary Kwasi Kwarteng said on Twitter: “While the UK is not dependent on Russian natural gas – four percent of our supply – I am exploring options to end this altogether.”

Mr Johnson said yesterday he would set out a British Energy Security Strategy to determine how the UK can become more self-sufficient.

He said that a quarter of the UK’s power was already coming from renewable sources – which is better for both the environment and energy bills.

He added: “Renewables are the quickest and cheapest route to greater energy independence. They are invulnerable to Putin’s manipulations.”

The Senate Thursday approved more than $40 billion of...

The Dutchman will be in attendance for the...

The decision means that Prince Andrew, who stepped...

Meghan Markle and Prince Harry and their children...
AMED POST

The Senate Thursday approved more than $40 billion of...

The Dutchman will be in attendance for the...

The decision means that Prince Andrew, who stepped...