French Fishermen accuse UK of ‘not respecting’ Brexit agreement: 'This can't go on!'

Under the post-Brexit trade deal, which came into force at the beginning of last year, boats from EU member states need licences to fish in UK and Jersey waters, while UK boats need licences to fish in the waters of EU member states. Licences are granted to boats that can prove they have fished in a particular area in the three years preceding the UK’s Brexit transition period. However, while it’s easy for big trawlers to prove where they have previously fished and be granted a licence, smaller vessels find it more difficult to provide proof.

In turn a row escalated between the UK and France after dozens of French boats were denied licences to fish in UK waters last October.

The dispute, which centred around licences for small boats, led to Paris making various threats about what would happen if more licences were not issued.

French President Emmanual Macron announced last November: “We have not got what we wanted. We will not yield.”

Read More: Expert reveals two scenarios on how the war in Ukraine will end 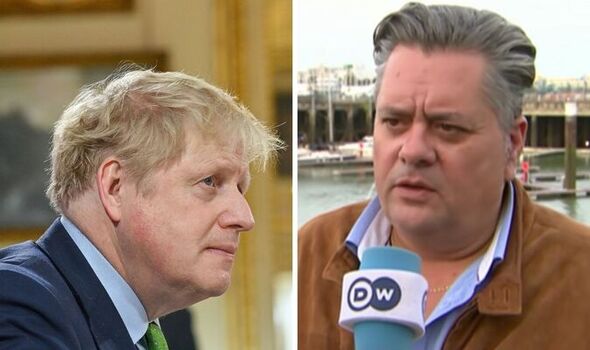 French fishermen said the UK was not honouring its side of the bargain when granting access to its waters.

“Since January, the small boats haven’t been allowed to enter Britain’s 12-mile zone.

“We accuse them of not respecting the agreement they signed, which says access to the waters should be preserved. And now they’ve added several criteria to block people.”

Tensions have risen between France and the UK (Image: Getty)

In December, the UK Government said it had received 50 applications for French boats under 12 metres to fish in UK waters, and issued 19 licences.

The same month, Guernsey also announced that it had issued licences to 40 boats, and had rejected another 15 applications.

At the time, Jersey ministers gave permanent licences to five French vessels, taking the total number of licenced boats to 130.

Overall, that meant there were still 33 vessels with temporary licences which expired in January this year, while 54 applications had been rejected.

Fishermen’s catch has been seriously affected by the tension (Image: Getty)

French Fisherman Christophe Lhomel, who drives the Jeremy-Florent, told DW News: “All that’s left is this small bit where we can work. It’s nothing.

“The whole zone where we worked before, we no longer have access to and the British, they’ll pursue us if we enter their waters.

The fisherman revealed that his catch had been seriously affected by the restrictions.

Small vessels have struggled to provide proof to get licences (Image: Getty)

Mr Lhomel continued: “The whole catch ‒ there are about 20kg of Dover sole back there, and all these are dogfish.

“So it’s nothing, and a few crabs. All this stuff in the nets is worth nothing.”

Another fisherman, Jeremy Lhomel, claimed he was considering leaving the industry due to the lack of work.

He said: “I only work six months of the year. This can’t go on, It’s over.

“Now the season for the whelks is beginning and they live in British waters. We can’t go there.

“But hope keeps us alive. We’re waiting another week for news from our government. We’ll see.”

France took their complaints to the special tribunal set up as part of the Brexit agreements in January.