The country’s economy has already been battered by crippling sanctions. But some EU countries are now calling for measures that will go even further, with Poland demanding a complete blockade to Russia’s ability to trade for instance. But despite publishing an energy strategy detailing how the bloc will scupper energy ties with Putin, the EU has still yet to follow the UK and the US in sanctioning Russian oil.

The bloc may have been slower to target Russia’s energy sector given its huge dependence on Russian for its exports, supplying 40 percent of the EU’s gas.

Politico reports that some diplomats have hinted at the possibility that oil will be sanctioned but gas left off the table as this would be less damaging for the EU’s economy.

But Germany, one of the most reliant of the bunch as Russia supplies around 40 percent of its gas imports, is reportedly pushing back against the calls for energy sanctions.

This is likely much to the dismay of several states pressing for stronger action. 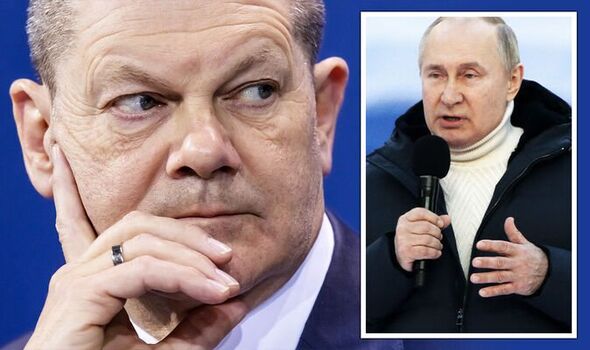 Germany has been slammed for ruining the EU’s chance to sanction Russian energy (Image: Getty )

The EU has published a plan to scupper energy ties with Putin (Image: Getty )

Polish Prime Minister Mateusz Morawiecki said: “Fully cutting off Russia’s trade would further force Russia to consider whether it would be better to stop this cruel war.”

France has argued that there should be no “taboos” in terms of sanctions if the situation in Ukraine gets worse.

But that sentiment does not appear to have been echoed by Germany, whose economy could go into turmoil if Russia’s energy imports were cut off.

German Vice-Chancellor Robert Habeck said on public radio DLF on March 19 that completely slashing Russian energy imports could mean a “three percent to five percent loss of GDP”, which would lead to “some people no longer earning any money at all”.

He added: “And these some people are very, very many”.

“If certain sectors, such as the chemical industry or steelworks, can no longer produce, entire supply chains will break down.

“Not only are these sectors affected, but the entire production process breaks down in many places.”

But that position has come under fire.

Veronika Grimm, one of five members of the German Council of Economic Experts, said: “We will have to accept a loss of prosperity in the medium term anyway if we want to become independent of Russia.”

Several Germans have argued that this level of emergency was dealt with during the Covid pandemic.

Mr Habeck said a said cutting off Russia could mean a “3 percent to 5 percent loss of GDP” (Image: Getty )

“In the end, who suffers economically from an energy boycott is a political question.

“Why does a centre-left government, of all things, not see that?”

German Greens’ co-founder Ralf Fuecks, also compared this scenario to the “worst-case” effort needed to “cushion the economic and social impact of the corona crisis”.

He asked: “Too high a price to pay to stop a humanitarian catastrophe in Ukraine and to stop Putin?”

He said: “We turned to you.

“We told you that Nord Stream (gas pipelines) was a kind of preparation for the war.

Nord Stream 2 was a planned £8billion pipeline that Mr Scholz pledged not to certify after months of international pressure.

Ukraine had constantly claimed Putin was using gas as a geopolitical weapon and strongly opposed the new project.

Police were called to a road in St...
AMED POST