Rocketing energy prices and high inflation in major economies are pushing the world towards an economic slowdown, fuelling fears of a possible global recession. Investment giant Morgan Stanley identified central bank tightening, supply chain disruption, persistent inflation, war in Ukraine and the lingering effects of the Covid pandemic as risks to global growth in a briefing on Wednesday, May 18.

He said: “One is the increase in oil prices and the extent to which that persists.

“Energy is a big input to production. [The second is] high inflation in advanced economies leading to tight monetary policy.”

Professor Reis continued: “The war in Ukraine ending would make a big difference. 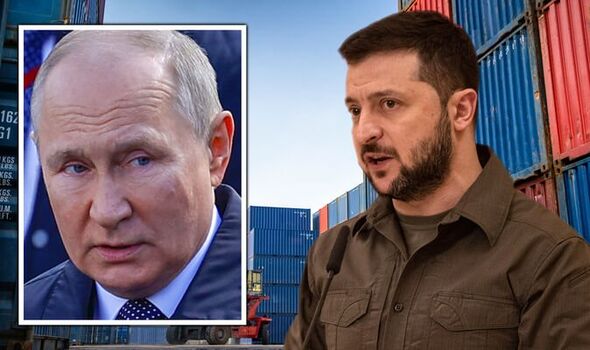 Ending the war in Ukraine would make a ‘big difference’ to the world’s economic fortunes (Image: Getty)

Pressure at the petrol pumps as the price per litre continues to increase (Image: Getty)

“An end to the war would immediately bring some relief, and bring energy prices down.”

But he added that falling energy prices depend on whether or not supplies of Russian fossil fuels increase.

He warned, however, that countries around the world would be affected by a global recession, though those more dependent on oil and gas would be more exposed.

Western countries and the EU vow to end imports of oil and gas from Russia in retaliation over its invasion of Ukraine.

A man walks through the rubble of a building destroyed by shelling in Bakhmut, Ukraine (Image: Getty)

Mourners cry by the coffin of a fallen Ukrainian soldier (Image: Getty)

The prospect of peace appeared some way off this week with the Kremlin saying on Wednesday that Ukraine was showing no willingness to continue peace talks. Officials in Kyiv blame Moscow for the lack of progress.

The last known face-to-face peace negotiations were on March 29. Officials said contacts had continued remotely but both sides said on Tuesday the talks had stagnated.

Kremlin spokesman Dmitry Peskov said on Wednesday: “Negotiations are not progressing and we note the complete unwillingness of Ukrainian negotiators to continue this process.”

Interfax news agency quoted Russian Deputy Foreign Minister Andrey Rudenko as saying Russia and Ukraine were not holding talks “in any form” and that Kyiv had “practically withdrawn from the negotiation process”.

He said on the Telegram messaging app: “Putin is not ready to hold talks. The only chance (for peace) is the destruction of the Russian occupiers. As for when they will be ready to accept defeat, I think it’s a matter of months.”

The British economy unexpectedly shrank in March, marking a weak end to the first quarter of 2022.

Gross domestic product fell 0.1 percent from February, hurt by a slump in car sales due to supply-chain problems, according to the Office for National Statistics.

This left growth in the first three months at 0.8 percent, weaker than the Bank of England’s 0.9 percent forecast.

The International Monetary Fund (IMF) predicts the UK will see the weakest growth and highest inflation among major, advanced economies next year.

On Monday, May 16, the European Commission forecast that Russia’s invasion of Ukraine and the resulting surge in energy and commodity prices will slash euro zone economic growth this year and next, while boosting inflation to record levels.

The Commission cut its growth forecast for the 19 countries sharing the euro to 2.7 percent this year from four percent predicted in February.

Harvard Universty educated Professor Reis also said the second major risk to the global economy is the pace at which interest rates rise over the next 15 months.

He warned this could spark a global recession if not managed properly by central banks.

Professor Reis explained: “Inflation has risen quite a lot over the last six to nine months. Because it is increasing so much, bringing it back requires significant increases in interest rates – which could or should have been done in the last nine months. As a result [central banks] now have to catch up to bring inflation back.

“If done at the right pace, then you would be able to bring down inflation without causing recession. However, if [central banks] increase interest rates too much, that increases borrowing costs which can lead to recession.

“It is still possible – if central banks act swiftly and in time – [to] bring [inflation] back.”

“The skills of the [European Central Bank] and [Bank of England] are going to be put to the test in the next 18 months.”

Professor Reis’s analysis came as two US central bankers said this week that they expect the Federal Reserve to downshift to a more measured pace of policy tightening after July.

In Europe, markets were suddenly pricing in as many as four ECB hikes. The bank has not raised interest rates for 10 years.

IMF Managing Director Kristalina Georgieva said on Thursday it is getting harder for central banks to bring down inflation without causing recessions.

Ms Georgieva explained this is due to mounting pressures on energy and food prices from Russia’s war in Ukraine and China’s zero-Covid policies – which have slashed manufacturing with lockdowns and the need to reorder supply chains to make them more resilient.

Her warning came a day after the pound fell against the dollar following data showing UK inflation rising to a 40-year high.

Strong labour market data earlier this week boosted expectations the Bank of England would have to further increase interest rates, while other data showed that inflation is now running at nine percent- well above the BoE’s two percent target.

Heavy falls in European and Asian stock markets also came on the heels of Wall Street’s reporting its worst day since mid-2020.

This week also saw stark warnings from some of the world’s biggest retailers, emphasising how hard inflation is biting.

Professor Reis suggested that if the UK were to enter into a recession, the Government could support the economy through tax cuts and increased spending to stimulate demand.

“In 2020, the Government’s responses were decisive, swift and ultimately successful. The Government deserves some credit and confidence.”

Professor Reis also praised the Bank of England, saying its independence and targeting of low inflation had resulted in the most successful monetary regime in British history.

He said: “They deserve an enormous amount of credit. I have a lot of trust in the Bank of England given its track record.”

Professor Reis added that a third, more speculative, risk to the outlook for the world economy comes from countries retreating from globalisation.

He told Express.co.uk: “Freedom of trade has been a recipe for great prosperity in the world. To maintain that freedom will benefit us all.”

The body of a man was recovered from...
AMED POST