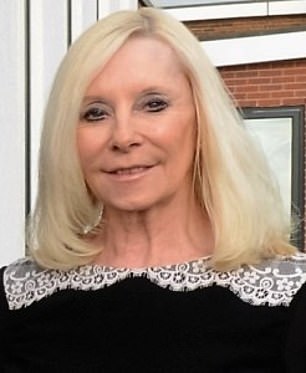 A headteacher has threatened to withdraw pupils from a school in Oldham after children told teachers they had been visiting people outside of their households.

Martine Buckley, executive headteacher at Yew Tree Community School in Chadderton, sent a letter to parents urging them to follow lockdown rules after ‘open and honest’ pupils had told staff they had visited friends, neighbours and family.

She said staff at the primary school are ‘putting their own safety at risk’ to teach the pupils and ‘should be confident’ that parents are following the measures.

She added that anyone breaking lockdown – which bans household mixing – or putting staff in danger, would have their child’s place withdrawn from the school.

In full, the letter, which has been posted on the school’s website and its Facebook page, reads: ‘Dear Parents. I am very upset to be writing this letter but I feel I must.

‘Our lovely children are open and honest and they tell us about their lives and activities.

‘Currently a number of them are telling us that they are visiting friends, neighbours and family which is against the law.

‘Our teachers and support staff are putting their own safety at risk to look after your children and they should be confident that you are doing your bit to follow the lockdown rules. 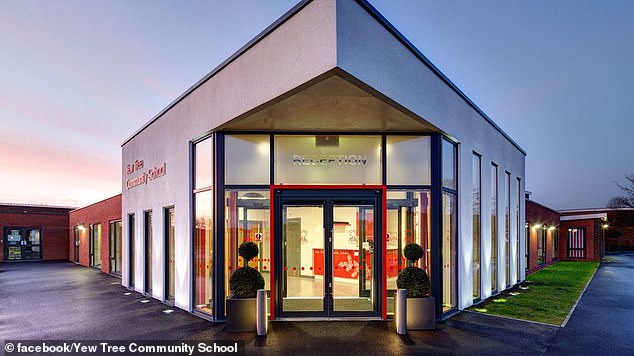 Head Martine Buckley thanked parents who were doing the right thing and said staff should be confident that parents are ‘doing their bit’. Pictured: Yew Tree Community School, Oldham

‘I am afraid that I will have to withdraw the offer of a place in school to children whose parents are putting us in danger.

‘To everyone who is doing the right thing I want to say a huge thank you. I know that this is most of you.

‘I know that home learning is nigh on impossible for too many of you and we all sympathise and feel for you.

‘We will get over this much quicker if we all follow the rules.’

The letter was mostly well-received by parents and the community with many complimenting the approach.

But Mrs Buckley said the school had received some negative feedback which she described as ‘distressing’ in a second letter shared today.

It added: ‘There has been some negativity and that has been distressing – for example a mistaken belief that we are interrogating children.

‘We aren’t. As I say in my letter our children are open and honest and they chat to us, telling us all about what’s important to them. 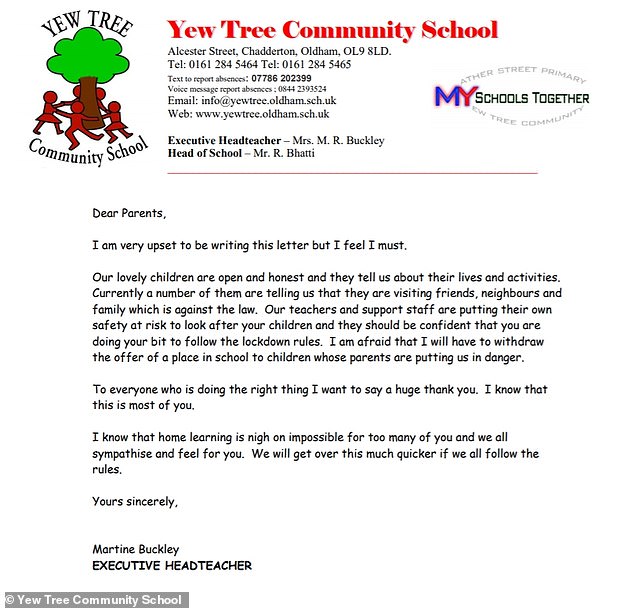 ‘We have spoken to one or two parents about incidents over the past weeks but these have been positive conversations and no child has had their place removed.

‘Our children and their families have been fantastic during these difficult times but we need everybody to try to continue their efforts for hopefully what will be only a few more months.’

Mrs Buckley went on to express pride in the school’s teachers and support staff who she said are all ‘working incredibly hard to teach the children of critical workers and vulnerable children and to provide remote learning for the children at home.’

She added: ‘It is thanks to the staff’s hard work and desire to support the children that we were able to keep school open during the holidays of the first lock down and have offered weekend catch up lessons to 150 children, something we are hoping to grow once we come out of this current lockdown.

‘We will continue to do our best for the whole school community: children, parents and staff.’

Schools across England are currently closed except for vulnerable children or children of key workers.

It is believed that Gavin Williamson, the Education Secretary, will within days rule out the full reopening of schools after the February half-term break.

While no exact date has been reported, headteachers and education leaders expect the push-back could be as late as April or even May. 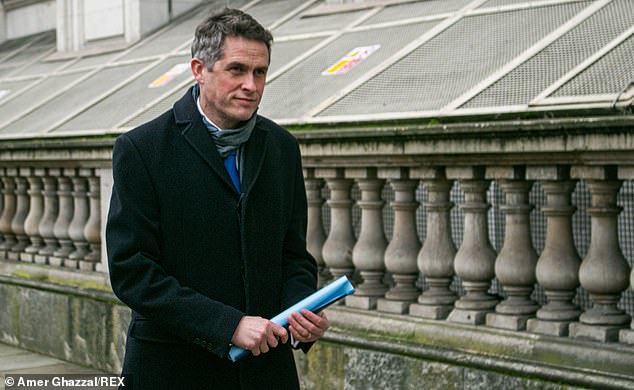 This week, education secretary Gavin Williamson is expected to announce that schools will not reopen after half term. Mr Williamson said parents and teachers would get two weeks notice

On January 4, the government announced that schools would close the next day after a short reopening because of high infection rates across the country.

Mr Williamson then said that parents and teachers would be given two weeks notice for the full reopening of schools.

During a round of media interviews this week, he insisted there would be no repeat of the shambolic episode at the start of this month when schools were ordered to close just one day after returning from the Christmas break.

It comes as a number of MPs have called for teachers and support staff to be prioritised in the Covid-19 vaccine rollout.

Children’s Commissioner for England Anne Longfield has said families need ‘hope and clarity’ about what will come next for children’s education.

She told BBC Radio 4’s Today programme that schools should open ‘as soon as possible’ and called on ministers to set out at Downing Street press conferences what progress is being made towards reopening.

Meanwhile, NHS’s chief executive Sir Simon Stevens said yesterday that teachers could be among those key workers considered for immunisation after the most vulnerable have been vaccinated.

Sir Simon Stevens said there should be a ‘legitimate discussion’ about vaccinating public-facing workers such as teachers after those most at risk have received their jabs.

He also suggested those with learning disabilities should be considered for the next round of vaccinations, and said that this should perhaps happen as early as February.

Calls grow for cabinet minister accused of rape to stand aside