A homeless teenager has become an overnight social media sensation after documenting how he cooks inexpensive, yet innovative meals while he and his mom are living in their car.

TikTok user @randomhomelessguy2, who is believed to live in the U.S., has racked up more than 290,000 followers after posting a video of himself cooking pasta and hotdogs on a hot plate in a local park.

It was the first TikTok he had ever shared on the platform, and in just one day, it has been viewed more than 9.4 million times. Many fans were impressed by both the teen’s resourcefulness and his budding culinary skills. 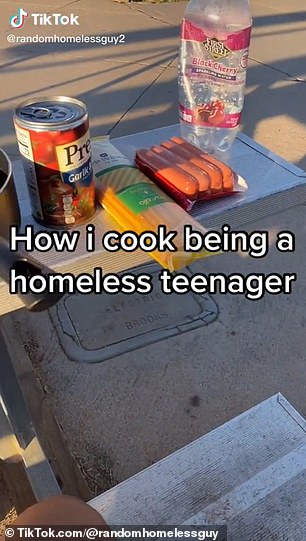 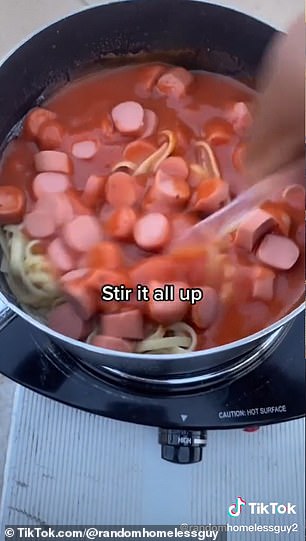 Going viral: TikTok user @randomhomelessguy2, who is believed to live in the U.S., has racked up more than 290,000 followers after posting a video of himself cooking in a park 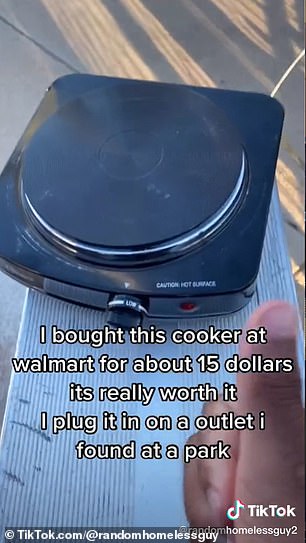 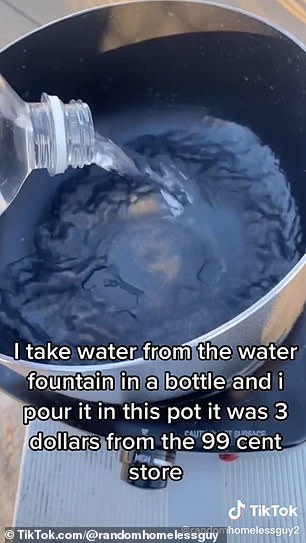 Resourceful: The teen cooks his meals using a $15 hot plate from Walmart and a $3 pot from the 99 cents store. He gets clean water from a public fountain

At the start of the video, he revealed that he cooks his food on a hot plate that he bought at Walmart for about $15.

‘It’s really worth it,’ he wrote, explaining that he plugs the device into an open electrical outlet he found at the park.

The teen then filled a bottle with water from a public fountain and poured it into a $3 pot he bought at the 99 Cents store and brought it too a boil.

While he waited for it to boil, he diced up a package of hotdogs he also got at the 99 Cents store using a plastic knife. 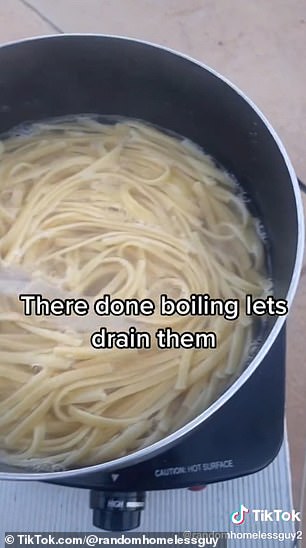 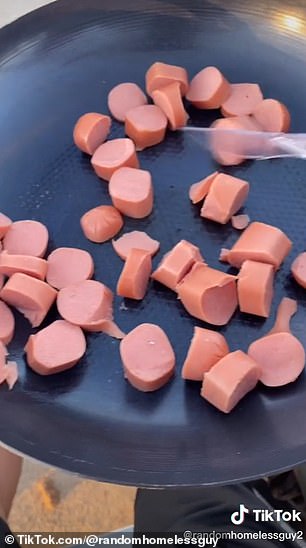 Making it work: The teen boiled pasta and cut up a package of hotdogs, both of which were purchased at discount store 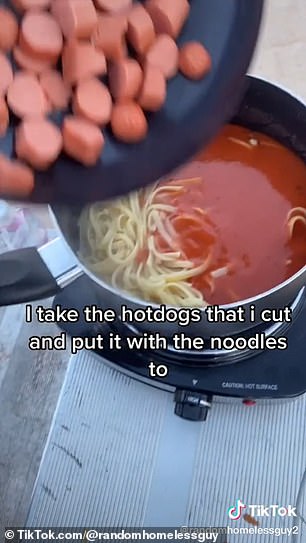 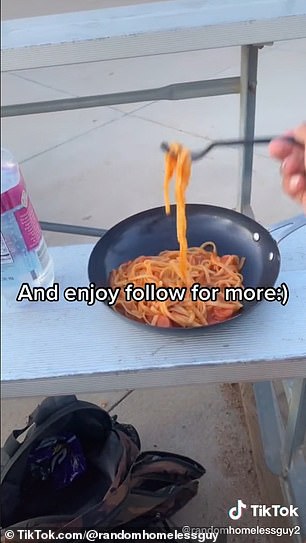 Voila! The TikTok user added a can of tomato sauce and the cut-up hotdogs to the pot and let it simmer before eating

Going viral: Viewers were impressed with the teen’s resourcefulness, and he even got a message from the Spice King. People offered him money, but he insisted he didn’t want it

Once the water was ready, he added pasta that he bought at the Dollar Tree and cooked it to completion before draining it.

To complete his dish, he added a can of sauce that was purchased at the 99 Cents store and the hotdogs, giving the camera a thumbs up while the dish simmered.

At the end of the video, he reminded viewers that he gets clean water from a drinking fountain and plastic utensils can be procured at any restaurant.

As more and more people watched the clip, the more followers he earned. People also took to the comments to praise him and his cooking

‘Man makes better food [than] I do at home,’ one person wrote, while another added: ‘I hope things get better for you. 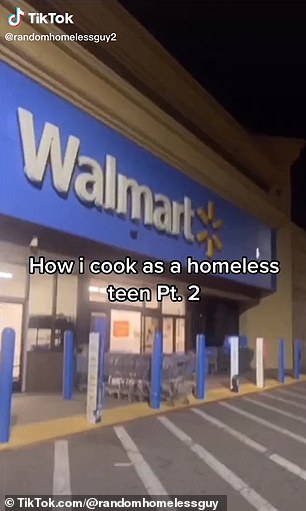 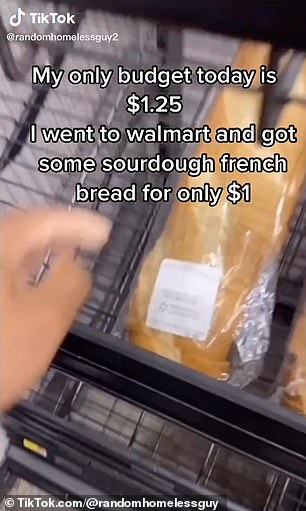 Next up: The teen followed up his viral video of himself another meal, this time explaining that his budget was $1.25 for the day. He went to Walmart and got $1 bread 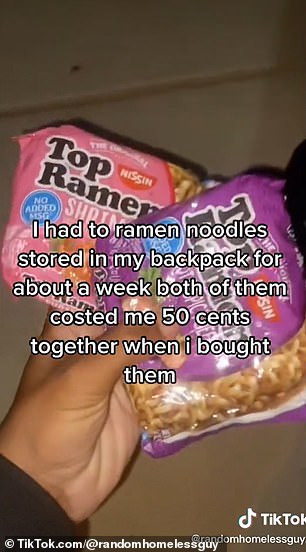 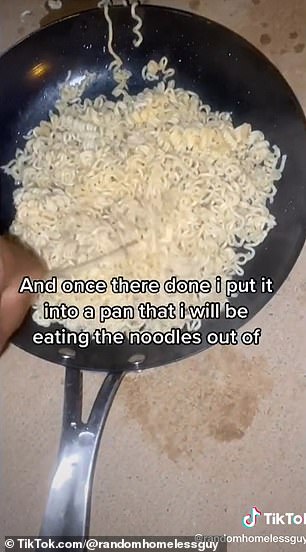 Combination: He had leftover ramen packets in his backpack that he cooked in the park 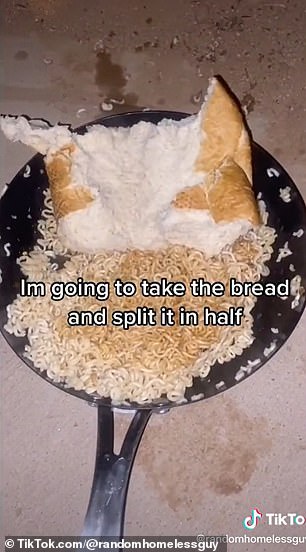 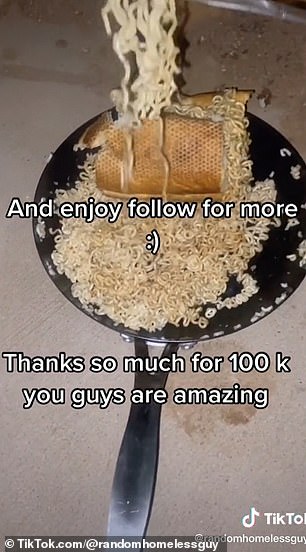 Innovative: The TikToker made a sandwich out of the ramen and sourdough bread

He even got a shoutout from TikTok star the Spice King, who commented: ‘You gon make it out King.’

‘Omg no way spice king it’s such an honor,’ the teen replied.

Some questioned whether he was really homeless because he has a smartphone, but he explained that his mom bought him an iPhone before they were homeless and still pays the bill.

She gets paid on Thursdays, and he is given money for the week to buy food. When she gets off work at midnight, they sleep in her car.

Many people were blown away by his positive attitude and offered him money, but he refused multiple times. 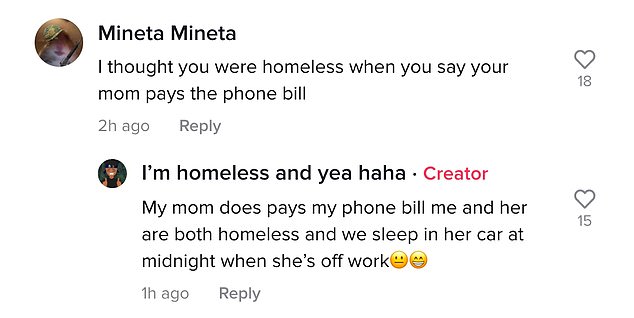 Candid: In the comments section of his videos, he explained that his mother bought his cellphone before they were homeless and still pays the bill. They now sleep in her car

‘Btw guys it’s fine. I don’t want your money haha,’ he wrote, ‘but thx for your support and nice words. They mean a lot.’

The teen followed up his viral video of himself another meal, this time explaining that his budget was $1.25 for the day.

‘I went to Walmart and got some sourdough French bread for only $1,’ he captioned the footage of himself in the store.

Back at the park, he cooked two leftover packs of ramen and made himself a ramen sandwich using the bread he had just purchased.

In just 10 hours, the video earned more than 1.1 million views.

‘Can we just appreciate that no matter the situation this guy is in, he still makes the most of it and is happy,’ one TikTok user noted. ‘Not many people have that.’

TikToker reveals she found out she was dating her COUSIN