For more than 20 years, millions of savers have relied on cash Individual Savings Accounts (Isas) to protect their nest eggs from the taxman. But the death knell is now ringing for cash Isas as savers chase better rates available across the wider savings market.

The latest Government statistics show that the amount paid into cash Isas has plummeted by £12billion over the past year. One of the key reasons for this is the scandalously low interest rates most banks and many building societies are offering savers – a fact highlighted by The Mail on Sunday’s Give Savers A Rate Rise campaign.

Over the past 12 months, a widening gap has emerged between the interest rates that banks are willing to offer on standard savings rates and what Isa savers can get. 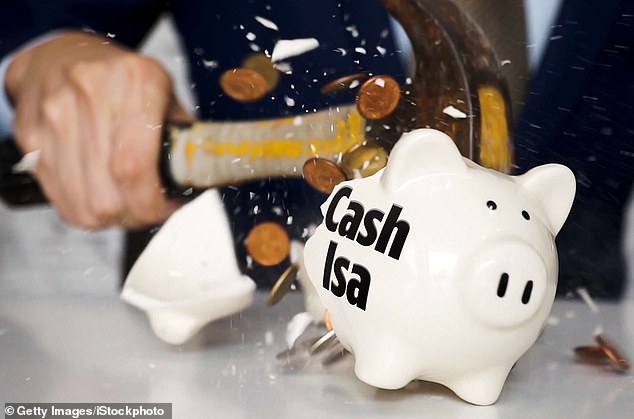 Breaking the bank: The latest Government statistics show that the amount paid into cash Isas has plummeted by £12billion over the past year

For example, savers looking for a new account can get a best buy rate of 2.57 per cent fixed for a one-year bond from Cynergy Bank.

On a two-year fixed rate savings bond, the best rate is from Cynergy Bank at 2.88 per cent. The best equivalent Isa is from Virgin Bank at 2.25 per cent, resulting in £126 less of annual interest on £20,000.

For three-year fixed-rate savings bonds, the best rate (again) is from Cynergy Bank at 2.9 per cent. The best three-year savings bond cash Isa is from building society Buckinghamshire at 2.3 per cent – an annual interest shortfall of £120.

Head away from the best buy deals and the gulf between cash Isa rates and traditional savings account rates is even more stark.

Research by financial data scrutineer Moneyfacts indicates that more than half of banks and building societies are paying a lower interest rate on their cash Isas than on their standard savings accounts.

In some cases, individual banks are paying as much as six times more interest on their ordinary accounts compared to their Isa equivalents. The big high street banks are the exception (see box below) – but only because their standard savings account rates are often equally poor.

A stark example of how cash Isas are lagging behind standard accounts comes from Al Rayan Bank. Its one-year fixed rate savings bond pays a competitive 2.4 per cent. But its cash Isa equivalent pays just 0.4 per cent.

This allows basic rate taxpayers to earn up to £1,000 in interest per tax year before they start paying tax on their savings income – and higher rate taxpayers up to £500. The allowance is not available to those earning more than £150,000 a year.

This means a basic rate taxpayer can save up to around £38,500 in the best buy one-year bond from Cynergy Bank without worrying about tax. For many savers, this makes cash Isas and their woeful interest rates not worth the bother.

Bowes says: ‘In the past, I would always urge tax-paying savers to ensure that they didn’t miss out on the chance to shelter some of their hard-earned savings in a tax-free cash Isa. But the introduction of the personal savings allowance has changed things. Plus the fact that many banks have failed to ratchet up cash Isa rates in line with those available on their other savings account offerings.’

Bowes says that one of the reasons why cash Isa rates are suppressed is because they are more expensive for banks and building societies to operate – a result of ensuring savers are not breaking or abusing the Isa rules.

‘With a smaller number of accounts on offer, you don’t get the same level of competition pushing rates up as you do in the wider savings account market,’ she says.

What savers should do depends on the amount of savings they have and their income tax band. For example, someone with £100,000 sitting in a cash Isa could move it into the best one-year fixed rate Isa with Virgin Bank and receive £2,000 interest over 12 months.

The overall interest they would get is £2,256, making them £256 better off than being in the best equivalent cash Isa account from Virgin Bank.

The numbers for a higher rate taxpayer are different. Given they only receive a £500 annual personal savings allowance, moving the same £100,000 from a best buy, one-year fixed-rate cash Isa into an equivalent non-Isa would not make sense.

Of the £2,570 interest they receive, £2,070 would be taxed at 40 per cent, resulting in annual interest net of tax of £1,242. The other issue to consider is what happens if your salary increases, or interest rates rise.

If your salary increases, you could move up an income tax bracket and find your personal savings allowance halved or disappearing altogether. You may then crave the protection of a cash Isa, but you could only then rebuild your cash Isa pot at a rate of £20,000 a tax year. Similarly, as savings rates rise in response to increases in bank base rate, more savers will start to earn interest above the annual personal savings allowance, in the process incurring tax on the excess.

‘There are some people for whom a cash Isa is still the right choice,’ insists Coles. ‘They include additional rate taxpayers and higher rate taxpayers with large savings balances.

‘An alternative solution is to ditch your cash Isa in favour of an investment-based Isa. Although stock markets are in volatile mode, the long-term returns from investing in equities historically outstrip anything you can get with cash, and investment returns could beat inflation which cash savings simply cannot do.’

Shaun Moore, tax and financial planning expert at wealth manager Quilter, says: ‘Even the best interest rates on cash Isas at the moment will do nothing to stop the rotting effect of inflation on people’s savings which are losing value all the time.’

Most of the big banks are currently paying more interest on their easy access cash Isas than on equivalent non-Isa accounts.

But experts say big bank cash Isa savers should not stay put – they should transfer their balances to a provider paying far superior interest rates.

According to data from rate scrutineer Savings Champion, a NatWest Cash Isa customer is currently receiving paltry interest of 0.1 per cent – equivalent to £20 of annual interest on £20,000 of savings. Yet if they were to transfer their Isa to Paragon Bank (triple issue 8) paying 1.2 per cent, they could boost their annual interest by £220 – provided they are comfortable with the fact that only three withdrawals are allowed per year in the Paragon account.

Halifax Isa Saver Variable Saver pays 0.2 per cent interest – more than the bank’s equivalent instant access account Everyday Saver which pays 0.15 per cent interest. Yet transferring to Paragon still makes financial sense. Of the big banks, Santander’s eIsa (managed via mobile banking or online) is the most attractive easy access cash Isa, paying 0.7 per cent (0.8 per cent if you are a ‘select’ Santander customer).

This is far better than the 0.25 per cent it pays on its equivalent eSaver account, but the annual interest of £140 does not stand up to Paragon’s £240.

THIS IS MONEY’S FIVE OF THE BEST SAVINGS DEALS

The bloc's single currency was as high as...

After gunfire rang out during a mass shooting that...

Craig Rowe has been buying and renovating properties...
AMED POST

The bloc's single currency was as high as...

After gunfire rang out during a mass shooting that...