The confirmation came after Russian defence ministry spokesperson Igor Konashenkov claimed that the “Kinzhal” — literally, “dagger” — missiles had been used to destroy a subterranean Ukrainian weapons depot on Friday. He told AFP: “The Kinzhal aviation missile system with hypersonic aeroballistic missiles destroyed a large underground warehouse containing missiles and aviation ammunition in the village of Deliatyn in the Ivano-Frankivsk region.” And on Sunday, Russia added that they had also used the hypersonic missiles to destroy a fuel depot near the city of Mykolaiv.

As of yesterday, Ukrainian officials had confirmed the destruction of the weapons depot, although they were unable to provide any more details on the nature of the attack.

The Pentagon, meanwhile, remained initially tight-lipped on whether Kinzhal missiles were used — asking instead why Russia would resort to using weapons designed for long-distance targeting on Ukraine, a neighbour in close proximity.

However, last night saw President Biden relent and provide confirmation, with the speculation that Putin’s forces were resorting to using the advanced missiles because they were having both targeting and supply problems with more conventional precision weapons.

According to ABC News, President Biden told reporters at the Business Roundtable’s CEO Quarterly Meeting in Washington, DC, that Kinzhal missiles were “the only thing that they can get through with absolute certainty”.

He added: “It doesn’t make that much difference, except it’s almost impossible to stop it. There’s a reason they’re using it.”

According to the Arms Control Association, while the US is also developing hypersonic missiles, they are unlikely to have an equivalent system ready until next year at the earliest. 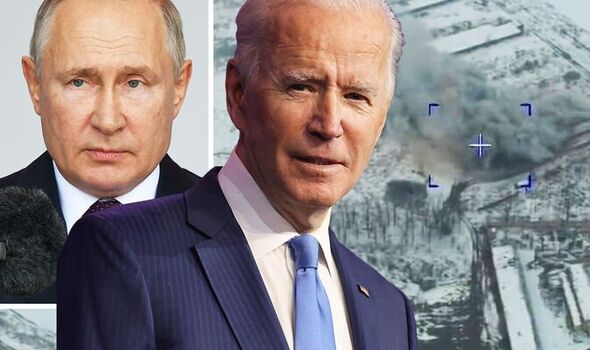 First publicly unveiled by Russian President Vladimir Putin on March 1, 2018, the Kh-47M2 Kinzhal air-launched hypersonic missile system — which he called “the ideal weapon” — is said to have a maximum operating range of 1,800 miles.

Prior to the missile’s release, its carrying aircraft accelerates to its maximum possible speed, which in the case of the MiG-31K fighter jet is 1,864 miles per hour.

After disconnecting from the aircraft, the missile fires up its solid-propellant-driven engine and accelerates to some 10–12 times the speed of sound — around 7,670–9,200 mph.

The MiG-31K fighter jet is reported to be intended as the primary carrier of the Kinzhal missiles (Image: Creative Commons / Dmitriy Pichugin)

It is believed that the Kinzhal was developed from Russia’s ground-based Iskander-M missile system (Image: Creative Commons / Алексей Иванов / Mil.ru)

At such speeds, the physical properties of the airflow around the object in question begin to change significantly while heat generated as a result of friction and air resistance mandates greater thermal shielding — and this is a big part of what makes hypersonic flight challenging from an engineering perspective.

However, according to TASS, a state-owned Russian news agency, “The Kinzhal missile is capable of manoeuvring at this speed and remaining actually invulnerable to the air defence and anti-ballistic missile systems existing today.”

The sheer speed of such hypersonic missiles is also what makes them better able to penetrate heavily shielded targets — such as, for example, the underground weapons depot that Russia reportedly destroyed this weekend.

It is believed that the Kinzhal was developed by building on the aero-ballistic missile of Russia’s ground-based Iskander-M tactical missile system, which has an operational range of around 311 miles.

Analysts said the introduction of the hypersonic weapons is likely to do little to change the war (Image: Express.co.uk)

Each Kh-47M2 customarily carries a payload of around 1,000 pounds of a high-explosive warhead — however, they can also be armed with a similarly-sized nuclear weapon that explodes with the force of 100,000–500,000 tonnes’ worth of trinitrotoluene (TNT).

According to TASS, Kinzhal missiles have been in deployment as part of “experimental combat duty” since at least December 2017.

In July the following year, for example, a squadron of MiG-31K fighter jets carrying the hypersonic armaments is said to have performed joint tactical flight drills with Tu-22M3 long-range bombers over Russia’s Southern Military District.

While the MiG-31K fighter jet is reported to be intended as the primary carrier of the Kinzhal missiles, it is understood that several can also be loaded into Tu-22M3 bombers.

It is believed that the last week represents the first time that the Kinzhal missile system has been used against Ukraine — and, in fact, outside of Russia itself and in an actual combat situation.

Russian analyst Pavel Felgenhauer told the Guardian that the introduction of the hypersonic weapons to the battlefield in Ukraine is likely to do little to change the situation on the ground.

However, he added, it may give a “certain psychological and propaganda effect” — while simultaneously creating the impression that, perhaps, Russian forces were running out of other weapons.

These sentiments were echoed by Belgian defence expert Joseph Henrontin, who mused on Twitter that Russia may be running low on or having difficulty locally deploying Iskander missiles, or perhaps that Putin was flexing his proverbial muscles by utilising a missile that is known to also be able to carry nuclear warheads.

Biden, in Tokyo, says US would send military if China...
AMED POST