Ukrainian MP warns EU ‘will be next’ if Putin wins war

The legendary broadcaster returns to Channel 4 for a new programme entitled ‘What If Putin Goes Nuclear’ tonight at 6:30pm. In the feature-length documentary, Mr Snow explores what the threat of nuclear war might mean after Putin put his strategic nuclear force on high alert. Putin has made veiled threats to the West of severe and potentially nuclear retaliation if they intervene in Russia’s invasion of Ukraine.

In the film, Mr Snow will attempt to unpick why Putin is threatening nuclear escalation, what it means for the war in Ukraine and the implications it may have for the UK and the world.

Tensions between Russia and the West have been escalating for years, and almost reached a fever pitch in 2014 after Putin ordered the illegal annexation of the Crimean peninsula.

Russia was hit with sanctions that coincided with a global drop in oil prices, which caused the Russian economy to tank.

However, at the time, Mr Snow pondered whether the West was in part responsible for Putin’s move into Crimea. 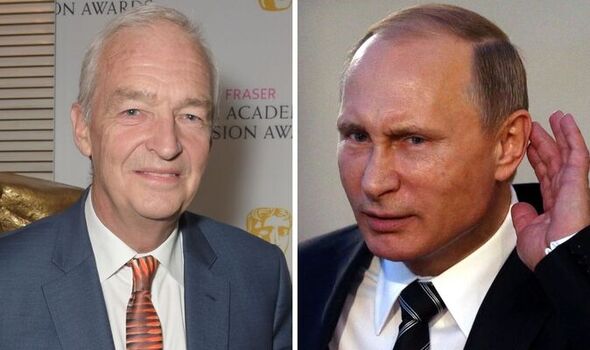 Mr Snow explores what the threat of nuclear war might mean (Image: Getty)

He claimed that we needed to abandon “Cold War thinking”, look at Ukraine from a “Russian perspective” and try to see where the EU and NATO went wrong in their handling of Russia.

Mr Snow wrote in a Channel 4 column: “In a quarter of a century, the Russian empire has lost Yugoslavia, Romania, Bulgaria, Hungary, Georgia, Czechoslovakia, Poland, Latvia, Lithuania and Estonia.

“There is a new NATO/Russia frontier. Did the EU and NATO even talk too soon of bringing Ukraine into the European Union’s family of nations?”

The veteran broadcaster continued: “How many knew that there were 25,000 Russian troops permanently stationed in Crimea, by agreement? Knew the Russian fleet was there, by agreement?

Putin ordered the illegal annexation of the Crimean peninsula in 2014 (Image: Getty)

“So in short, once you know how vital these facts are to Russian security in the Black Sea and beyond, you begin to see how ‘change’ in Ukraine sets up deeply uncomfortable emotions in both the Kremlin and further afield.

“There is very little evidence that EU or American diplomats consulted with Moscow about what was happening in Ukraine.

“Yet it had been evolving for several years and more.”

Mr Snow asked: “Might it not be more profitable, before doing anything else, to try to work out where we all went so wrong?

“Did the EU and NATO ever try to look at Ukraine from a Russian perspective? What is Russia’s problem?”

The broadcaster argued that the West needed to observe the common goals they share with Russia, rather than brand their actions as “grotesque”.

He continued: “Not only is Europe highly dependent on Russian gas and financial investment, but Moscow also shares many of the same concerns that Europe and America have over the rise of Islamic fundamentalism and the spread of jihadism.

“In the aftermath of what is perceived to have been grotesque Russian violations of international law, bullying and worse, it is perhaps easy to revert to Cold War thinking.

NATO are united in standing up to Russian aggression (Image: Getty)

“But given global military and diplomatic failures in Syria, Iraq, Libya, Yemen and beyond, perhaps we have higher priorities than name-calling the Russians.”

However, despite the broadcaster’s 2014 call for diplomacy, Putin spent the following eight years in power systematically trying to weaken and undermine the West.

Yet, his invasion of Ukraine seems to have achieved the opposite, with the international community having united to condemn and act against Russian aggression.

Ian Bremmer, president of political risk consultancy Eurasia Group told CNBC last week: “NATO is united ‒ more so than at any point since the Soviet collapse ‒ with a renewed sense of purpose and mission.

“So too is the European Union: Germany supports ending their economic dependence on Russia and is nearly doubling their defence spend. France is on board.

“Even Moscow-tilting Hungary has condemned the invasion, favouring a crippling sanction regime and allowing in hundreds of thousands of Ukrainian refugees.”

Meanwhile NATO mutual defence is on standby if Russia attacks any NATO member state, as is feared with Putin’s invasion moving westward through Ukraine.

NATO Secretary General Jens Stoltenberg said: “NATO’s core task is to protect and defend all allies. There must be no room for miscalculation or misunderstanding.

“An attack on one will be regarded as an attack on all. This is our collective guarantee.”

Watch ‘What If Putin Goes Nuclear’ tonight at 6:30pm on Channel 4.

Previous articlePutin shame: Sugar delivery causes desperate scramble in Russian supermarket – VIDEO
Next articleCut taxes to make gas cheaper? Maryland and Georgia try it temporarily — and other states might too.

Earlier this month, Lady Louise Windsor took part in the...

Earlier this month, Lady Louise Windsor took part in the...