Jordyn Woods shows her support for boyfriend Karl-Anthony Towns with sweet message following his COVID-19 diagnosis: ‘You got this’

By Sam Joseph Semon For Dailymail.com

On Saturday, Jordyn Woods took to her Instagram story to wish her boyfriend Karl-Anthony Downs well in his fight against COVID-19, as he recently tested positive for the disease.

The 23-year-old social media personality informed her followers that she and her family were doing well in the midst of the global pandemic, yet asked for people to pray for her beau to quickly overcome his condition.

She wrote on her story: ‘My family and I all got tested for COVID and the results came back negative so we are all good but continue to pray for Karl for a speedy recovery.’ 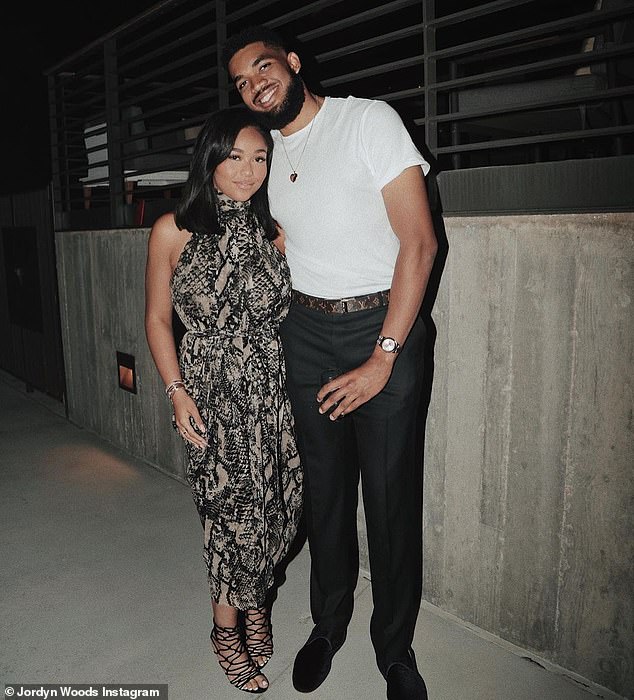 Wishing well: On Saturday, Jordyn Woods posted a message to her Instagram story encouraging her boyfriend Karl-Anthony Towns to stay strong in his fight against COVID-19, as he recently tested positive for the disease

Woods also wrote a message to Towns encouraging him to keep fighting off the disease, which his mother and six of his family members unfortunately succumbed to earlier this year; the athlete’s father also contracted the virus and eventually made a full recovery.

‘You’re a true fighter this is not fair or right that you were put in this position when you were just trying to do your job. You got this,’ she noted.

Towns initially let his fans know that he had tested positive for coronavirus on Friday with a message posted to his Instagram account. 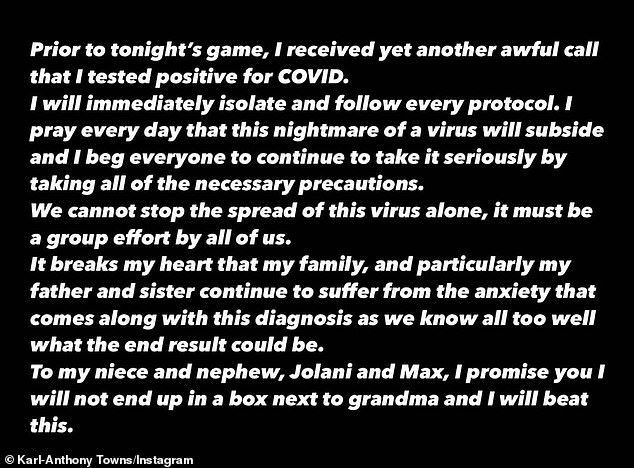 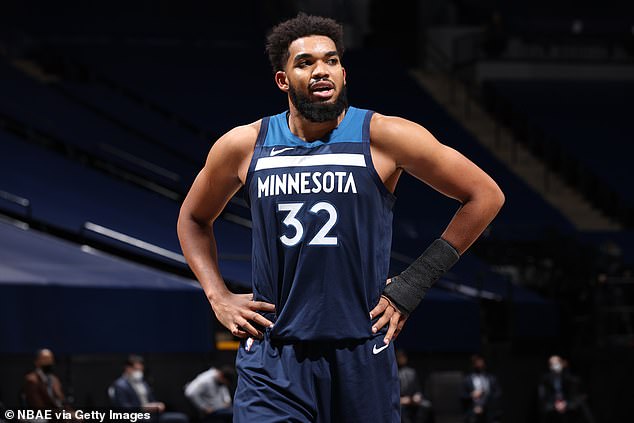 Devastating effects: The Minnesota Timberwolves teammate’s mother previously succumbed to the effects of COVID-19 along with six of his family members; he is seen competing during Wednesday’s game against the Memphis Grizzlies

‘Prior to tonight’s game,’ the 25-year-old wrote, ‘I received yet another awful call that I tested positive for COVID-19.

The Minnesota Timberwolves center and power forward noted that he would keep his teammates safe in the light of the bad news, writing that: ‘I will immediately isolate and follow every protocol.’

‘I pray every day that this nightmare of a virus will subside and I beg everyone to continue to take it seriously by taking all of the necessary precautions,’ he stated.

Towns then implored his followers to follow the national guidelines regarding safety measures for the virus and opined that the eventual eradication of COVID-19 would require a shared effort on the part of the nation. 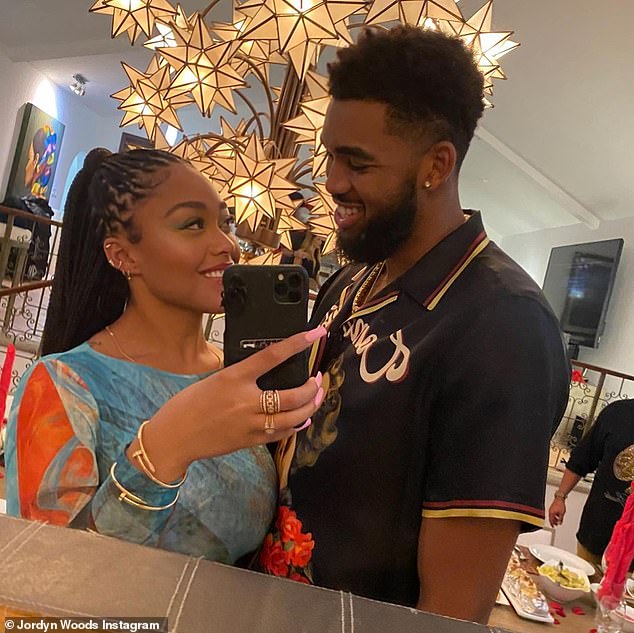 Not taking chances: Towns wrote that he would be following the recommended safety guidelines during his battle with the disease, stating that he would ‘immediately isolate and follow every protocol’

He also made a reference to the virus’ impact on his own family, and wrote that many of his loved ones were still suffering from anxiety regarding the effects of COVID-19, as he wrote that they knew: ‘all too well what the end result could be.’

Towns then wrote to his niece and nephew that he would stay as strong as he could throughout his time with the disease.

In October, the social media personality spoke to Page Six regarding her beau and how their shared grief over the loss of a parent strengthened their relationship.

Woods said: ‘After his mother passed it brought us a lot closer because I had gone through the loss of a parent as well, and so being that crutch for each other, I guess led to something more and it’s like being with your best friend.’ 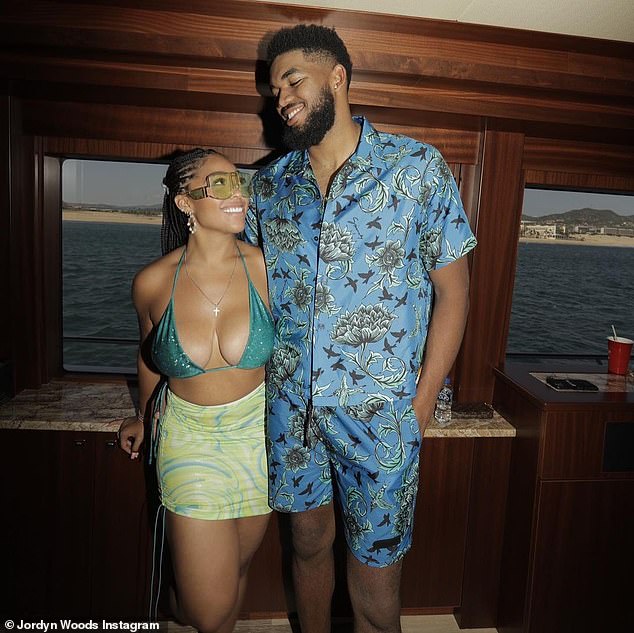 Support: Woods stated in an interview with Page Six that she and Towns bonded over the shared loss of a parent, and noted that the pain of coping with their experiences ‘brought us a lot closer’

Diabetes type 2 symptoms: Do you experience ‘halitosis’ when you breathe? Warning sign

Bruno Mars shrugs off long-running cultural appropriation allegations: 'It comes with the gig'