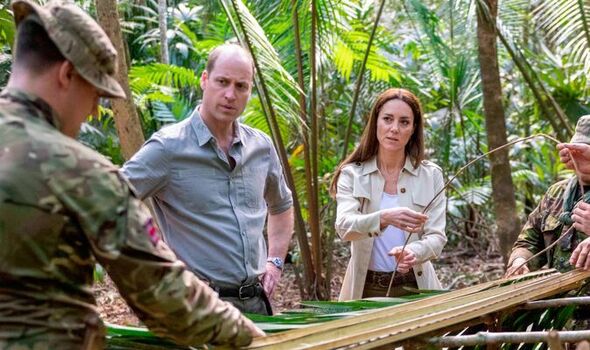 William and Kate trekked into the undergrowth to be greeted by British and Belizean soldiers working side by side at the British Army Training Support Unit (BATSUB).  It was a return visit for William, 39, who spent time with the specialist unit in 2000 at the start of his gap year before university.

There was also as a chance for him to be reunited with his former academy sergeant major at Sandhurst who now runs the jungle unit.

The royal couple spent more than an hour and a half being taken on a crash course in survival techniques. Most British soldiers spend 6-8 weeks in the Belize jungle as part of their training.

Arriving at the BATSUB HQ, dubbed The Schoolhouse, the couple were briefed on the five main pillars of survival in the environment, namely cooking; animal traps; shelters; water capture and fire.

Before the Duke and Duchess’s arrival, BATSUB squaddies spent five days cleaning a portion of the jungle with machetes to set up camp and give the royals “a truly authentic jungle experience”.

William and Kate were shown how to boil water using a plastic bottle dangling over a fire, fashion a bamboo tree to use as a pressure cooker and sharpen a bamboo spear to create a medieval type weapon to trap and kill monkeys and birds to eat.

After watching a demonstration of a guillotine contraption used to kill a wandering jungle animal William was beckoned to use the next assault weapon capable of stabbing an animal through the heart to use for much needed food in the jungle.

Looking at a guillotine styled trap, suspended 15feet in the air from a tree, William turned to the press pack gathered to the side of the contraption and joked: “Ah, it could trap the media!“ as Kate burst into laughter.

At the shelter section in another small part of the jungle William demonstrated his former army training by expertly splitting a giant palm leaf down middle to be used for shelter.

Cheered on by half a dozen soldiers and wife Kate, 40, William declared “It’s all coming back now!” as he carefully executed the task.

As he lifted it on to a roof already fashioned by the squaddies, impressed Kate said: “It’s really sturdy, it’s amazing.”

At the next station where Kate and William both poked their heads into a man-made tent fashioned from palm leaves, one soldier described how it could be built in stormy weather in less than 10 minutes “for one or two people”.

Learning the five main pillars of survival in the environment (Image: GETTY)

Poking his head in the front William said: “Well if there’s two of you you’ll certainly be good friends after a night in there.”

At the penultimate section the couple were able to handle a huge water vine hacked down with a machete as William roared: “Ray Mears eat your heart out.”

As they were helped to raise the giant vine aloft to take a drink of water William suddenly rocked back laughing, saying: “It’s got a bit of bark in it! Nothing wrong with a bit of Belizean bark.”

On the final stop of their quick fire survival lesson Kate and William were wowed by the skills of a Belize soldier who demonstrated the art of creating a flame by vigorously rubbing two pieces of bamboo together.

“Thanks for all you do and good luck with with everything” (Image: GETTY)

As Kate looked on William congratulated the solider saying: “You did far better than me, I wouldn’t have even got the smoke going.”

Before leaving the Duke and Duchess were able to learn about the close cooperation between the British Army and conservation organisations such as Friends for Conservation and Development (FCD) and animal welfare charity Panthera.

Both organisations are working to protect and promote the Chiquibul Forest, which is part of The Queen’s Commonwealth Canopy.

The couple were handed two pictures of majestic jaguars which are part of a revolutionary tracking programme in the local jungle and were named William and Kate in their honour.

A special reception hosted by the Governor General of Belize (Image: GETTY)

After being told the programme of the two big cats will help conservationists learn more about their habitats and behaviours William said: “That’s very kind. I hope it will serve them well.”

Following a group picture with the BATSUB team before leaving William said: “Thanks for all you do and good luck with everything.”

After being reunited with William and meeting Kate for the first time, BATSUB commander Lieutenant Colonel Simon Nichols, his former academy sergeant major, said: “It was great to see Prince William again as it always is.

“I was lucky enough to work with William and Harry during their time at Sandhurst.

“William has aged gracefully and much the same man as I remember.

“I hope their time here was useful and they enjoyed themselves.

“Every time I am in the jungle you learn a lot, every day is a school day in this environment.

“If there was one lesson I hope they took away with them it is the power of the collaboration between the British army and the NGOs such Panthera and Friends for Conservation and Development.

“The jungle is their Crown Jewels and we all have a duty to protest them for each other.”

Journalist Isabel Oakeshott said there was a "creeping...
AMED POST