The Duke and Duchess of Sussex have been tipped to make an appearance on stage at the awards show, which drew around 9.23 million viewers in 2021. But they have a fraught relationship with media coverage and said they wanted to have a different dynamic with the public eye after stepping back from the Royal Family.

Darren Grimes, activist and journalist, scorned the Duke and Duchess’s insistence on privacy in light of their reported appearance on stage for the Oscars.

The GB news host tweeted: “I just wish the media would leave this selfless pair alone to present Hollywood awards to an audience of millions in privacy!!!”

Prince Harry, 37, and Meghan, 40, could be handing out the top prize at the Dolby Theatre in Hollywood on Sunday.

A source based in the US claimed Harry and Meghan were initially approached two years ago, but “politely declined” to hand out an award. 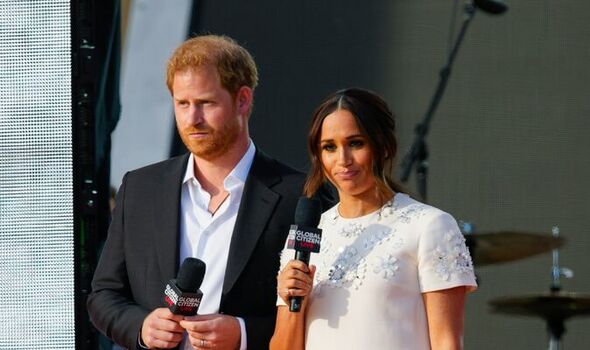 Harry and Meghan have a fraught relationship with media coverage (Image: Getty)

They sought a different dynamic with the public eye after stepping back from royal life (Image: Getty)

They added: “Obviously they’d be a huge coup this year, and could use their appearance to make an impassioned speech of their choosing, most likely Ukraine.”

The Duke and Duchess have made donations to various charities supporting humanitarian work in war-torn Ukraine via their Archewell Foundation.

The US source continued that the Duke and Duchess hosting a segment of the awards ceremony would be “the icing on the cake” for the Oscars’ producers.

They said: “Show producers Will Packer and Shayla Cowan have lined up some amazing A-list names to take to the stage and Harry and Meghan would be the icing on the cake.”

Prince Harry will not return to the UK for a memorial service dedicated to his late grandfather (Image: Getty)

But the source cited the recent controversy over which events the Duke of Sussex chooses to attend as a key reason why the couple would not stand up and present the award at the Dolby Theatre.

They said: “It’s still up in the air, but in all likelihood — especially in the wake of recent publicity — Harry won’t attend.

“It would be seen as a final kick in the teeth for the Royal Family if he did — he’s too nervous to fly to London without police protection, but happy to stand up in front of a huge live audience at the Dolby Theatre in Hollywood. Not great optics.”

A spokesperson for the Duke of Sussex confirmed earlier this month that Prince Harry would not return to the UK for a memorial service dedicated to his late grandfather, Prince Philip.

Only 30 people were permitted to attend Prince Philip’s funeral at the time (Image: Getty)

The Duke of Sussex’s return to the UK has been complicated by the ongoing legal battle surrounding police protection for the Sussexes, should they touch back down on British soil.

The service, looking at Prince Philip’s life, will take place on Tuesday, March 29 at Westminster Abbey.

A number of senior European royals have confirmed their attendance, and will offer guests the chance to reflect on the accomplishments of the Duke of Edinburgh.

Only 30 people were permitted to attend Prince Philip’s funeral at the time, due to coronavirus restrictions that were enforced last year.

The Queen is said to be hoping to attend her late husband’s Service of Thanksgiving, despite a number of absences from royal engagements in recent months.

The Queen, who turns 96 in April, last appeared at Westminster Abbey with a walking stick, and has since tested positive, and recovered from, COVID-19.

The Mirror’s Royal Editor, Russell Myers, told The Royal Beat that the Queen’s attendance hung “in the balance” as she had “less good days”.

He said: “Just weeks away from 96, she has accepted her own limitations.

“She’s having issues moving around, [and is] described by people at the Palace as having good days and less good days.

“I don’t think we’ll ever see her step back, but we probably will see her less and less.

“Will she make Prince Philip’s memorial service in a few days? That’s in the balance.”

A leading education expert described the factsheets as...
AMED POST