The Duke of Sussex will not return to the UK this month for Prince Philip’s thanksgiving service. It recently emerged that the Duke will not join his family at the March 29 service at Westminster Abbey, but that he plans to visit the Queen as soon as possible, according to his spokesperson. Her Majesty celebrates her Platinum Jubilee this year and is the first British monarch to reach the milestone.

The Queen’s 70 years on the throne will be celebrated throughout the year and will culminate in a four day bank holiday from June 2 to June 5.

It is not yet known at what time, if any, that Harry will return, and whether his wife Meghan Markle and their two children, Archie and Lilibet, will be in tow.

The Sussexes live in California within the gated community of Montecito.

Their shock exit from the Firm in 2020 was followed by a tell-all interview with US chat show host Oprah Winfrey.

The allegations made during the bombshell interview rocked the Royal Family, with the rift yet to be resolved, according to reports. 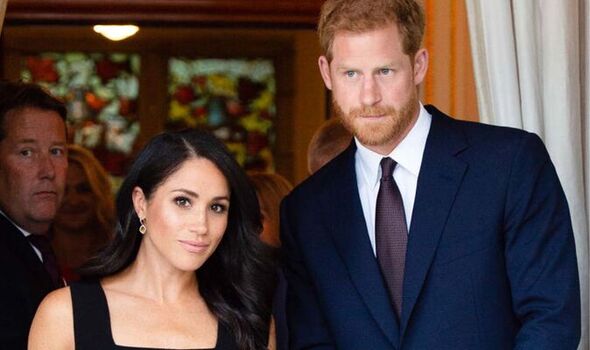 Meghan and Harry left the Firm in 2020. (Image: Pool/Samir Hussein/WireImage)

The Royal Family were rocked by the Sussexes’ exit and their subsequent allegations. (Image: Dominic Lipinski-WPA Pool/Getty Images)

Now, Richard Fitzwilliams, a royal expert, has issued a stark warning for the pair, urging them to stop “knocking the British Royal Family”.

Last week, he told the To Di For Daily podcast: “They clearly are resentful, but if they wanted, or whatever future they wanted, they’re completely unpredictable in my opinion.

Mr Fitzwilliams added that the royal couple can be “very destructive” and that Harry’s memoir would only further exacerbate the tensions between the Sussexes and the Royal Family.

He said: “They have a very destructive side and Oprah showed that very clearly.

“So my advice… they’re always talking about freedom and positivity, which is excellent!

“But there’s no positivity if Harry produces a book which is going to cause harm in the Jubilee year to the Queen.

“So, if you talk positive — it’s high time they acted positive when it came to the Royal Family.”

Last year, Harry announced his plans to release a memoir discussing the “highs and lows, the mistakes, the lessons learned” in his life so far.

While the exact content is under wraps, the Royal Family has been warned the Duke has “plenty to tell”, and that the book is expected to be “controversial”.

It is unclear whether Meghan and Harry will return for the Queen’s Platinum Jubilee celebrations. (Image: Chris Jackson/Getty Images)

Speaking to Express.co.uk, royal commentator Jonathan Sacerdoti said: “I think we can expect to see some controversy from that book.

“I don’t think publishers pay that kind of money unless they expect to get something quite substantial in return.

“Also, he’s got plenty to tell. He’s got quite a life story that people are interested in reading about.

“I suspect we might be seeing some of that but exactly what they bring out next, I don’t know.”

According to Penguin Random House, the book’s publishers, Harry’s memoir will “share, for the very first time, the definitive account of the experiences, adventures, losses and life lessons that have helped shape him”.

Should Harry’s book be published in the year of the Queen’s Platinum Jubilee? Let us know what you think in the comments section.

Harry’s book could be an uncomfortable read for the Royal Family. (Image: Chris Jackson/Getty Images)

The Telegraph’s associate editor Camilla Tominey has claimed that the Queen’s lawyers will pore over the memoir before it goes to publication.

She said: “On one hand, Harry reserves the right to write up his life story in any way that he sees fit.

“It is interesting and it’s probably the strongest shot across the boughs that we’ve had throughout the whole of the so-called Megxit saga with this briefing that we were given some weeks ago suggesting that the Queen’s lawyers would be poring over every line.”

She added that Harry would need to be “very, very careful” that the book is legally sound, and this could mean it is “more tepid than we anticipated”.

Ms Tominey noted that Penguin Random House’s deal was for a tell-all piece and claimed that the book could “make for uncomfortable reading for the Royal Family”.

The Duke of Sussex’s book is due to be released in late 2022.

According to Noel, the reason the two brothers...

She jetted off on a holiday with husband...

The average cost of charging an electric car...

One eye-witness tweeted just after noon that police...
AMED POST

According to Noel, the reason the two brothers...

She jetted off on a holiday with husband...

The average cost of charging an electric car...