The mother of a teenager who died after falling from a railway bridge has blamed TikTok for her son’s death.

Ellis Murphy-Richards, 15, died in West Minster, Sheppey in Kent, just a week before his 16th birthday.

His mother Natasha Murphy, 33, asked coroner Sonia Hayes at Maidstone’s Archbishop Palace if TikTok could be made an interested party in the case because she thought harmful content her son viewed on the video-sharing app had caused suicidal thoughts.

An interested person – or party in this case – is someone who has the right to participate in proceedings because of their relationship to the deceased, their involvement in the circumstances of their death or at the discretion of the coroner. 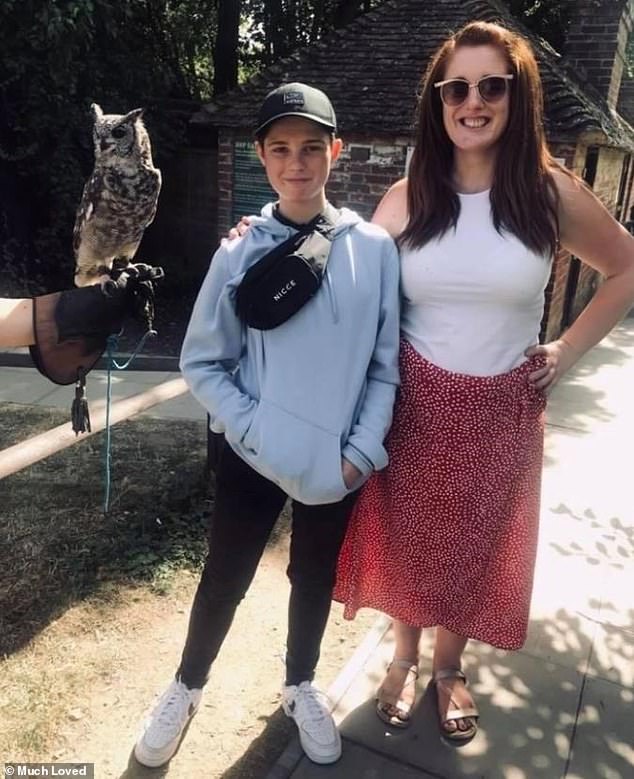 Ellis Murphy-Richards (left), 15, died in West Minster, Sheppey in Kent, just a week before his 16th birthday. His mother Natasha Murphy (right), 33, asked coroner Sonia Hayes at Maidstone’s Archbishop Palace if TikTok could be made an interested party in the case

At 4.30pm on September 30 last year, Ellis fell from Sheppey railway bridge as a train passed carrying schoolchildren from Sittingbourne, Kent, back to Sheerness.

Power to the track had to be cut for emergency services and passengers were kept onboard for two hours until the train could be moved.

A pre-inquest review heard how Ellis, who was a former pupil at Highsted Grammar in Sittingbourne and Oasis Academy on Sheppey, had been involved in a disagreement with staff at a pre-booked session with the Children and Adolescent Mental Health Service (CAMHS) at Seahells in Sheerness about going to A&E.

The teenager walked out of the session after refusing to go to hospital and headed to the railway tracks. The night before his grandmother had found him in distress.

Ms Hayes declined the request to make TikTok an interested party for the full inquest after Ellis’ mother blamed its ‘algorithm and content’ for her son’s death. 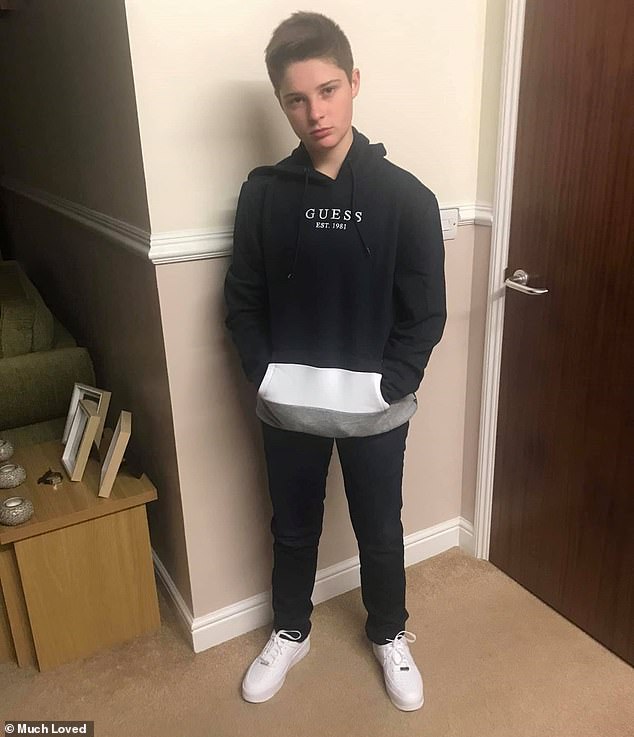 At 4.30pm on September 30 last year, Ellis fell from Sheppey railway bridge as a train passed carrying schoolchildren from Sittingbourne, Kent, back to Sheerness

Speaking after the hearing she revealed she had been given permission by Swale council to fix a plaque in Ellis’s memory to the bridge.

She added: ‘I have also asked Network Rail for a cage above the bridge for safety of others.’

The pre-inquest review heard how Ellis, who was living with his grandmother in Faversham at the time, had a history of mental health problems.

Following his death, the teenager’s mum paid tribute to her son. She said: ‘We are all devastated. Ellis was very articulate and musical. He had learned to play the nose-flute, had taken violin lessons and had his own guitar. He had learned British Sign Language so he could sign along to pop songs.’

Ms Murphy also revealed a mystery person tried to talk her son down from the bridge before he died and thanked them for their efforts. 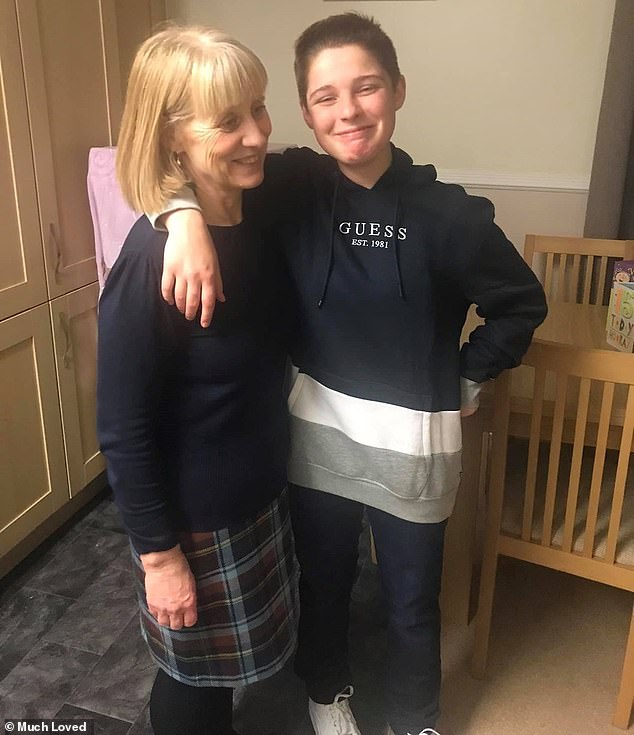 The pre-inquest review heard how Ellis, who was living with his grandmother (pictured) in Faversham at the time, had a history of mental health problems

Flowers and a 16th birthday balloon were left at the footbridge alongside a penned tribute from his mother, which said: ‘I know how much you wanted to celebrate this birthday.

‘Not how it was supposed to be. Maybe I didn’t say it enough but I was always proud of you. I just wanted you to be happy. Whichever path you took I would always have been there for you.’

His heartbroken grandparents wrote: ‘Cannot believe we will never again see your handsome face and hear your beautiful laughter.

‘Never again can we hold you close or see your smile. Our hearts are forever broken but no longer will you feel pain. Soar high with the angels.’

Ria Messenger, a support worker at the Faversham Youth Centre where Ellis was a member, said: ‘He was funny, danced quite a lot and sang very well. He was active on TikTok and liked to tell everybody. 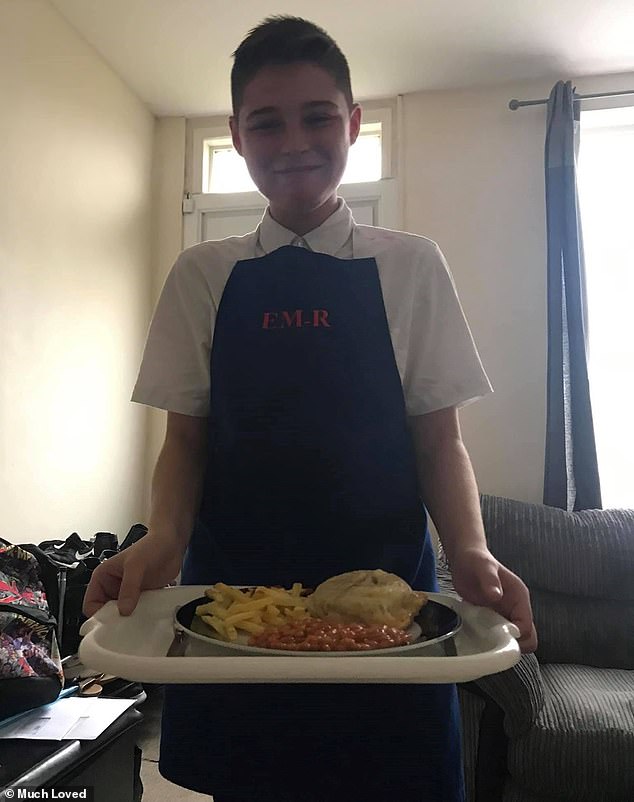 His heartbroken grandparents wrote: ‘Cannot believe we will never again see your handsome face and hear your beautiful laughter’

‘He had a good group of friends who always looked out for him. Everyone was absolutely devastated – it came out of nowhere. We wish that we could have done more to support him but with mental health it’s such a difficult subject.’

A spokesman for TikTok added: ‘We are deeply saddened to learn of this tragedy and our sympathies go out to Ellis’ family.

‘If anyone in our community is struggling with thoughts of suicide or concerned about someone who is, we encourage them to seek support.

‘We do this by providing access to helplines directly in-app and on our Safety Centre and re-direct searches for potentially harmful content of this nature to the relevant support resources, including the Samaritans in the UK.’

For confidential support call the Samaritans on 116123 or visit a local Samaritans branch, see www.samaritans.org for details

Dancing On Ice: Colin Jackson chose not to have same-sex partner