Up until this month, OneWeb had been launching the satellites that are building up its low-Earth-orbiting (LEO) communications “mega-constellation” on Roscosmos’ Soyuz rockets. However, in retaliation to sanctions imposed on Russia following its invasion of Ukraine, Mr Rogozin refused to green light the launch from Kazakhstan planned for March 5 until various demands were met. These included that the Government — OneWeb’s primary stakeholder — divest its stake in the firm, and that OneWeb provides assurances that the satellite constellation would not be used for military purposes.

Yesterday, OneWeb announced that it had entered into an alternative agreement, in which launch capacities would be provided by SpaceX.

The first launch under the newly forged partnership is expected to take place later this year — and will likely see another batch of 36 satellites transported up into orbit, replacing the deployment that had been planned for earlier this month.

To date, OneWeb has successfully placed 428 of its high-speed internet providing satellites into orbit, a number that represents 66 percent of its total planned fleet.

OneWeb CEO Neil Masterson said: “We thank SpaceX for their support, which reflects our shared vision for the boundless potential of space.

“With these launch plans in place, we’re on track to finish building out our full fleet of satellites and deliver robust, fast, secure connectivity around the globe.” 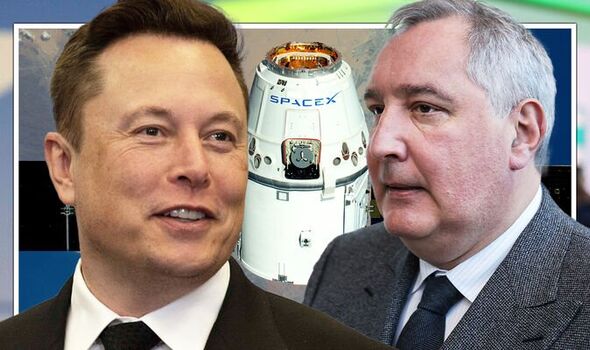 Mr Rogozin’s latest comments were made in response to a retweet of OneWeb’s partnership announcement by laser engraving specialist and self-proclaimed space exploration enthusiast, Katya Pavlushchenko.

Ms Pavlushchenko had said: “This is what I call a real cooperation and support in space! Congratulations to both @OneWeb and @SpaceX!”

In Russian, Mr Rogozin responded: “This is bull****. [SpaceX] isn’t capable of doing what our [rocket] did (sic). OneWeb is doomed, regardless of your frantic applauding of this deal.

“What are you happy about? The story that the snake and the chicken are lucky to have met on a narrow path? That’s demagoguery.

“I’m sad about OneWeb, but it’s their own fault.”

In a separate, but conceptually linked tweet, Mr Rogozin responded directly to the original OneWeb post with a cryptic and context-free picture of a snake eating a small rodent, with the quip: “Bon Appetit!”

Mr Rogozin tweeted at OneWeb with a cryptic picture of a snake eating a small rodent (Image: Twitter /@Rogozin)

Yesterday, OneWeb announced it had arranged for its launches via SpaceX (Image: Express.co.uk)

Ms Pavlushchenko, for one, seemed nonplussed by Mr Rogozin’s outburst.

She replied: “Well, if you are so sure of the failure of this cooperation, Dmitry Olegovich, then you should not worry. Let’s look at the first launch, [which] they promise this year.

“But I think @elonmusk would not sign a contract without the possibility of its technical implementation.”

The exchange attracted comments debating whether — amid the present political climate in Russia, which has seen state censorship reach new heights — it was prudent for a Moscow resident to publicly disagree with an official like Mr Rogozin.

Twitter user @roman150200 said: “I would now be more careful to answer directly to high-ranking people in the Russian Federation, just in case.”

“Please take them into consideration before you drive him into an early grave with an aneurysm. That would be such a tragedy.”

Mr Rogozin, who is also the former Russian Deputy Prime Minister for the for Defence and Space Industry, is no stranger to — as his NASA counterpart Bill Nelson once put it to AP News — “spout[ing] off every now and then”.

In late February, the Roscosmos Director-General made threats on Twitter to the effect that Russia might respond to international sanctions by de-orbiting the International Space Station on countries including China, Europe, India and the US.

Two days later, Mr Rogozin published a video in which he proposed leaving US astronaut Mark Vande Hei stranded on the International Space Station, alongside detaching the Russian modules from the rest of the orbiting laboratory complex.

And earlier this month, he tweeted a video showing Russian workers removing the Japanese, UK and flags from the casing of a Soyuz rocket.

Mr Rogozin wrote: “The launchers at Baikonur decided that without the flags of some countries, our rocket would look more beautiful.”

Previous articleWho could replace Vladimir Putin? The four potential successors to Russian president
Next article'Partygate' probe: Boris 'sure he will not face fines' as key witnesses interviews start

Speaking after a meeting with Mr Johnson at...

WASHINGTON – The Supreme Court on Monday sided with Texas...

Katharine Birbalsingh, who is the founder and head...

NBC is adding a "Quantum Leap" remake and...
AMED POST

Speaking after a meeting with Mr Johnson at...

WASHINGTON – The Supreme Court on Monday sided with Texas...

Katharine Birbalsingh, who is the founder and head...