Buckingham Palace confirmed today a service will be held on Monday to mark Garter Day, for the first time since 2019. And Prince Andrew may step out to join other fellow Knights of the Order of the Garter.

A newly-released statement by Buckingham Palace read: “A Service for the Most Noble Order of the Garter will be held in St George’s Chapel, Windsor Castle, on Monday 13th June 2022.

“Members of the Royal Family will walk in procession to the Chapel, and after the Service, will depart by carriage for their return journey to the Castle.

“During the Service, The Duchess of Cornwall will be installed as a Royal Lady of the Order of the Garter.

“A Lady Companion, the Baroness Amos, and a Knight Companion, Sir Anthony Blair, will also be installed.” 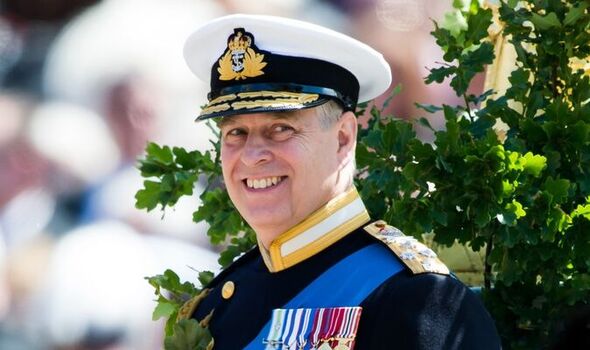 Prince Andrew has been tipped to attend Garter Day on Monday (Image: GETTY)

The statement does not mention whether Prince Andrew will be in attendance.

However, his presence has been widely reported as possible by commentators over the past few weeks.

Sharing the Palace statement on Twitter, royal author Omid Scobie included the Duke of York among the Garter Day’s attendees, noting he still is one of the Order’s Knights.

“Members of the Royal Family—including Prince Andrew, who remains a Knight of the Order of the Garter—will walk in the procession to a service at St George’s Chapel before returning to the castle by carriages.”

And a source close to Andrew told Newsweek: “The Duke is still planning to attend Garter Day.”

This comes after the Duke was forced to pull out of the Platinum Jubilee celebrations after testing positive for COVID-19.

The second son of the Queen is believed to be now fully healed, as he was spotted on Thursday driving in Windsor.

Prince Andrew last attended a public event in March, when he headed to Westminster Abbey for the service of thanksgiving for the life of Prince Philip.

While his attendance was expected as one of the Duke of Edinburgh’s children, the Duke partially overshadowed the poignant ceremony as he took the prominent role of accompanying the Queen from Windsor to London and walked beside her through the abbey’s nave.

The Duke stepped back from public duties in mid-November 2019, after his disastrous interview with Newsnight’s Emily Maitlis entirely focused on his association with convicted sex offender Jeffrey Epstein.

In January, one day after New York judge Lewis A. Kaplan denied a request by the Duke’s lawyers to throw out the civil lawsuit launched in August 2021 against Andrew by Virginia Giuffre, he returned his military and royal patronages to the Queen and Buckingham Palace announced he would continue not to carry out royal duties.

The Duke, who repeatedly and vehemently denied any wrongdoing, reached an out-of-court settlement with Ms Giuffre a few weeks later – a move which did not consist in an admission of liability.

In its latest statement regarding Garter Day, Buckingham Palace also did not mention whether the Queen would be in attendance.

Andrew and the sovereign are among the 10 royal Knights and Ladies of the Garter, titles members of the Firm can be bestowed upon directly by the monarch with no interference from the Government.

Camilla, Duchess of Cornwall, is the latest royal to have been included in this Order, created by King Edward III nearly 700 years ago.

This chivalry order can count a total number of 24 Ladies and Knights among its non-royal members, while the monarch can appoint an unlimited number of members of the Firm and foreign sovereigns.

All the children of the Queen have been included in this order, as well as Prince William and three close cousins of the Queen – Princess Alexandra, the Duke of Kent and the Duke of Gloucester.

Garter Day normally pans out in different stages, and starts at Windsor Castle with the official appointment of new members.

Following a lunch, the Knights and Ladies head to the nearby St George’s Chapel wearing the traditional Garter robes to attend the service, before travelling back to the castle via carriage.

Previous articleDay after fatal Osprey crash, Navy helicopter goes down in California; no deaths reported
Next articlePolice, firefighters die by suicide more often than in line of duty. Why rates remain high