Since the Russian leader’s brutal invasion of Ukraine last month, a number of senior political figures have speculated whether Putin may be suffering from psychological or physical health problems. Earlier this month, White House Press Secretary Jen Paski questioned the Russian President’s state of mind in a press conference. Ms Paski said: “He’s obviously been quite isolated during Covid. But I will tell you certainly the rhetoric, the actions, the justification that he’s made for his actions are certainly deeply concerning to us.”

He added: “I wish I could share more, but for now I can say it’s pretty obvious to many that something is off with Putin.

“He’s always been a killer, but his problem now is different and significant. It would be a mistake to assume this Putin would react the same way he would have five years ago.”

Claims that Putin may be suffering from physical problems have also circulated in the past month among several people who allegedly have sources close to the Kremlin. 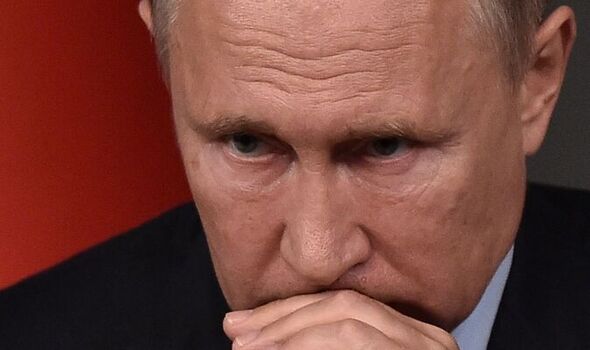 Putin could be “clearing his conscience” after a cancer diagnosis (Image: Getty)

Senior figures from Five Eyes intelligence alliance claim Putin’s “Increasingly erratic behaviour” and bloated face suggest the President may be suffering from the side effects of medical treatment.

Allegations that Putin may be suffering from poor health have persisted for the past decade of Putin’s presidency.

Mr Black, who is a former British army veteran reporting on terrorism and intelligence, noted in 2014 that recurring claims surrounding Putin’s health “are back again with a vengeance”.

Writing for The Week, Mr Black claimed that Putin’s pardon and release of Mikhail Khodorkovsky after 10 years in prison for fraud, was a sign that Putin may not be in the best of health.

Putin has been widely condemned for his invasion of Ukraine (Image: Getty)

Mr Black said: “Some have suggested [Putin] is clearing his conscience.”

Later that year after Putin illegally annexed Crimea, an article citing a number of “sources” close to the President, including an unnamed German doctor, claimed he was suffering from terminal cancer.

Journalist Richard Johnson wrote in the New York Post: “Putin was allegedly being treated by a doctor from the old East Germany.

“The doctor had been trying various treatments, including steroid shots, which would explain Putin’s puffy appearance.

Putin has made veiled threats of nuclear aggression (Image: Getty)

“But I’m told the physician quit recently, confiding that he was mistreated by Putin’s security detail.”

The Kremlin furiously denied allegations that Putin had pancreatic cancer, and said that those reporting on Putin’s poor health should “bite their tongue”.

In response to questions about Putin’s cancer, spokesperson Dmitry Pskov also told journalists that they “shouldn’t bank on it”.

The spokesperson added, less aggressively, that “everything’s fine” according to RIA Novosti.

Further allegations that Putin was suffering from cancer came from Valery Solovei, who is a prominent critic of the President, in 2020.

Mr Solovoi claimed his sources “at the epicentre of decision making” told him that Putin had an operation in February 2020 for a cancer diagnosis, while the President was also suffering from Parkinson’s.

According to Mail Online, Mr Solovoi alleged: “One is of a psycho neurological nature, the other is a cancer problem.

“If anyone is interested in the exact diagnosis, I’m not a doctor and I have no ethical right to reveal these problems.

“The second diagnosis is a lot, lot more dangerous than the first name diagnosis as Parkinson’s does not threaten physical state but just limits public appearances.

“Based on this information people will make conclusions about his life horizon, which wouldn’t even require specialist medical education.”

At the time the Kremlin responded by firmly and categorically denying that there was anything wrong with Putin’s health.

Despite the Palace saying that "the Queen has...

Russian forces are thought to be looking to...

The Northern Ireland Minister said the key to...

The PGA Championship concludes on Sunday with Chile's...
AMED POST

Despite the Palace saying that "the Queen has...

Russian forces are thought to be looking to...

The Northern Ireland Minister said the key to...