Vladimir Putin describes the assassination attempts against him

The senior military commander becomes the 15th top brass Russian military official to lose his life in the invasion of Ukraine. With the war now entering its fifth week, Russia has suffered multiple losses of personnel, equipment, aircraft and senior officers. The loss of so many commanding army personnel is the worse Russian loss of such ranking leaders since World War II.

The latest officer to be eliminated in the fighting is reported to be Colonel Alexei Sharov, who was killed in the ongoing assault on Mariupol.

Colonel Sharov was commander of the 810th Guards Separate Order of the Zhukov Brigade, an elite branch of the Russian marines based in Sevastopol in Crimea.

The senior officer is the fifth Russian Colonel to die since the invasion, which has also seen five Generals also killed.

Multiple other Captains and Majors have also lost their lives as vicious attacks on Ukrainian cities by Russian troops are met with brave and bold defences by Ukrainian forces.

Figures of exactly how many Russian soldiers have died since the start of the war remain unclear, with the Kremlin remaining particularly tight-lipped. 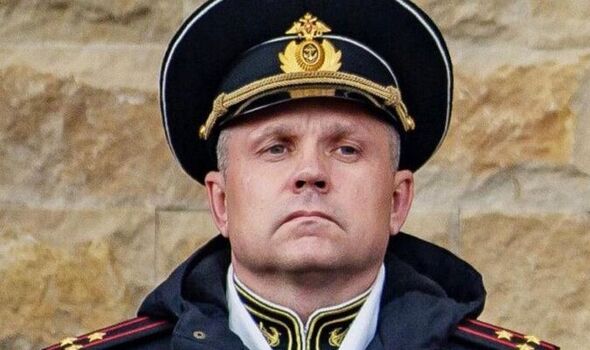 Colonel Sharov is the latest senior Russian officer to die in the war (Image: CHP – Reuters)

Putin has lost at least 5 Generals and 5 Colonels since the start of the war (Image: Getty)

Earlier this month, the Russian defence ministry admitted 498 Russian soldiers had been killed in action and 1,500 wounded, a large number after just 10 days of fighting that pointed to the danger of its attempts to take Kyiv in a lightning raid.

Critics said the official government numbers should be treated with scepticism. And US and Ukrainian officials have since claimed Russia has suffered 10, 20 or 30 times as many casualties, claiming Russian losses could rival the wars in Chechnya or Afghanistan.

“We don’t know exactly how many people have died at this given moment.”

Russian news outlets continuing to operate inside the country have largely stopped reporting on the death toll from the war.

READ MORE:
Could Putin be assassinated? Internal plot for a coup uncovered

It is not known exactly how many Russians have died in the war (Image: Getty)

Many Russian soldiers have been captured alive (Image: Getty)

However, one Russian outlet has reported some figures.

Russian tabloid Komsomolskaya Pravda, which frequently posts pro-Kremlin news reports, said: “According to Russian defence ministry data, 9,861 Russian soldiers had been killed in action and another 16,153 had been wounded.”

The paper later claimed its site had been hacked.

It said: “Access to the administrative interface was hacked on the Komsomolskaya Pravda website and a fake was made in this publication about the situation around the special operation in Ukraine.

“The false information was immediately deleted.”

No other Russian news agencies reported the remarks, and it was not clear why Komsomolskaya Pravda alone would have access to such information.

Many of those fighting in Ukraine are said to be Russian conscripts.

Aside from those killed, Ukrainian forces have captured many soldiers alive.

With morale running low, equipment running out of fuel, and no apparent direction in leadership, Russian soldiers have been filmed appearing lost in the objectives of their mission.

Scenes have emerged from Ukraine of Russian soldiers in tears as they phone home to talk to loved ones.

Is Putin starting to feel defeat in Ukraine? Will the death of senior officers lead to junior soldiers giving up? How will Russian citizens feel towards Putin as the war continues? Let us know what you think by CLICKING HERE and joining the debate in our comments section below – Every Voice Matters!

Ukraine has also lost many soldiers in the war (Image: Getty)

Aside from the deaths of Russian soldiers, the UN human rights office says at least 847 civilians have been killed and 1,399 wounded in Ukraine.

Ten million people have now fled their homes in Ukraine because of the Russian invasion, according to the United Nations High Commissioner for Refugees.

Apart from the 3.5 million who have left for neighbouring countries, another estimated 6.5 million people are thought to be displaced inside the war-torn country itself, with many heading West to cities such as Lviv.

Previous articleThe Discover Samsung sales event has deals on top-rated TVs, smartphones and soundbars
Next articleAutomakers struggle to hire, keep workers — with some quitting by lunch

Extremist groups in Russia have expressed a range...

Extremist groups in Russia have expressed a range...