Putin ‘needs to bring something back’ from Ukraine

On day 21 of a war that has killed thousands of people and displaced millions of Ukrainians, the Russian president said the Kremlin’s invasion, which he calls a special military operation, is “going to plan” – while accusing Western nations of intending to “damage the entire Russian economy”.

Speaking of the harm Western sanctions are doing in his country, Putin said in a televised speech to government ministers on Wednesday: “Behind the hypocritical talk and today’s actions of the so-called collective West are hostile geopolitical goals.

“They just don’t want a strong and sovereign Russia.”

Of the sanctions, the dictator said: “But this economic blitzkrieg against Russia has failed.”

He went as far as to call the whole conflict, which has according to UN figures already killed 691 Ukrainian civilians and wounded another 1,143, a pretext for the West to impose sanctions.

In line with his repeated description of Ukraine’s democratically elected leaders as neo-Nazis fixated on committing genocide against Russian-speakers in the east of the country, he added: “In the foreseeable future, it was possible that the pro-Nazi regime in Kyiv could have got its hands on weapons of mass destruction, and its target, of course, would have been Russia.” 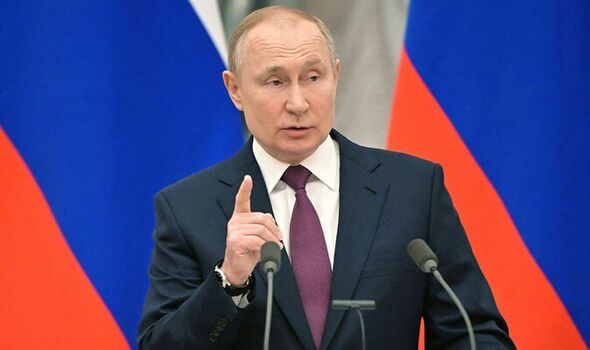 The West, which Putin said wants to turn Russia into a “weak dependent country”, denounces this line as baseless war propaganda.

NATO and the plan of its ally, the dictator stressed, is to “violate its territorial integrity; to dismember Russia in a way that suits them”.

He said: “The West doesn’t even bother to hide that their aim is to damage the entire Russian economy, every Russian.”

But “they don’t know our history or our people”, Putin warned as his attacks in Eastern Europe enter the third week.

Touching upon Russia’s and Ukraine’s talks to end the war, he said: “The question of principle for our country and its future — the neutral status of Ukraine, its demilitarisation, and its denazification — we were ready and we are ready to discuss as part of negotiations.”

Commitments from Kyiv to become a “neutral” country would allow Ukraine to keep a standing army, but prevent it from ever joining NATO or hosting foreign military bases.

The cost of the war: Millions of Ukrainians have already been displaced (Image: Daily Express)

A similar pledge convinced the Soviet Union to end the decade-long occupation of Austria after World War Two in 1955.

Austria declared itself permanently neutral that year, which led to the Soviet Union agreeing to an end to its occupation.

Sergei Lavrov, the Russian foreign minister, told RBC News on Wednesday: “The negotiations are not easy for obvious reasons. But nevertheless, there is some hope of reaching a compromise.

“There are absolutely specific wordings and in my view, the sides are close to agreeing on them.”

Zelensky films himself in Kyiv to prove he hasn’t surrendered

While expressing willingness to negotiate, Ukraine also emphasised they will not surrender or accept Russian ultimatums.

On Tuesday, Ukrainian President Volodymyr Zelensky, hinting at optimistic developments in Kyiv’s conversations with Moscow, said the Russians had “begun to understand they will not achieve anything by war”.

Showing an eagerness to compromise, Mr Zelensky added: “It is clear that Ukraine is not a member of NATO; we understand this.

“For years we heard about the apparently open door, but have already also heard that we will not enter there, and these are truths and must be acknowledged.”

Despite not being part of NATO, though, support from the Alliance continues – yet always with caution.

Despite saying they are not planning to send forces to Ukraine, after Poland called for the deployment of a peacekeeping mission, NATO Chief Jens Stoltenberg said military commanders had been tasked to come up with plans to bolster the Alliance’s eastern flank.

He told reporters: “On land, our new posture should include substantially more forces in the eastern part of the alliance, at higher readiness, with more pre-positioned equipment and supplies.

“We call on Russia, on President (Vladimir) Putin to withdraw its forces, but we have no plans of deploying Nato troops on the ground in Ukraine.”

He said: “The capital is the heart of Ukraine, and it will be defended.

“Kyiv, which is currently the symbol and the forward operating base of Europe’s freedom and security, will not be given up by us.”

One strike hit a 16-floor housing block, where fire raged and smoke swelled from the destroyed skeleton of the building.

If you haven't been to Switzerland yet, it's...

Tottenham target Alessandro Bastoni has made it very...

Putin, who has controlled Russia with a rod...

Emma Raducanu wants to add French to her...
AMED POST

If you haven't been to Switzerland yet, it's...

Tottenham target Alessandro Bastoni has made it very...

Putin, who has controlled Russia with a rod...