This morning, fighting reached the centre of the port city of Mariupol, yet the Ukrainian Deputy Prime Minister Olga Stefanishyna insisted there would be no “laying down of arms.” The city’s residents are desperately short of food, water and electricity and are facing relentless Russian attacks. Meanwhile, Ukrainian President Volodymyr Zelensky accused Russia of war crimes after an estimated 90 percent of Mariupolis buildings were destroyed or damaged by shelling.

Yet the city’s residents allegedly refused Moscow’s offer of “safe passage” out of the city after a 5am deadline had been set.

Despite incessant shelling over major Ukrainian cities since Russia launched its invasion last month, most Western leaders have been against imposing a no-fly zone.

Experts have claimed it may draw the West into a direct war with Russia that, given Putin’s posturing, could potentially become nuclear.

However, earlier this month, Scottish First Minister Nicola Sturgeon was the first UK leader to speak positively about the prospect of imposing a no-fly zone over Ukraine.

Read More: Boy, 14, arrested on suspicion of rape of a young girl 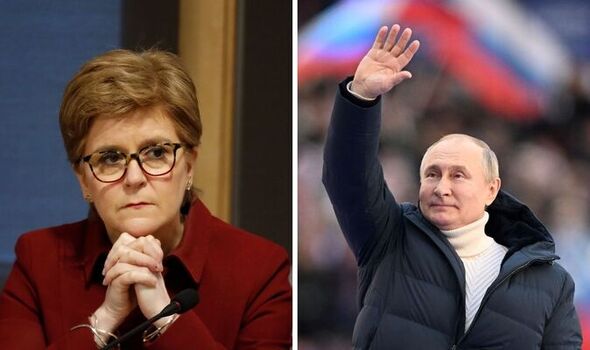 Mariupol are desperately short of food, water and electricity and are facing Russian attacks (Image: Getty)

While Ms Sturgeon stressed that it may lead to “direct military confrontation”, she argued that “the West has to keep its mind open to every way in which Ukraine can be helped.”

Meanwhile, the SNP leader has long campaigned for a second referendum on Scottish independence, something which expert Mr Ibrahim deemed would bring Scotland “closer to the Kremlin”.

Putin had attempted to antagonise and dismantle everything Western for years before his invasion of Ukraine, and Scottish independence was deemed by an expert as “the most immediate” way of doing so in the UK

Mr Ibrahim who is a Research Professor at the US Army College wrote in The Scotsman: “The United Kingdom is the historical progenitor of what we today call the Western world, and remains a key pillar of the Western alliance.

Sturgeon spoke positively about a no fly zone over Ukraine (Image: Getty)

“To dismantle it is a feverish wet dream for Putin and the deluded revanchist nationalists that surround him in the Kremlin.

“And the prospect of Scottish independence is the most immediate way in which this may come to pass.”

Mr Ibrahim said in the 2020 article: “Picture the scene: the first consequence of a plebiscite in favour of independence will be an unholy mess about the nuclear deterrent.

“The SNP have already made it clear that they would want Trident out of the Clyde as soon as possible, and the rest of the UK does not have any other location that is as strategically sound as the Clyde, plus moving the operations would take years ‒ time during which the nuclear deterrent would be semi-paralysed.”

Meanwhile, Scottish independence would also bring Scotland closer to “Russia’s sphere of influence” due to “friendship” that had been cultivated between the SNP and “Russian influence agents”, claimed the expert.

Mr Ibrahim added: “A newly independent Scotland governed by anyone other than the SNP would also struggle to resist Moscow if the latter continued to apply pressure on the British Isles, in the way they have been recently testing our national airspace and our territorial waters.

Scotland had a referendum on independence in 2014 (Image: Getty)

“Scotland would be much more vulnerable to the designs of the Kremlin and it would be very much at the forefront of the Kremlin’s attention, as one of the best vectors to further undermine other parts of the Western alliance, especially the remainder of the UK.

“Upon independence, Scotland would also find itself in immediate financial troubles: a problem that Uncle Vlad would no doubt be eager to help with.

“And particularly an SNP government would have aligned ‘messaging’ (read propaganda) needs to blame everything that goes wrong in Scotland during the transition period and for a while after on dark manoeuvres from Westminster.”

In the build up to the referendum on Scottish independence referendum in 2014, Putin was coy on whether he wanted Scotland to break away from the UK.

However, speaking on the BBC’s Andrew Marr Show, Putin said that everyone had a “right to self-determination”.

The Russian leader said: “It’s not a matter for Russia ‒ it’s a domestic issue for the United Kingdom.

“Any people have the right to self-determination and now in Europe the process of diluting sovereignty in the framework of a united Europe is more accepted.”

However, Putin added: “But I believe that one should not forget being part of a single, strong state has some advantages and one should not overlook this.

“But it’s a choice for each and every [person] according to their own circumstances.”

Previous articleWinners and losers of Falcons' trade of Matt Ryan to Colts
Next articleA Boeing 737-800 crashed in China with 132 passengers. Here's what we know about the aircraft and its safety.

Rent inflation at the highest level for 14 years, says Zoopla

The guest continued: "I'm very proud of him,...

The governor of the Bank of England has...

The guest continued: "I'm very proud of him,...

The governor of the Bank of England has...