The 2,000-year-old remains of a child from a well-to-do family and their pet dog were discovered by archaeologists in France.

The infant, estimated to be a year old, was found in Aulnat in the Auvergne region of central France by a team surveying for a planned airport expansion.

The remains date back to the first century AD, when France would have been under Roman rule.

They were accompanied by numerous objects — including clay jars, animal parts and a small toy — as well as a puppy wearing a decorative collar. 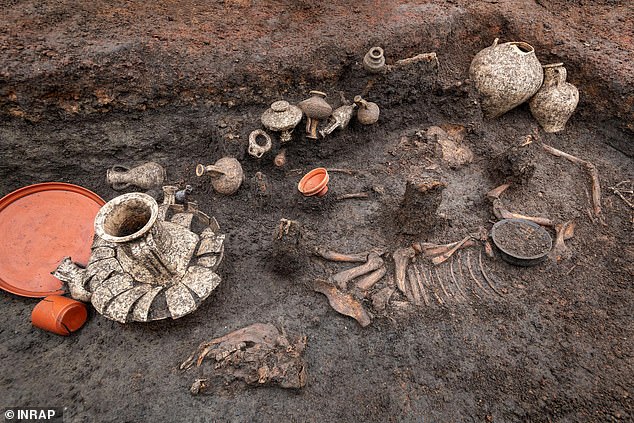 The 2,000-year-old remains of an infant, estimated to be about a year old, waere found in Aulnat in the Auvergne region of central France. The body was surrounded by a plethora of animal offerings and objects, suggesting they were of high social standing

‘Such a profusion of crockery and butchered items, as well as the personal effects that followed the child to his grave, underline the privileged rank to which his family belonged,’ according to the National Institute for Preventative Archaeological Research (INRAP).

This grave site was discovered in December as part of preventive excavations carried out by INRAP before construction at Clermont-Ferrand airport.

Evidence of a wooden coffin was uncovered in the grave, surrounded by animal sacrifices including half of a pig, different cuts of pork and two headless chickens.

Twenty terra cotta vases and assorted glass pots in the grave may have contained medicine, cosmetics, or the child’s portion of the funereal banquet, while researchers believe a foot-long iron hoop attached to a bent metal rod was a toy or part of a game. 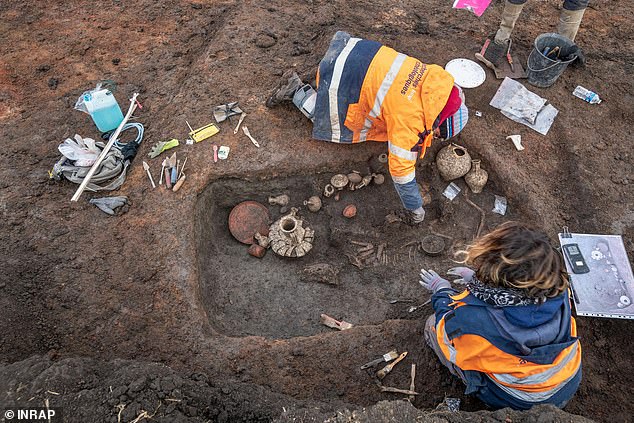 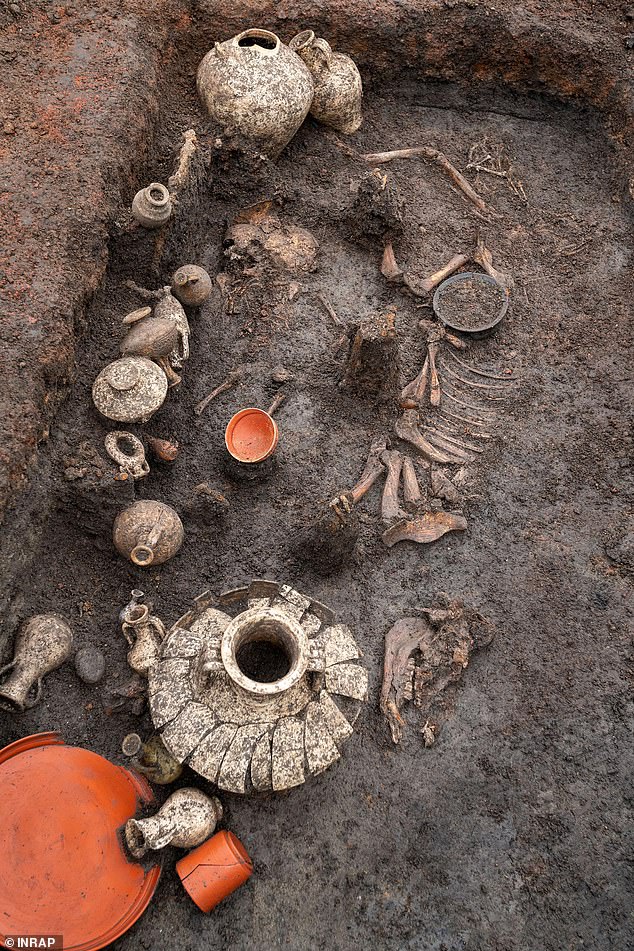 A half of a pig, various cuts of pork and two headless chickens were found buried with the body. The skeleton of a dog with a decorated collar was located at what would have been the foot of the child’s coffin

The skeleton of a puppy was found at what would have been the base of the coffin, wearing a collar with bronze decorations and a small bell. 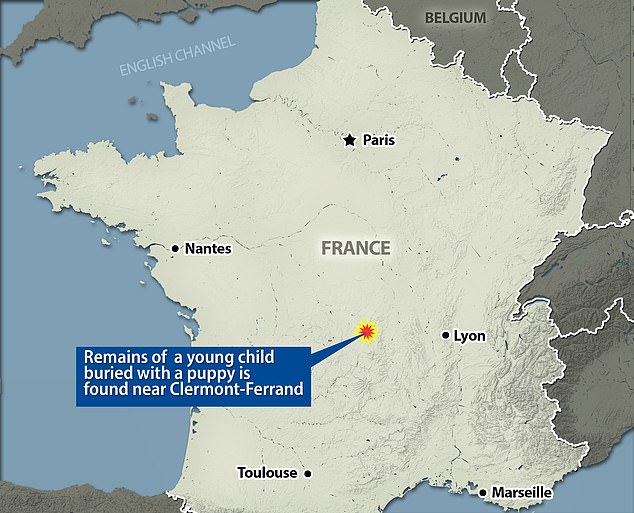 A map indicating where the remains were located.  Since November, archaeological surveys near Clermont-Ferrand airport have uncovered items from the Iron Age, High Middle Ages and other eras

‘A dog’s association with a young child is well documented in a funeral context, but here it is the collar and bell that are unusual,’ according to archaeologists.

They call the discovery ‘exceptional’ and believe it’s the oldest child’s burial site discovered in France.

In Roman-era Gaul — modern-day France, Belgium and parts of western Germany — adults would have been cremated, but children were often buried on family lands.

Head archaeologist Laurence Lautier said the sheer number of offerings buried with the child was unusual. 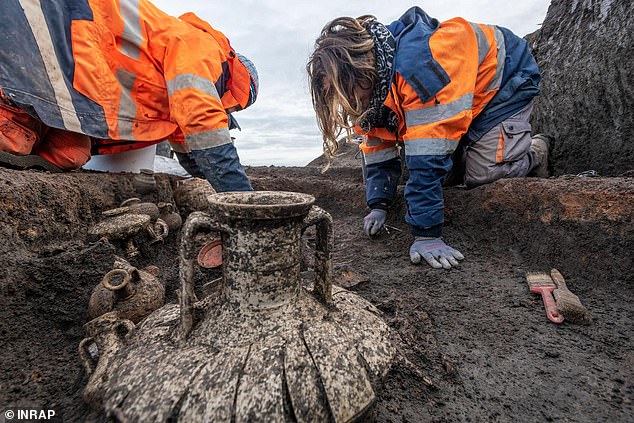 Some twenty terra cotta vases, as well as glass jars were found. It’s believed they contained cosmetics, medicine or the deceased’s portion of the funereal feast 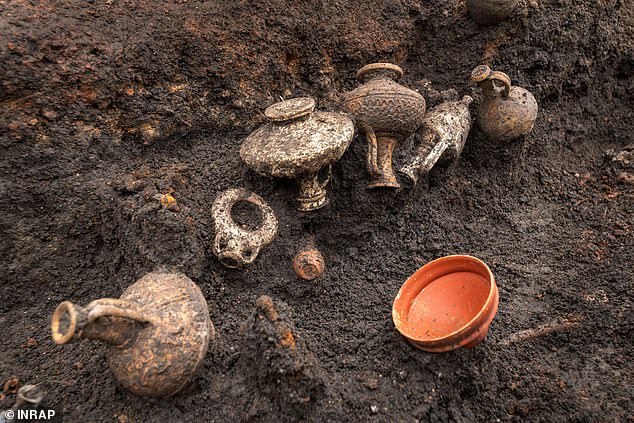 The child would have lived during the reigns of either Emperor Augustus (27 BC – 14 AD ) or Tiberius (14 -37 AD), just decades after the birth of Jesus 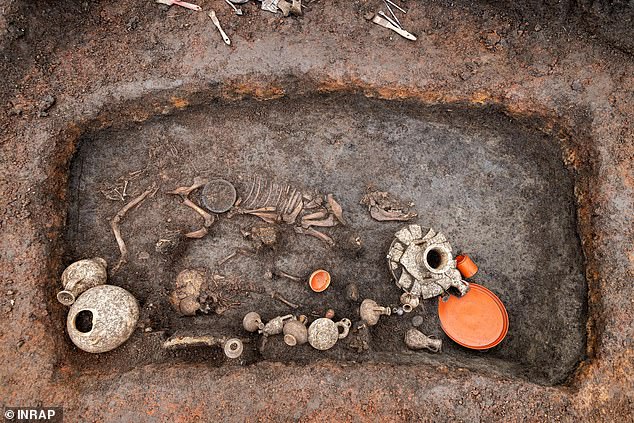 In Roman-era Gaul — modern-day France, Belgium and parts of western Germany — adults would have been cremated, but children were often buried on family estates

‘In this type of tomb we often find one or two pots placed at the foot,’ Lautier told AFP. ‘Here there are around 20 as well as many food offerings.’

That denotes a high social class, Lautier said, ‘ a family that was clearly very rich.’

Since November, surveys of the area have turned up items from the Iron Age, High Middle Ages and other eras.

The digs are expected to end next month.

Art: Painting of the Last Supper in a parish church in Herefordshire 'may be a lost work by Titian'