Ukrainian MP warns EU ‘will be next’ if Putin wins war

Ms Vedler was killed a month after predicting the Russian president’s bid to enhance Russia’s integrity would end badly in a social media post.

Ex-boyfriend Dmitry Korovin, also 23, has since confessed to strangling her to death after a row over money.

There is no suggestion her death is related to her views on Putin.

Korovin told his interrogators he slept in a hotel room for three nights with her lifeless body which he put into a suitcase. 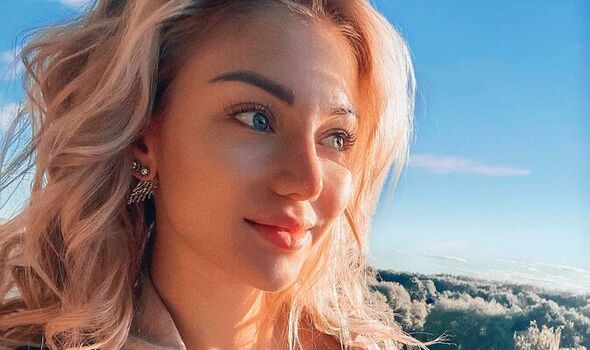 He then drove to the Lipetsk region of Russia, leaving it in the boot of a car for over a year.

In a bid to make her friends think she was still alive, Korovin posted photos and messages on the model’s social media.

Ukrainian blogger Evgeniy Foster, a friend of Ms Vedler’s based in Kharkiv, grew suspicious and prompted a pal in Moscow to file a missing person case.

A search was launched which led to the grim discovery of her body.

Firefighters at a shelled residential building in Kharkiv (Image: Getty)

A man stands in front of the crater caused by a Russian shell (Image: Getty)

In a video from Russia’s Investigative Committee shows Korovin allegedly demonstrating how he killed the model and making his confession.

In her posting about Putin, Ms Vedler said: “Given the fact that Putin went through a lot of humiliation in childhood, he could not stand up for himself due to his [slight] physical form, it is not surprising that he left after law school and joined the KGB.

“Such people are timid and fearful from childhood, afraid of noise and darkness, strangers, so traits such as caution, restraint, and lack of communication are developed early in their character.

“I can only assume, in my opinion, a clear psychopathy or sociopathy is seen in him.”

Who is Vladimir Putin? (Image: Express)

She told followers: “For psychopaths, it is important to constantly experience a sense of fullness and sharpness of life, so they love risk, intense experiences, intense communication, intense activity – an intense and dynamic life.

“Maybe he really wants to enhance the integrity of Russia and sincerely wishes the good for the Russians. But can he really do anything?”

Her comment that Putin’s bid to enhance Russia’s integrity are poignant given the invasion of Ukraine which is now in its third week.

A trauma expert told Express.co.uk earlier this month that the Russian leader has gone from being a “miracle child” to a malignant narcissist hellbent on getting his own way.

Firefighters extinguish a fire in a 16-storey residential building in Kyiv (Image: Getty)

Caroline Strawson, a trauma-informed therapist, said Putin has “psychopathic traits”, adding that not only does he have a complete lack of empathy, but also a cruel streak with no emotion or remorse.

She said: “His government feeds into his attachment wounds by treating him like the golden child and the entitled man, giving him supply with power and ruling by fear.

“Just like a bully, his government feels safer feeding the bully than standing up to him.”

There have been at least 1,663 civilian casualties since the war started on February 24 although the true statistic may be far higher.

The UN’s refugee agency believes more than 2.8 million people have left Ukraine in search of safety.

An anti-war protester interrupted a live news bulletin on Russia’s state TV Channel One on Monday, holding up a sign behind a presenter and shouting slogans denouncing the war.

The sign, in English and Russian, read: “NO WAR. Stop the war. Don’t believe propaganda. They are lying to you here.”

The protester could be seen and heard for several seconds before the channel switched to a different report to get her off the screen.

Previous article‘I never said anything bad’ Lorraine Kelly red-faced as Mr Motivator demands apology
Next articleRoyal POLL: Do YOU think it's time for Queen to step back and rest?

Jadeveon Clowney is back right where the Browns...
AMED POST