Russia-Ukraine: Haunting chemical weapons that were used in Syria could come to Europe


Ukraine: Polish president on the possibility of chemical weapons

Fighting in the twentieth day of Russia’s invasion of Ukraine is thought to be moving increasingly close to Kyiv, the country’s capital. Many of the city’s citizens are well-armed and have been preparing for the past three weeks to face the Russian military. Guns have been distributed to residents, and make-shift workshops on how to make things like Molotov cocktails and how to shoot a gun have sprouted up across the locality.

Kyiv’s mayor Vitali Klitschko has imposed a 35-hour curfew after several residential blocks were attacked by Russian forces just outside the city.

Russia has so far failed in its effort to sweep the country with its military, something experts claim President Vladimir Putin expected to be over and done with in days.

Many now fear that he could resort to using desperate means to secure Kyiv, deploying tactics seen in conflicts like the Chechen and Syrian wars.

Syria in particular has roused the attention of the international community given Moscow’s alleged use of chemical weapons against civilians and anti-government fighters. 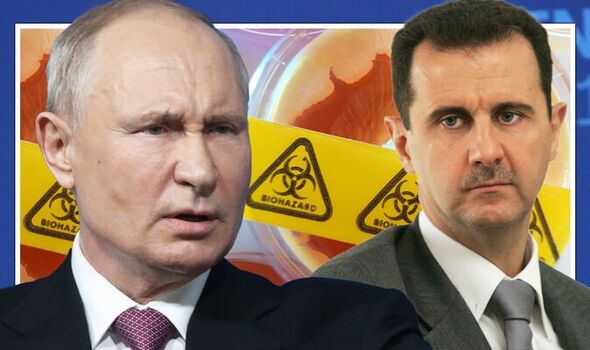 Russia-Ukraine: Many fear that Russia could use chemical weapons in its efforts against Ukraine (Image: GETTY)

There is no evidence that Russia used these weapons while helping its ally defeat rebels in Syria.

However, it provided huge military support for the regime of Bashar al-Assad who allegedly carried out dozens of chemical attacks on his own people.

Various accounts and expert opinions claim that Russia did act in chemical warfare in Syria — something which it continues to deny.

There are many different categories of chemical weapons: choking agents like phosgene gas attack the lungs and respiratory system; blister agents, like mustard gas, burn the skin and blinds people.

The most lethal category of chemical weapons are nerve agents.

These interfere with the brain’s messages to the body’s muscles.

Even a tiny drop of these can be fatal.

The Novichok nerve agent, which entered public consciousness after the Salisbury attack, is a good example of how deadly they can be: less than 0.5mg of Novichok is enough to kill an adult.

Syria: The use of chemical weapons during the Syrian war was widespread (Image: GETTY)

What chemical weapons were used in Syria?

The use of chemical weapons in Syria was widespread, with at least 106 attacks having taken place in Syria since September 2013, when President Assad signed the international Chemical Weapons Convention (CWC) and agreed to destroy the country’s chemical weapons stockpile.

Syria ratified the CWC a month after a chemical weapons attack on several suburbs of the capital, Damascus.

These involved the nerve agent Sarin and left hundreds of people dead.

Western governments directly accused the Assad regime of using such weapons, saying that it was only possible for the Syrian government to carry out those attacks.

The most common agent used was chlorine.

One study suggested it was present in 91.5 percent of attacks.

Sarin, as mentioned, was also used, as well as sulphur mustard, which caused blistering of the skin and mucous membranes on contact.

Almost half of the attacks between 2014 and 2018 were delivered via aircraft, according to the BBC.

Less than a quarter were delivered from the ground.

The remaining attacks had an undetermined method of delivery.

Bunker: A satellite image of the a chemical weapons bunker in Homs, Syria, after being destroyed (Image: GETTY)

Bashar al-Assad: The Syrian president and Putin worked together during the civil war (Image: GETTY)

Why are chemical weapons relevant to the conflict in Ukraine?

Last week, Russia called a special emergency meeting of the UN Security Council to discuss its claims that Ukraine is planning to develop biological weapons.

Ukraine dismissed this, as well as the US, both labelling Russia’s allegations a “false flag” — a claim to justify Russia’s possible use of chemical weapons itself.

It is true that Ukraine does have laboratories on its soil.

But the government says these are bases where scientists have worked on things like protecting the population from diseases such as COVID-19.

Because Ukraine is now engaged in war, the World Health Organisation (WHO) has asked the country to destroy any dangerous pathogens in its laboratories.

All chemical weapons are strictly prohibited by the Chemical Weapons Convention of 1997, signed by a vast majority of countries, including Russia.

Vladimir Putin: He has been involved in several wars during his time in the Kremlin (Image: Express Newspapers)

While Moscow’s collusion with Assad in Syria was seen as nearing the red line, a lack of concrete evidence of direct Russian involvement led the international community to fall short of taking unilateral action against Putin.

The line was viewed as being crossed in March 2018, when a former KGB officer and defector, Sergei Skripal, was poisoned along with his daughter by the nerve agent Novichok.

Russia denied responsibility and came up with over 20 different explanations for who could have done it.

But investigators concluded through evidence collected that it was the work of two officers from Russia’s GRU military intelligence and, as a result, 128 Russian spies and diplomats were expelled from several countries.

Alexei Navalny: The Russian opposition leader has been detained since January 2021 (Image: GETTY)

It has been suggested that if Russia was to use chemical weapons in its war against Ukraine, this would be viewed as majorly crossing the red line and would likely prompt calls for the West to become directly involved in the conflict.

Frank Gardner, the BBC’s security correspondent, noted in an analysis piece: “The fact is that if you have a protracted war where the attacking military are trying to break the will of defending forces then chemical weapons are, unfortunately, one very effective way to achieve that. It’s what Syria did in Aleppo.”

Speaking about her fortune, Sara said she told...

The Duchess of Sussex took the centre stage...
AMED POST

Speaking about her fortune, Sara said she told...