By Craig Hope for the Daily Mail

When Southampton won the reverse fixture in November, they moved to the top of the Premier League.

Ralph Hasenhuttl was spoken of as a top-six manager-in-waiting in the days that followed. Saints were at the summit just over a year on from their 9-0 home defeat by Leicester. It was, we said, reward for the faith maintained in their innovative Austrian boss.

So does the subsequent slide to 12th, including another 9-0 humiliation at Manchester United last week, render November’s eulogy misplaced? 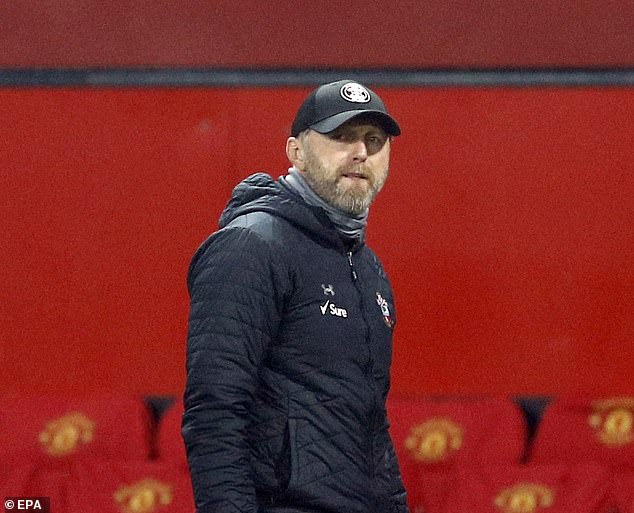 Absolutely not. It should be a reminder of the job Hasenhuttl did in taking a middling Premier League squad from their lowest ebb to the top of the table.

At St James’ Park their frailties were exposed, and not always by the opposition. This defeat, a fifth on the spin, was self-inflicted, a performance stained by individual errors.

The processes installed by Hasenhuttl were still evident elsewhere and Southampton played relatively well during a first half that somehow ended 3-1 in Newcastle’s favour. Visiting mistakes had contributed to all three goals and Saints centre back Jan Bednarek was just as harmful to his side’s health as any home attacker.

James Ward-Prowse’s fine free-kick made it 3-2 early in the second half but the game changed within 60 seconds when Newcastle’s Jeff Hendrick was sent off. At 11 v 11, a 5-5 draw looked as likely an outcome as any. But down to 10 men the hosts defended better than they had done previously, as if united by a clear purpose. 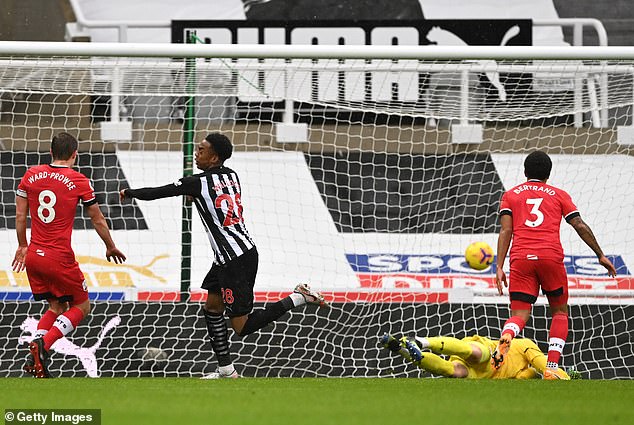 Newcastle took the lead through debutant Joe Willock (middle), on loan from Arsenal

The red card, if anything, helped Newcastle, as a basketball match made way for a tug of war, and Southampton just weren’t up for the fight.

Even when injury reduced Newcastle to nine men for the final 15 minutes — with defender Fabian Schar forced off and set for several months out with a knee injury — it only heightened Southampton’s panic. Hasenhuttl has to find the reset button. Only one month ago they beat champions Liverpool with a display that captured everything about the work the manager has done with a squad who rank as decent enough, no better.

And the evidence of last season, as well as the first half of this, suggests Hasenhuttl will turn it around. Tellingly, the club’s supporters have barely uttered a word in dissent.

Compare that to the unrest on Tyneside. Even in victory — a second in three matches — fans want Steve Bruce gone.

For while Southampton have been an example of a manager implementing style and identity, Newcastle have drifted aimlessly under Bruce. A return of six points from nine in a week has eased relegations fears, but it should not distract from the fact that their squad has hopelessly underperformed.

Newcastle will win games because they have good players — two-goal Miguel Almiron, Callum Wilson and Allan Saint-Maximin should be starring in a top-half side. There has been a definite attacking improvement but so there should be. Bruce must now build on this reprieve.

For Hasenhuttl, the foundations have long been in place. He just needs to find a way to prevent Southampton’s season from crashing down.

Tommy Little is tipped to be the 'next Bachelor' following split