Lying some 2.4 billion light-years from the Earth, in the constellation of Virgo, “3C273” is not only the brightest quasar on record, but also the first to be discovered and the best studied. In fact, its luminosity in the radio band means that 3C273 is often used to standardise the positions of the radio sources that define the International Celestial Reference System that allows astronomers to define the locations of planets, stars, galaxies, etc. However, 3C273’s brightness also has its drawbacks — in that it has long made it difficult to study the quasar’s surrounding host galaxy.

This phenomena, researchers from the Atacama Large Millimeter/submillimeter Array (ALMA) in Chile explained, is like staring directly into a car’s headlights: “The dazzling brightness makes it challenging to see the darker surroundings.”

They added: “The same thing happens to telescopes when you observe bright objects.

“Dynamic range is the contrast between the most brilliant and darkest tones in an image. You need a high dynamic range to reveal both the bright and dark parts in a telescope’s single shot.

“ALMA can regularly attain imaging dynamic ranges up to around 100, but commercially available digital cameras would typically have a dynamic range of several thousands. 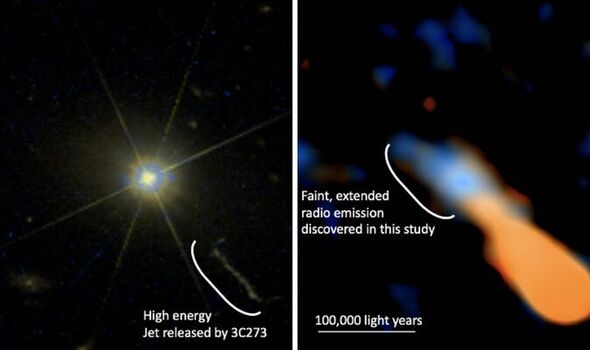 3C273 is not only the brightest quasar on record, but also the first to be discovered (Image: Creative Commons / ESA / Hubble / NASA)

As 3C273’s central nucleus is so bright and its galaxy so faint and diffuse, the dynamic range needed to study both have long been prohibitive — leaving our understanding of the host galaxy very much in the dark.

In their new study, however, Professor Shinya Komugi of Japan’s Kogakuin University and his colleagues used techniques called self-calibration and point-source subtraction to produce a better picture.

These methods, respectively, used 3C273 itself to correct for the effect of Earth’s atmospheric fluctuations on the telescope and reduce the leakage of radio waves from 3C273 to the galaxy.

This approach allowed the team to reach an imaging dynamic range of 85,000, which is an ALMA record for extragalactic objects.

READ MORE: Merging black holes can be ejected out of their host galaxy

The new image revealed two features of 3C273’s host galaxy, the first of which is a so-called “astrophysical jet”, a stream of ionised matter, known to be released from quasars and other black holes

Overlapping with this, however, is the second and more intriguing feature — a faint radio emission that extends for tens of thousands of light years over the galaxy.

The team have determined that the faint radio emission has a different source to the jet, as it has a constant, rather than changing, brightness over different radio frequencies.

Instead, the researchers believe that this extended radio emission comes from hydrogen gas in the galaxy being energised directly by the 3C273 nucleus — making this the first time that such a phenomenon has been seen occurring over such a large scale.

Pictured: Quasar 3C273 and its jet, as seen by the Chandra X-ray Observatory (Image: NASA)

This discovery may have implications for the question of whether the energy from a quasar nucleus can be strong enough to inhibit a galaxy’s ability to form stars.

Hydrogen gas is an essential ingredient in stellar formation — but if such an intense light is shone on the gas that it becomes ionised, no stars will form.

When astronomers normally look for signs of this process occurring around quasars, they rely on detecting the optical light emitted by the ionised gas.

However, the problem with this approach is that such light is absorbed by cosmic dust en route to the telescope — and the mechanism for emitting the light in the first place is very complex — meaning that it can be difficult to determine exactly how much light the gas is actually giving off.

Pictured: An artists impression of a giant galaxy with a jet (Image: ESO / NAOJ / NRAO)

In contrast, the radio waves detected by the researchers are emitted by relatively simple processes and are not absorbed by cosmic dust.

This makes it far easier to measure the amount of gas being ionised by 3C273’s nucleus.

In fact, Prof. Komugi and his colleagues report, at least 7 percent of the light being emitted by the quasar is absorbed by the gas in the surrounding galaxy, producing ionised gas equal in mass to some 10–100 billion times that of our Sun.

However, the team said, 3C273’s host galaxy appears to have had a lot of hydrogen gas before the formation of stars, so it appears that star formation was not suppressed by the quasar.

The method used to study 3C273’s host galaxy could be applied to others, the team reported.

“By applying the same technique to other quasars, we expect to understand how a galaxy evolves through its interaction with the central nucleus.”

The full findings of the study were published in The Astrophysical Journal.

The incident took place shortly after 1pm on...

With savings deals rising in recent months off...
AMED POST

The incident took place shortly after 1pm on...