The famous feline’s account had gone silent for nearly two weeks, sparking panic among followers used to regular updates with his jaded poses. Fans breathed a sigh of relief as 1.1million followers were treated to a post confirming he’d safely reached Europe. But the update on Wednesday, March 16, was tinged with sadness.

The post read: “We’re all right now. We worry very much about our relatives in Ukraine and will do the very best we can to help our country.”

Before the war, the 13-year-old rescue cat and Anna lived in Kharkiv, which was shelled on the first day of Vladimir Putin’s invasion.

The country’s second-largest city, it had a population of 1.4million, and was naturally considered a major target by Russia.

But as Moscow’s aggression nears the one-month mark, the city still stands, as citizens fiercely defend it from relentless bombs and rockets, which have for three weeks hit day and night.

A post in Stepan’s account said: “On February 24, early in the morning, we were sleeping at home. At 5 a.m., some explosion was heard, and I didn’t even understand what it was.

“After a while, after half an hour later, there were more explosions, the windows trembled. I jumped up and understood that something terrible was happening!”

The pair stayed in the building’s basement for two nights and lived without electricity for a week. Two shells landed in their front yard. 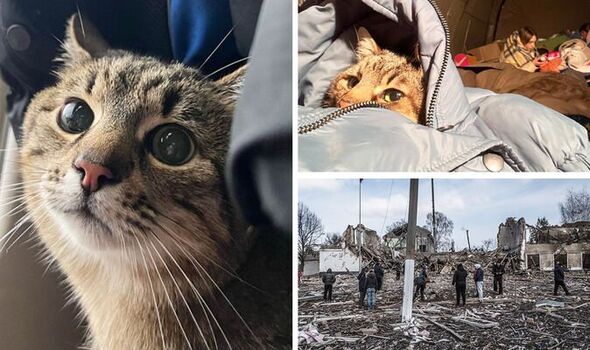 Stepan the Insta-famous cat has safely made it from Kharkiv, Ukraine to Europe (Image: @loveyoustepan via Instagram/Getty)

They eventually travelled 20 hours by train to the city of Lviv before crossing into Poland.

From there, they were able to travel to France with help of the World Influencers and Bloggers Association, which last year named Stepan one of the world’s top “petfluencers”.

The organisation is now renting an apartment for the cat and Anna to stay in.

Stepan’s owner Anna is one among more than 3.2million refugees who have fled conflict in Ukraine since the war began.

The figure will only continue to rise as a result of the ongoing Russian aggression.

The majority of refugees — which totals two million, according to the Polish Border Guard agency — arrived in Poland, where many had family or friends who opened the doors to their homes for them.

The breathtaking figure, made up predominately of women and children, has been met with a welcoming spirit by the Poles.

The number of people who fled from war-torn Ukraine war has surpassed the 3.2million mark (Image: Daily Express)

However, space is becoming an issue, with large cities including Warsaw and Krakow saying they have reached their capacity to host them.

While temporary accommodation centres set up in sports halls and conference centres across the country are housing people for a few days, longer-term alternatives are urgently needed.

The government and President Andrzej Duda are calling for greater international support.

Christine Goyer, the UNHCR’s Representative in the country, said: “This has been a tremendous effort from the people, local communities, municipalities and government of Poland in receiving and hosting new arrival.

“What is important now is that the international community steps up to help provide more durable support, while access to protection and asylum is ensured and maintained for all people seeking safety at Poland’s borders.”

In the UK, meanwhile, the Government’s response to the needs of Ukrainians fleeing the war remains under pressure.

The Homes for Ukraine refugee scheme, launched on Tuesday, March 16, was praised as a step in the right direction in comparison to the Home Office’s initial — rather restrictive — approach.

From Friday, March 18, UK residents can individually sponsor a Ukrainian national’s visa, with Housing and Communities Secretary Michael Gove saying there is no limit to how many Ukrainians can enter the program.

Each household taking in one refugee will be offered £350 a month, tax-free, and will not be expected to provide food and living expenses – though they can choose to offer this.

But many of those eager to offer rooms in their homes to Ukrainian refugees say there is a lack of clarity over how the No10’s plans are going to be materialised.

Without a system in place for matching host families with refugees, success relies on the applicant knowing a named individual from Ukraine they want to help.

This, according to Mr Gove, is to get things “up and running as soon as possible”.

The new program joins the Ukraine Family Scheme, which allows relatives of UK residents to apply to come to the UK since March 4.

So far, the Home Office has granted visas to allow only about 6,000 to travel to Britain – a number in stark contrast with the number of people offered shelter in other countries and, of course, with the fact that visas are not required in the European Union.

Previous articleMarmaris in Turkey is the holiday hotspot offering the best value for Britons in 2022
Next articlePrince William and Prince Louis enjoy park walk ahead of Royal tour – 'So adorable!'

The bloc has offered companies a way to...
AMED POST