Sturgeon torn apart as she fails to deliver after stealing show at COP: 'No real action!'

The Climate Change Committee’s (CCC) report, published on Tuesday, claimed that Scotland’s First Minister had failed to deliver any effective climate policies. This is despite Ms Sturgeon, who runs the Scottish Government in a coalition with the Scottish Greens, putting forward a “vision” to do so. With no “real-world action”, the report “Is Scotland Climate Ready?” authors argued that Scotland really needs to “up its game”.

Chair of the CCC adaptation committee Baroness Brown said that “action is not happening at the scale or pace required”.

This comes after Glasgow hosted the COP26 climate summit in Glasgow at the end of last year, where Ms Sturgeon stole the show and received an award for her commitments.

According to the report, the average temperature in Scotland has risen by 0.5C over the last 30 years.

It also outlined Scotland has experienced a five percent boost in rainfall during the winter months.

The sea level around the coast has also ramped up by 3cm every ten years. 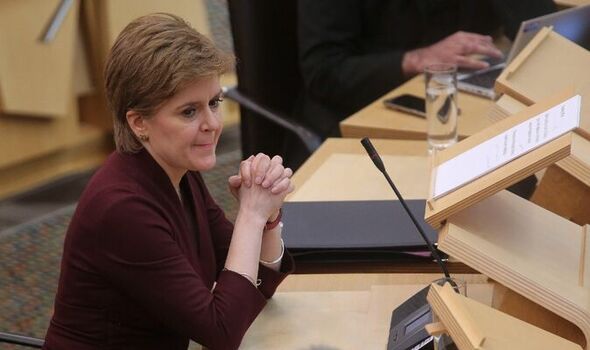 Sturgeon has been torn apart for failing to deliver on her climate “vision” (Image: Getty )

But to combat this, the CCC has seen no “credible plan” from Ms Sturgeon and her Government.

Ms Sturgeon had set out various climate targets in the second Climate Change Adaptation Programme (SCCAP2) as part of a five-year programme for Scotland.

But the CCC report argued that “much more needs to be done”, highlighting the “insufficient” aspects of the First Minister’s plan.

These included the plans to adapt the country’s infrastructure, with ports, airports, telecoms, digital and ICT infrastructure all facing “substantial climate risks”.

The report also found there was a “critical gap” in how the impact of policies was monitored and evaluated.

This left a “largely unknown” gap in vital information that reportedly let ministers frequently escape accountability, according to the report.

The report also found that action on business,, health and natural built environments had also “stalled”.

Baroness Brown said: “We commend the Scottish government on its vision for a climate-ready Scotland, but the reality is that action is not happening at the scale or pace required.

“In most sectors including the natural and built environments, health, infrastructure and business, action has stalled.”

Baroness Brown stressed the need for the First Minister to urgently ramp up her efforts or else risk facing disaster.

She said: “Without a renewed sense of urgency, the significant changes we are already seeing in Scotland today will have impacts on all areas of Scottish society and nature in the years to come.”

Michael Matheson said he accepts “that more needs to be done” (Image: Getty )

Colin Smyth, Labour’s net zero spokesman, said the CCC report laid bare the “atrocious” record that the SNP and Green coalition have on the environment.

He said: “After 15 years, the SNP have delivered an abundance of hollow rhetoric and gesture politics – but speeches and photo ops won’t tackle the climate and nature emergency.

“The Greens are no longer worthy of the name, now that they’ve abandoned the last of their principles to prop up this failing government.”

Back in November, BBC Chief Political Correspondent called out Ms Sturgeon for Scotland’s “tiny” commitment to climate change at COP26.

How Britain can lead the way in racing to net zero (Image: Express)

Adam Fleming was referring to Scotland’s £2million financial climate contribution when confronting the First Minister, saying that it was “less than tiny”.

Michael Matheson, the SNP cabinet secretary for net zero, said: “Preparing for the impacts of climate change which are already locked in forms a key part of a just transition to net-zero, and we are making real progress.

“We are pleased that the committee supports our vision for a climate-resilient Scotland. However, we accept that more needs to be done.

“This is a global challenge and we are not alone in needing to accelerate progress.”

Previous articlePutin cancer: Kremlin furious after President health claims ‒ 'Bite your tongue'
Next article'Treat 'scum' with respect?' Carole Malone loses it over demand to be soft on prisoners

How to build your own BBQ: Tips and tricks from the experts

The BBC journalist recalled to Express.co.uk something she...

How to build your own BBQ: Tips and tricks from the experts

The BBC journalist recalled to Express.co.uk something she...