The First Minister has renewed her calls for a second Scottish independence referendum in recent weeks, batting away arguments from challengers on the legality of a new vote. Defence is not devolved from Westminster to Holyrood, with Downing Street dictating military spending in Scotland for a number of crucial UK bases.

But if the Scottish Government were to seize control of military forces in Scotland in the event of a ‘Yes’ vote, the loss of these bases could threaten not just the capabilities of the UK, but of the entirety of NATO, according to a Scottish Conservative politician.

Tony Miklinski, Scottish Tory councillor for Cupar, Fife, told Express.co.uk that the Scottish military is a crucial part of the UK’s armed defence and “critical” to the NATO armoury staring down threats from Vladimir Putin.

Mr Miklinski, who served in the Royal Navy for over three decades, said his military career highlighted “what a great capability, and history, and tradition, and ethos that the British military have”.

The place for Scottish servicemen within the British military is something Mr Miklinski highlighted. 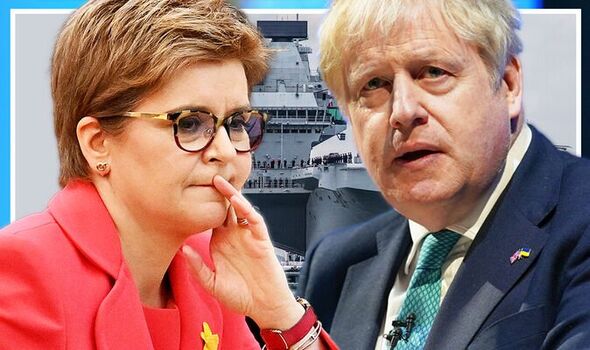 The First Minister has renewed her calls for a second Scottish independence referendum (Image: Getty)

He said: “It would be, first of all, a huge shame that [it] would be broken apart.”

But the bigger geopolitical and security picture goes further than this, in the realtered international context of Russia’s invasion of Ukraine, Mr Miklinski said.

He continued: “If you then add the value of the Scottish bases in Leuchars, in Faslane, and Rosyth, and Lossiemouth that are critical to NATO in looking after the North Sea and the Northern approaches.”

To lose them, he said, “would weaken both the UK and NATO forces”.

READ MORE: Lord Frost loses it with Ireland as he explodes at Simon Coveney

An independent Scotland would “without question” cripple the ability of the UK and NATO to respond to threats from Vladimir Putin, unless the Scottish government conceded to some retained UK control over military bases north of the border.

He posed the question: “And why would they? They want freedom from the UK.”

He predicted that the loss of NATO and UK military presence in key bases in Scotland “would leave the rump of the United Kingdom” exposed to military offensives from the north.

This is more likely to be where “the Russian fleet and forces can get access, especially with submarines”.

Speaking to LBC, the First Minister said: ‘My plans and my thinking haven’t changed’ (Image: PA)

“So we’d play into the hands of a successful Putin, if that were the outcome we faced.”

He then issued a dire warning for the future of Scotland’s armed forces, should a second independence referendum succeed.

He added: “Given the financial straits an independent Scotland could be in […], there will be no money to fund a significant alternative defence force.”

Ian Blackford said the war in Ukraine should not derail plans for a second vote (Image: Getty)

He said the idea that Scotland’s defence and security forces would emerge unscathed from an independence referendum that the SNP would celebrate was “just not real”.

He said: “It’s part of the fantasy world that is woven by Nicola Sturgeon and the SNP to convince people to follow their line.”

This comes as Westminster’s SNP head, Ian Blackford, said the war in Ukraine should not derail plans to hold another vote before the end of next year.

Mr Blackford told BBC Scotland: “Is anybody suggesting that [Vladimir] Putin should determine the timeline for an independence referendum in Scotland?”

However, an ex-advisor to former First Minister Alex Salmond said the referendum was “unlikely” to be carried out by Ms Sturgeon’s timeline.

Writing in the Sunday Times, Kevin Pringle said: “It is unwise to make any definite predictions in such volatile times, but it seems reasonable to say out loud that an independence referendum is unlikely to take place by the end of next year, given the hurdles to be overcome and extensive preparations required.”

Speaking to LBC, the First Minister said: “My plans and my thinking haven’t changed.

“We, right now, should be reminded, above all else, how lucky we are to live in a free democracy where we can put forward our case for political constitutional change, argue that case passionately, whatever our views on that might be, and trust people to decide.”