Sydney is celebrating the 90th anniversary of the unveiling of the Harbour Bridge, which has since hosted millions of cars, countless climbers, fireworks displays and a historically defining reconciliation walk. 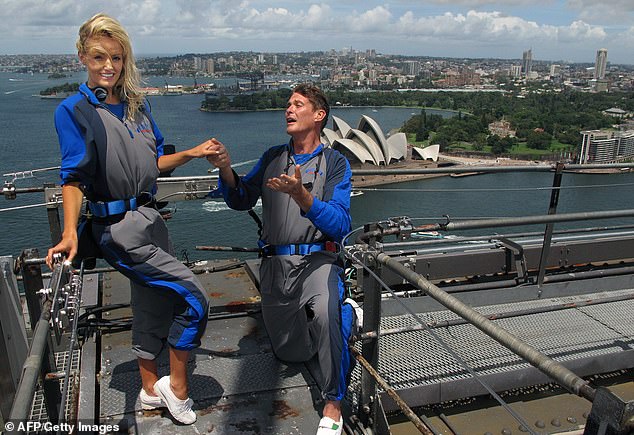 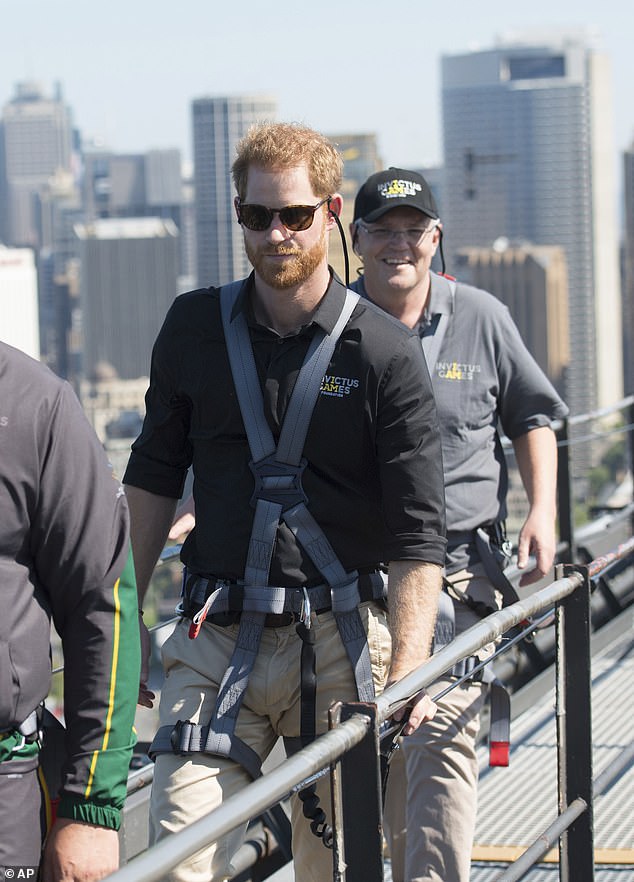 NSW Premier Jack Lang was to open the bridge by cutting a ceremonial ribbon with a pair of scissors before a boisterous gathering of 300,000 Sydneysiders at the height of the Great Depression on March 19, 1932.

However Francis de Groot had other ideas.

The former cavalry officer and member of the right-wing New Guard militia, dashed past Lang on a racehorse as the clock struck 10, lunged forward and slashed the ribbon with a sword in one cinematic fell swoop. 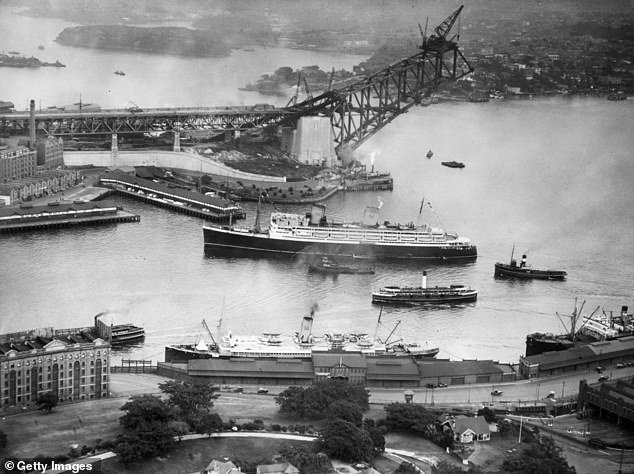 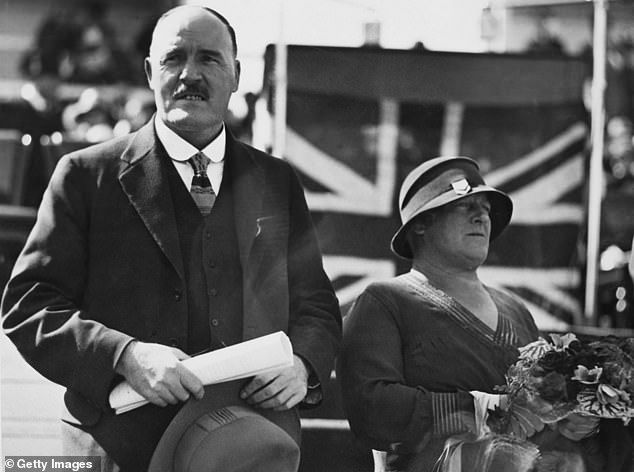 Pictured: Intended ribbon-cutter and NSW premier Jack Lang and his wife at the bridge opening ceremony 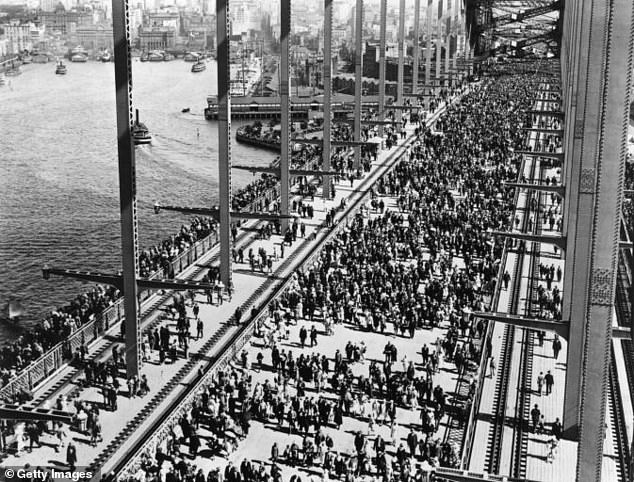 Pictured: Crowds crossing the Harbour Bridge for the opening celebration in March, 1932

Historian Ian Hoskins, who wrote an award-winning book about Sydney Harbour, told AAP the bridge soon became a focal point for Australia’s place in the world as a modern nation.

“The Sydney Harbour Bridge not only became a symbol of Sydney, it became something people recognised as Australian very quickly,” he said.

“It symbolised a new modern Australia. It said, ‘look what we can do, we built this astonishing bridge in only eight years’.”

Dr Hoskins said the massive Bridge Walk for Reconciliation in 2000 when 250,000 people rallied for a new social contract with Indigenous Australians was not only “visually appealing” but a potent political moment. 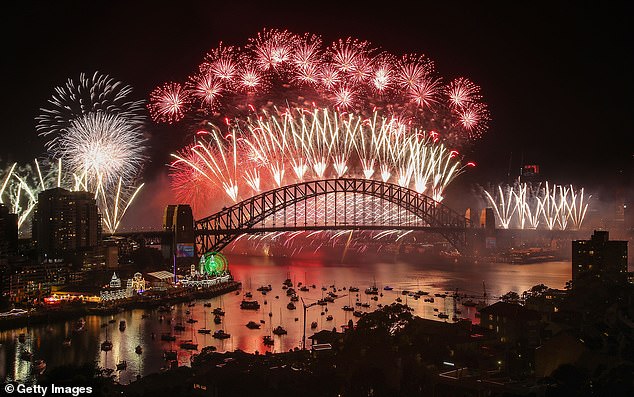 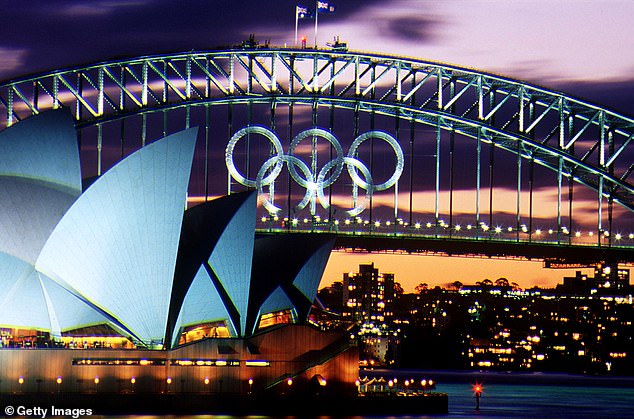 Pictured: Sunset behind the Harbour Bridge in the lead up to the 2000 Sydney Olympics

Farmer and war veteran Ian Litchfield, 95, said he might bring out a bottle of Glenfiddich scotch while watching the anniversary celebrations from Hampton in central western NSW on Saturday.

The tipple will be to honour his father, one of the lead engineers who worked on the bridge.

“He was (bridge proponent John Bradfield’s) chief supervising engineer for the fabrication and erection of the steelwork,” Mr Litchfield told AAP. 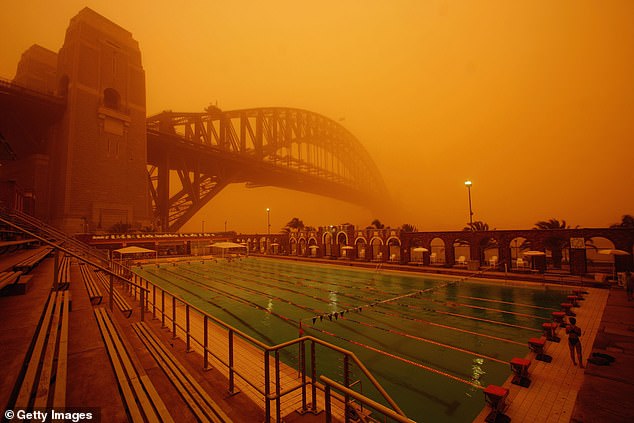 Through thick and thin: The Harbour Bridge has been a cultural icon for nine decades, here pictured in a dust cloud blown over Sydney in 2009

Pictured: A poster promoting the opening ceremony of the Sydney Harbour Bridge reads ‘AUSTRALIA IS CALLING’

“We were brought up with the bridge. It used to be discussed at the dinner table when we were young.

“I’m very proud of my father.”

Mr Litchfield does not remember walking across the mighty structure with his dad as a five-year-old but the photographs of the occasion are precious to him.

What he does recall vividly is bursting with pride when he later came to Sydney and crossed the harbour by bus to attend reunions with mates who served on HMAS Bataan in the Philippines during World War II.

“I always used to enjoy it going across. I tried to get in the back part of the bus so you’d be higher up so you can see down the harbour,” he said.

Their last gathering was about four years ago. Mr Litchfield is the only one still walking

Previous articlePrince Harry and Meghan Markle 'teed up to present the Best Picture Oscar' next week
Next article'Please help us': Weary voices call from Mariupol, where bodies line streets

Kourtney Kardashian and Travis Barker said "I do" for...
AMED POST