The best pubs and restaurants in the UK's national parks revealed

Walking has almost become a national pastime, and there’s nowhere better to increase your daily step count than on a visit to one of our National Parks.

As well as offering paths through ancient woodlands and trails up misty mountains, they are also home to some of the UK’s best gastropubs, tea rooms and even Michelin-starred restaurants – which all make for some satisfying pitstops for weary walkers.

Daffodil Hotel, which has just carried out a food-focused survey of National Parks that revealed their wealth of places to tuck in, sits on the shores of Grasmere in the Lake District. From here guests can hike to Helm Crag and take in spectacular views from its summit. 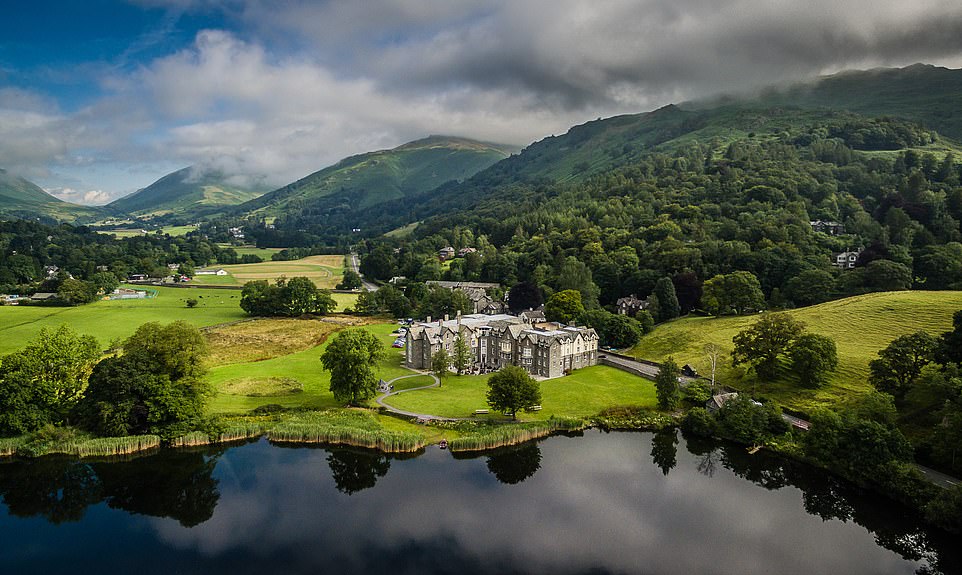 Daffodil Hotel sits on the shores of Grasmere in the Lake District. From here guests can hike to Helm Crag and take in spectacular views from its summit 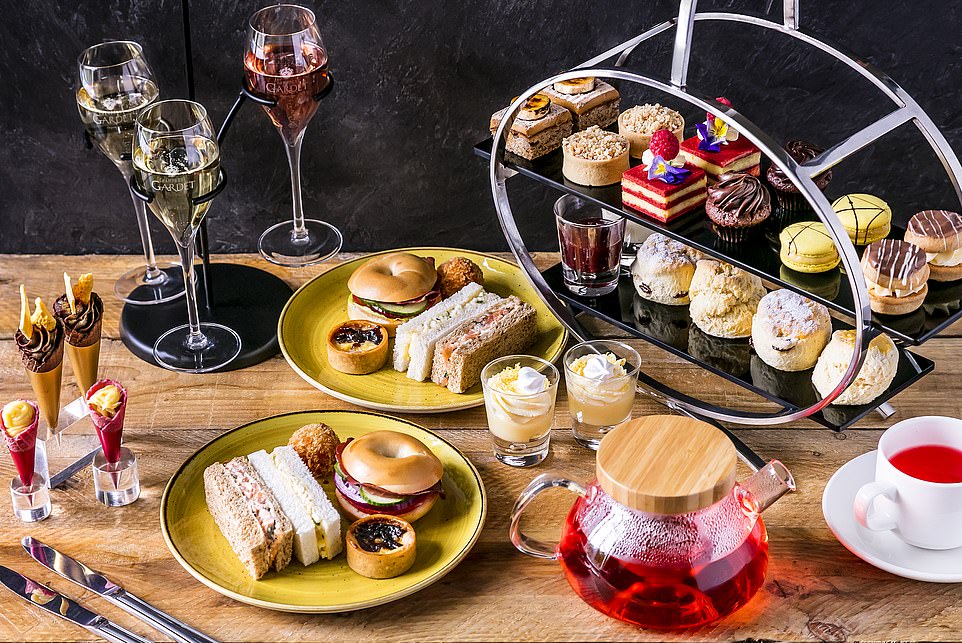 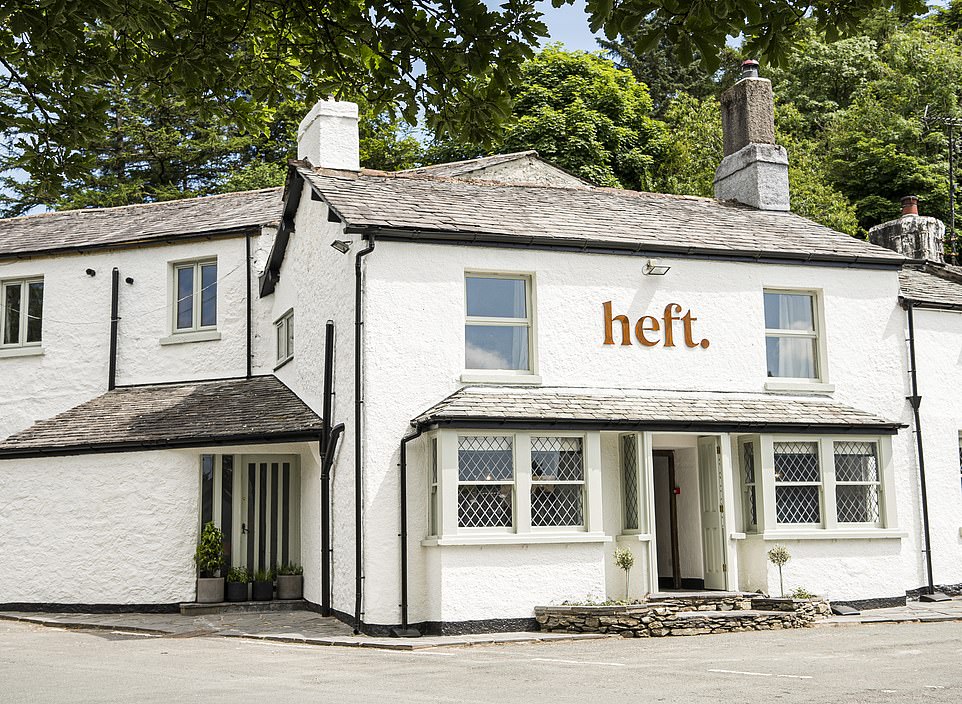 Championing local produce, and named as one of the top gastropubs in the UK, is Heft in High Newton

On your return, reward yourself with one of the hotel’s famous Cumbrian afternoon teas. Rooms from £150 per night (daffodilhotel.co.uk).

Championing local produce, and named as one of the top gastropubs in the UK, is Heft in High Newton, also in the Lake District. This 17th Century inn is run by locals Kevin and Nicola Tickle.

Inspired by his rural childhood, chef Kevin serves up an inventive take on British cuisine, such as fried monkfish cheek with garlic aioli and pork chops glazed in cider. The inn has five bedrooms currently being prepared for guests (hefthighnewton.co.uk).

With its expanse of purple heather moorland and soaring views from its high peaks, the North York Moors National Park offers walkers a true immersion in nature. Harnessing this sense of authenticity is The Black Swan at Oldstead, run by chef Tommy Banks.

This Michelin-starred restaurant-with-rooms offers just one tasting menu using seasonal ingredients grown in the kitchen gardens, costing from £135 to £150pp, or for parties of two to four a tasting menu and B&B costs from £280pp (blackswanoldstead.co.uk).

Combining craggy peaks, cascading waterfalls and wildflower meadows, no one would dispute that the Yorkshire Dales are simply breathtaking. The Black Bull Inn at Sedbergh is found in the heart of this scenic beauty at the foot of Howgill Fells. 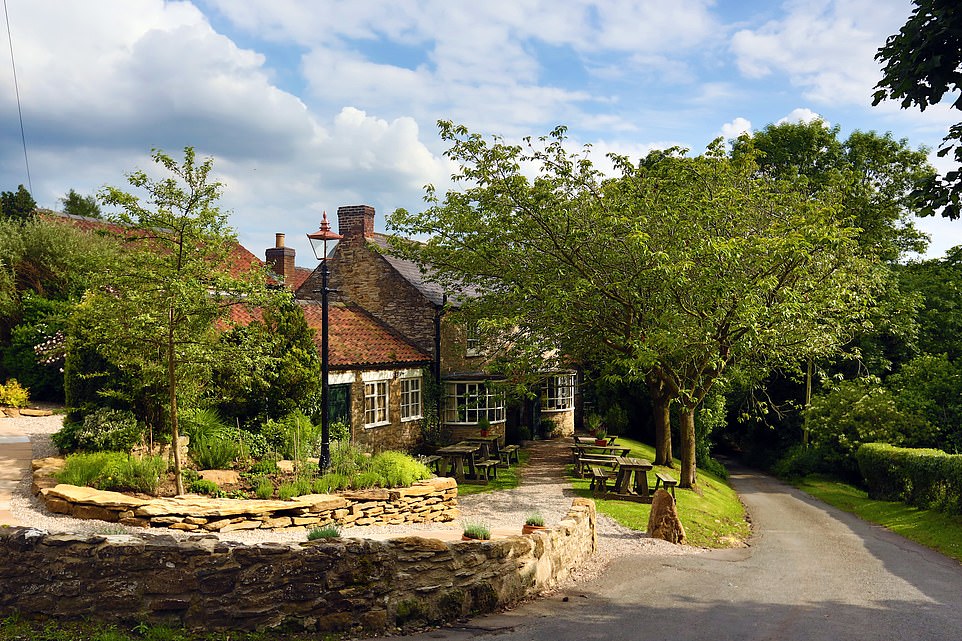 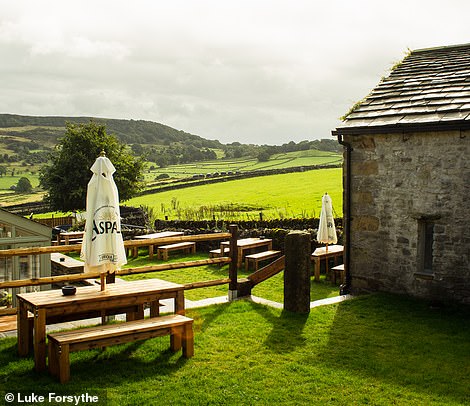 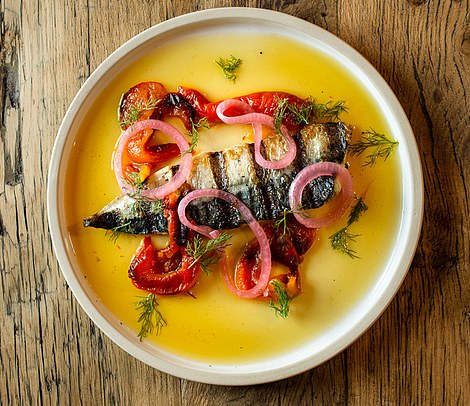 The Blind Bull, in Little Hucklow in the Peak District (left), is making waves with its contemporary and bold cuisine (right) using the best local ingredients

Owners James Ratcliffe and chef Nina Matsunaga are passionate about principled sourcing of ingredients, with Nina’s menus having a Japanese twist – highlights include the Howgill Herdwick lamb with tofu, sesame and Korean chilli. Rooms from £125 per night (theblackbullsedbergh.co.uk).

Encompassing a section of Hadrian’s Wall and the Bronze Age burial site at Turf Knowe, the Northumberland National Park is perfect for ramblers who want to tap into a sense of history as they roam.

Capturing the heritage of the region, The Pheasant Inn in Hexham is renowned for its house ales and traditional Sunday roasts. Slow-roasted Northumbrian lamb, and vegetables from the inn’s gardens, are the ideal fuel to charge you on your way. B&B from £130 per room per night (thepheasantinn.com).

The Blind Bull, in Little Hucklow in the Peak District, may be carved out of one of Britain’s oldest public houses, dating from the 12th Century, but it is making waves with its contemporary and bold cuisine using the best local ingredients. A renovation will see new rooms and a cosy cottage soon open, making it a perfect bolthole from which to explore the beauty of Derbyshire (theblindbull.co.uk). 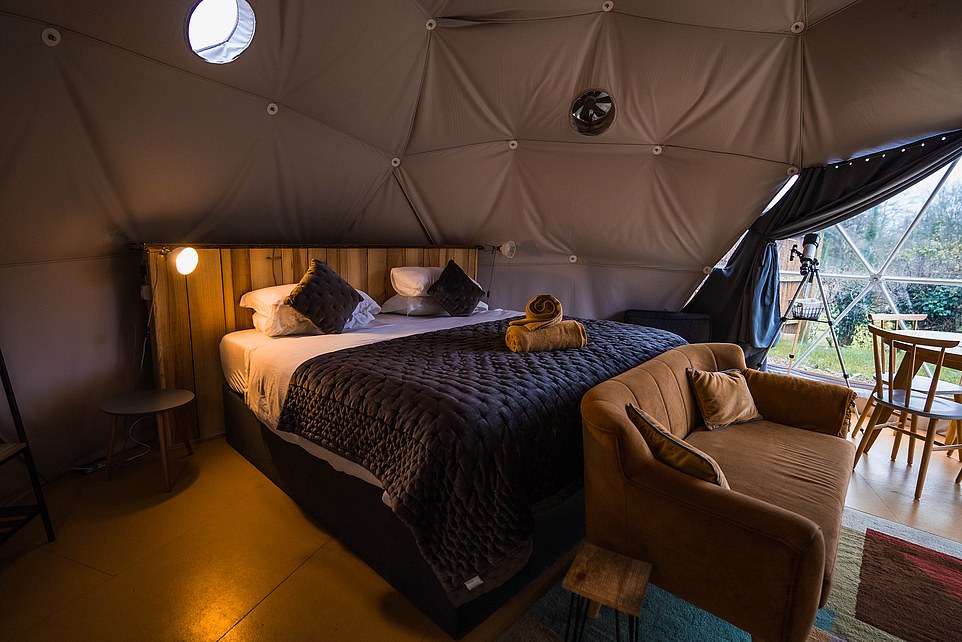 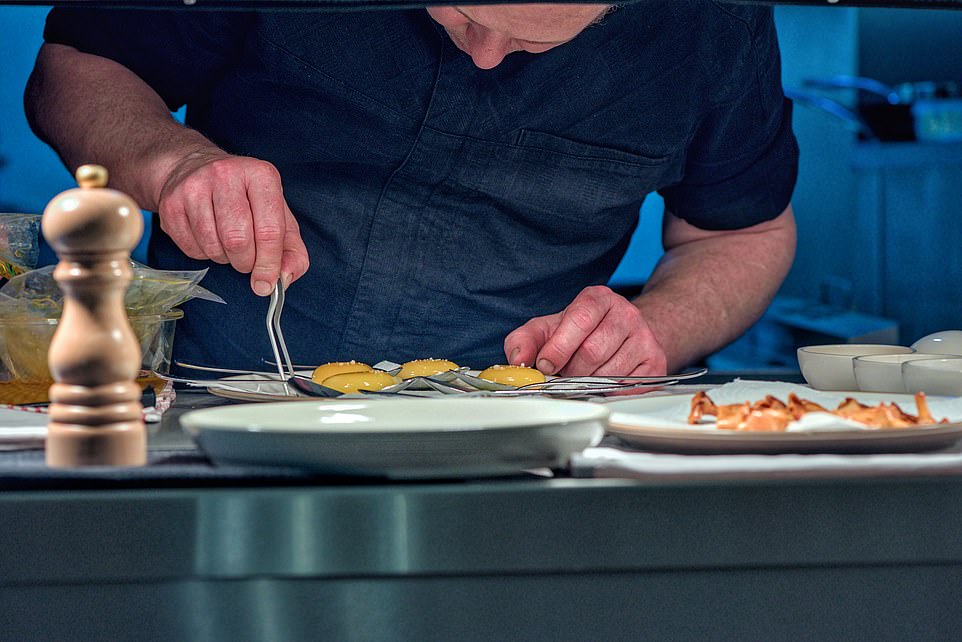 One hotspot is the new Annwn Restaurant, run by forager Matt Powell. The self-styled wild food restaurant is found at the idyllic Little Retreat glamping resort, and is tucked away in a secluded, walled garden (littleretreats.co.uk).

From here you can explore the Cleddau Estuary and follow routes along the glorious Pembrokeshire coastline. Before settling down for the night you can sate your appetite with Powell’s sublime ten-course tasting menu (£120pp) which pays homage to the Welsh landscape and changes throughout the seasons (annwnrestaurant.co.uk).

Meanwhile, situated in the Brecon Beacons National Park, The Bear Inn, in Llandovery, offers an Asian-influenced vegetarian menu. By day, you can explore the various trails around the epic Llyn y Fan Fach, a dammed lake on the western border of the Black Mountains.

As kestrels swoop overhead, and grazing sheep eye you cautiously, it’s a dramatic experience, taking you under the shadow of the summit of Bannau Sir Gaer. By night, you can bed down in The Bear’s pretty rooms, from £80 (01550 721777).

Dartmoor, with rolling moorland and gurgling streams, has a mystical, untamed quality. After a day exploring the wilds, a night at smart foodie hotspot Gidleigh Park will soon see some order restored.

Found on the northern edge of the National Park, the Tudor-style manor house has shaken off its old-school connotations by appointing innovative chef Chris Eden to head up its kitchen.

Expect a refreshingly modern British menu and a bumper wine list – Gidleigh is home to one of UK’s best hotel wine cellars, with more than 13,000 bottles to choose from. Rooms from £275 per night (gidleigh.co.uk). 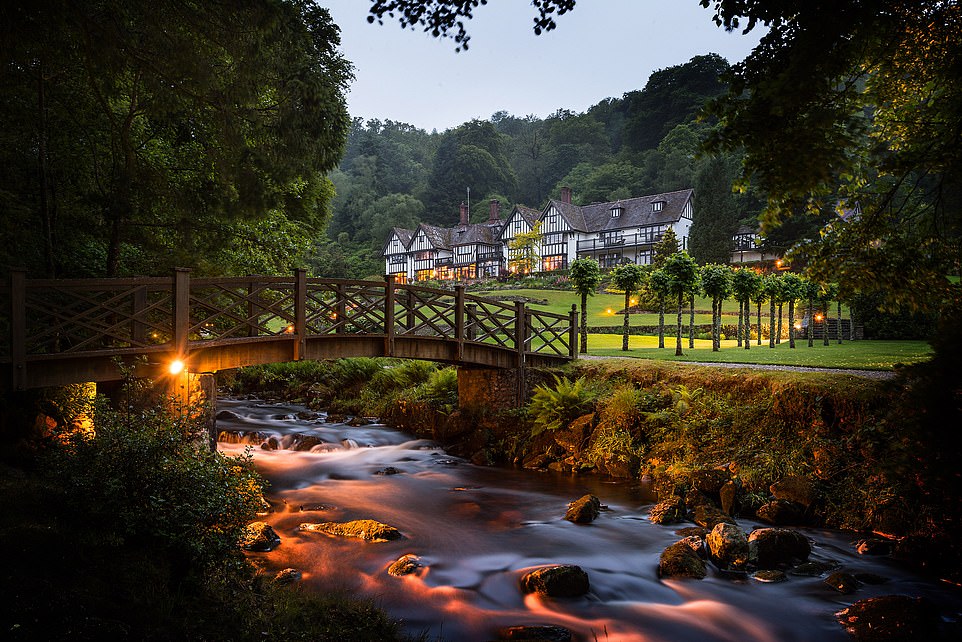 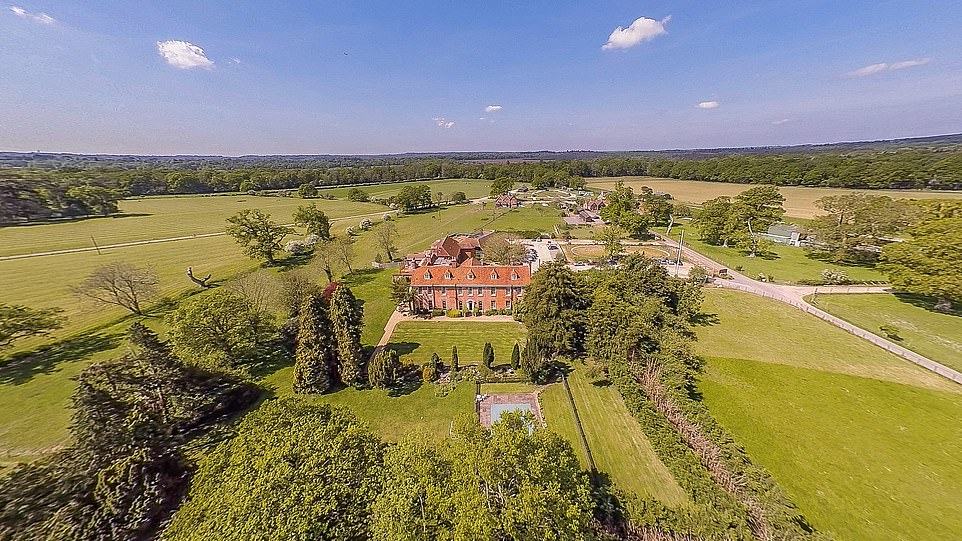 One of the plush bedrooms at New Park Manor, with a blend of antique-style and contemporary furnishings

With a wealth of artisan food producers and independent restaurants, the Pembrokeshire Coast National Park has long been a rich foodie destination. The New Forest, with tranquil coastal walks and secluded trails, is undoubtedly one of the UK’s loveliest spots for wandering.

New Park Manor, originally a 17th Century hunting lodge, is a 25-bedroom hotel a few miles south of Lyndhurst and has recently launched The Stone’s Throw Kitchen to showcase the very best of Hampshire produce. Rooms from £119 per night (newparkmanorhotel.co.uk).

A tramp across the South Downs National Park will take you through a whole gamut of changing scenery, ending with the welcoming sight of The Halfway Bridge in Lodsworth.

This restaurant-with-rooms is a 250-year-old former watermill turned coaching inn which changes its Mediterranean-influenced menu according to what’s in season.

Gems include cherry tomato fondue with burrata, and apple and honey-glazed belly of pork. Rooms from £150 per night (halfwaybridge.co.uk).

Last month, she uploaded a screenshot of one...

Last month, she uploaded a screenshot of one...