The Premier League gets to observe a battle of the Bundesliga’s finest during Saturday’s early kick-off, as Southampton host Chelsea at St Mary’s.

Thomas Tuchel goes up against Ralph Hasenhuttl in what will be one of the most eagerly anticipated managerial showdowns in recent years.

Both men are well accustomed to one another, with Tuchel’s Borussia Dortmund and Hasenhuttl’s RB Leipzig having battled to be the second force in Germany behind Bayern Munich for years.

Chelsea are yet to lose a game under Tuchel, while Hasenhuttl has been mooted as a potential manager of the season candidate for his fine work in resurrecting the Saints on a shoestring budget.

But, how will the two old foes get on when it comes to competing on the Premier League stage? Sportsmail takes a look. 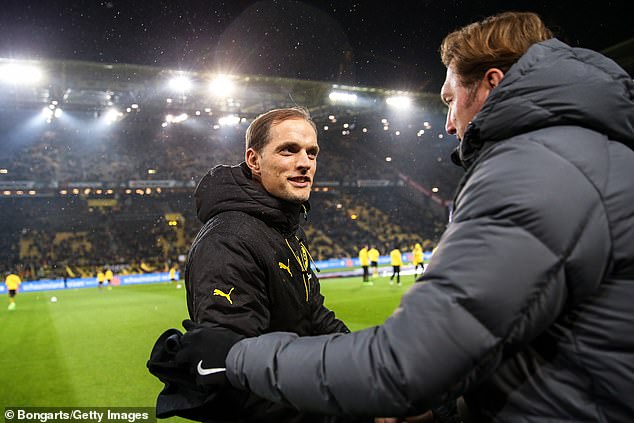 This can hardly be said to be some age-old rivalry, however the two men are very well acquainted.

During their time in the German top flight Tuchel and Hasenhuttl found themselves often likened to the other.

Both innovators and tasked with achieving big things with the underdogs, the pair have crafted very distinct styles as a result.

Of the four times they have met, Tuchel was Dortmund manager on each occasion. Hasenhuttl, however started with FC Ingolstadt 04 before taking the hot seat at Leipzig. 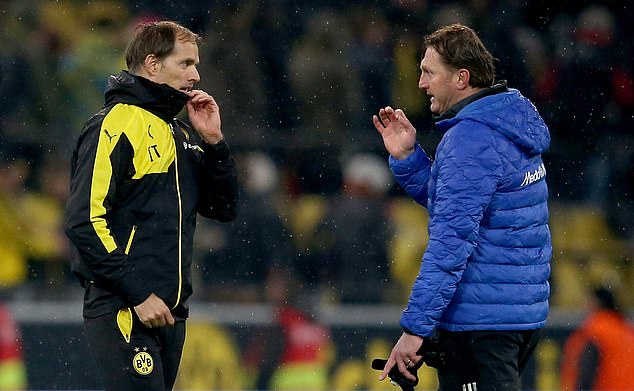 The pair have met four times, the first two being when Hasenhuttl managed FC Ingolstadt

The first two meetings came during the 2015-16 season, when the campaign saw Tuchel’s Dortmund dominate Ingolstadt home and away, scoring six goals in the process.

On August 23, 2015, Hasenhuttl pitted his methods against Tuchel for the first time. It would end very sour.

Dortmund arrived at Ingolstadt’s stadium early in the season and subjected the lowly side to a top flight masterclass, barely breaking a sweat on their way to a 4-0 victory.

The following year, in September 2016, Hasenhuttl would have his revenge. Newly instated as Leipzig manager, the Austrian pulled off a 2-0 victory over Dortmund in their own back yard, showing a sign of things to come as the Red Bull backed team rose to prominence.

Later in that season, in February 2017, Dortmund would get their own back of sorts with a slender 1-0 victory. It was to be the final time the pair would meet as managers, before Saturday’s showdown in the Premier League.

Both Tuchel and Hasenhuttl have been praised for their high-pressing, relentless football.

During their respective spells in Germany both men shared the similar situation of trying to shake off comparisons with Jurgen Klopp.

Tuchel was still trying to step out of the shadow of his charismatic countryman, while Hasenhuttl was often compared to him due to his rise through the ranks – as Klopp did with Mainz.

Already, since his arrival at Stamford Bridge, Tuchel has started to stamp his mark on Chelsea’s team. 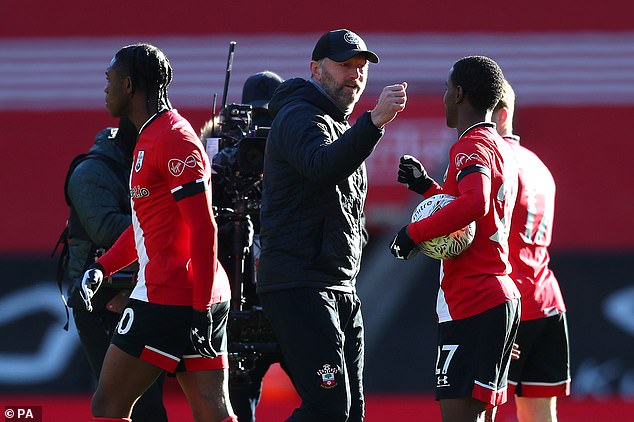 Tried and trusted veterans like Marcos Alonso have returned to the side at the expense of big summer signings Ben Chillwell, as Tuchel has adopted a back three with wing-backs system which has seen key youngsters like Callum Hudson-Odoi adjust their positions.

More emphasis has been placed upon the previously out-of-favour Jorginho in the centre of the park, while Tuchel has made no secret of his aim shaking star striker Timo Werner out of his rut.

In their recent win over Newcastle, Chelsea showed a three-pronged attack under Tuchel. With Tammy Abraham leading the line and both Werner and Mason Mount slipped in just behind him.

Hasenhuttl meanwhile knows he does not have the manpower of Tuchel, and just like their Bundesliga games he will enter this fixture knowing his must tactically outmanoeuvre his counterpart. 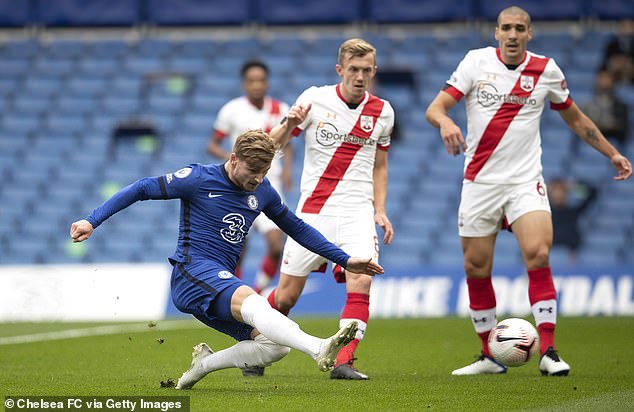 Despite starting the season so strongly, Southampton have lost each of their last six  league matches in a miserable run. Things went awry ever since the side defeat reigning champions Liverpool 1-0 in early January – in a victory which meant so much to Hasenhuttl that he dropped to his knees at the final whistle.

That match was arguably the last time Southampton were seen as their ruthless selves, and fielded a fairly routine 4-4-2 formation that evening.

Since, Hasenhuttl has added Takumi Minamino from Liverpool; a loan signing which now enables him to field a playmaker between the lines as both a foil and link for star striker Danny Ings up front.

The Austrian manager also has the red-hot form of Stuart Armstrong to call upon, with the former Celtic man causing untold problems for opponents in recent weeks.

An added twist to Saturday’s tale comes in the form of Zsolt Low, the man who was once at the shoulder of Hasenhuttl but now is flying the Chelsea colours with Tuchel.

This week Hasenhuttl admitted Low will be crucial for Chelsea ahead of the fixture, and will do his utmost to see Southampton continue their losing form.

This, Hasenhuttl pointed out, is because Low knows his game-plan inside and out. 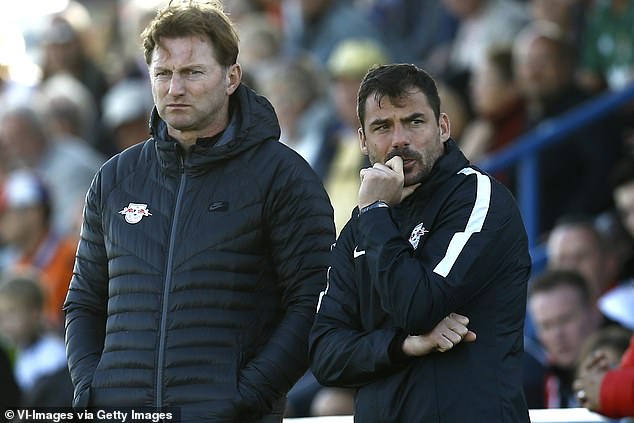 Low was assistant to Hasenhuttl at RB Leipzig between 2016 and 2018 before he was poached by Tuchel when he was in charge at Paris St Germain.

Tuchel also coached Low when the head coach was the boss at Mainz before moving on to take the reins at Dortmund.

Speaking at his pre-match press conference ahead of the clash, Hasenhuttl told reporters what he knewabout Low.

The Saints boss said: ‘I don’t only know him (Tuchel) I know his assistant [Zsolt Low] very well.

‘He is fantastic and I worked very well with him for two years in Leipzig. He knows me very well and knows the way we play very well, that doesn’t make it easy for us to be honest.

‘It is obvious that he knows what he does and he is a manager that immediately brings his game plan to a team. You can immediately see the development of Chelsea in the short time he has been there, it has been massive.

‘They play a completely different style of football now and for me that is a sign of a manager that has a clear plan.

‘But the challenges you have in the Premier League are never easy. So we have to concentrate on what we can do best, look at the opponent and their qualities, and then our team must have a perfect day. That’s it.’ 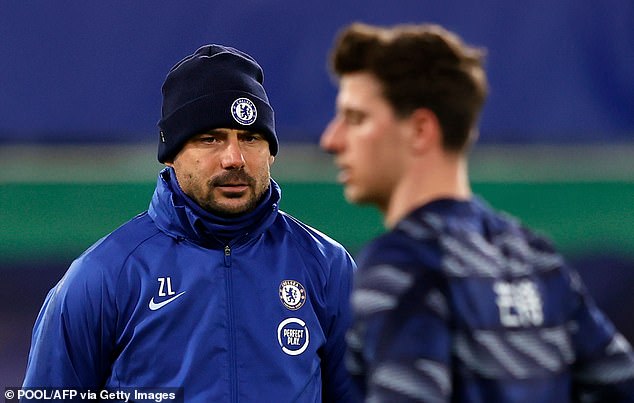 A ‘perfect day’ is a big ask for a team coming off the back of six straight league defeats. Chelsea’s contrast – of six straight wins – couldn’t make things more difficult for Hasenhuttl.

If one thing is for certain however, Southampton’s Austrian boss loves being the underdog.

The stage is now set, as the battle of the Bundesliga bosses finally comes to English shores.