While negotiations between Ukrainian and Russian officials have continued through the week, Russia’s President Vladimir Putin today accused Ukraine of “trying to drag out the negotiation process” by putting forward “unrealistic proposals”. In a call to German Chancellor Olaf Scholz this morning Putin said Russia was “ready to propose a search for solutions in line with its well-known principled approaches”. Talks have reportedly made significant progress in the past week on terms which allegedly included a Russian ceasefire and withdrawal in exchange for Ukraine’s capital, Kyiv, declaring neutrality.

However the West fear Russia may not be negotiating in good faith, and are merely buying time to replenish their army.

Meanwhile, Russia were accused of “war crimes” by Foreign Secretary Liz Truss and US President Joe Biden this week, after Putin’s army bombed a theatre in Mauripol, reportedly sheltering between 1,000 and 2,000 Ukrainian civilians.

Last week Russian forces also bombed a maternity hospital and a pre-school, as their invasion of Ukraine continues to rage on. 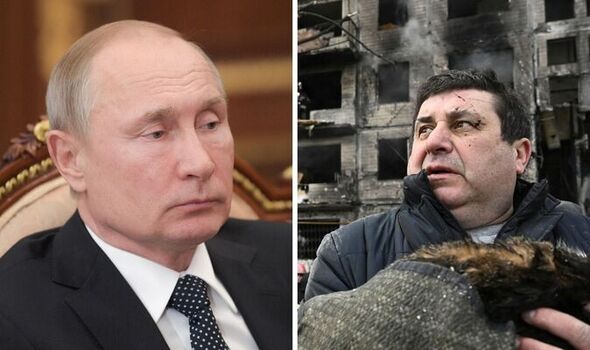 Russia have been accused of war crimes during their invasion of Ukraine (Image: Getty)

He told Express.co.uk: “My fear is there will be a more brutal period of the war for civilians and that unfortunately after that the Ukrainians are going to be asked to make incredibly difficult choices about territory.

“I think we’re in for a period of real brutality because to put pressure on Ukrainians in negotiations, I think the Russians will bombard large Ukrainian civilian populations and I fear that there are dark times coming for some Ukrainian cities.

“I think it’s possible that Ukraine stepping back from its NATO ambitions will be a helpful condition.”

Mr Connolly added that Ukrainians may be asked to make “incredibly difficult” choices and pay an “enormous price” by giving up land in negotiations with Russia.

The Russia expert added: “The danger is that if you look at a map of Ukraine and see it as the face of a clock, 12 o’clock is around Chernobyl ‒ that’s where the Russians came in.

“If you go round the clock face to six, you go through these ridiculous puppet republics that Putin has created in Donetsk and Luhansk, and you come down towards the Crimean peninsula which they already hold.

“I think Russia might settle for taking a huge slice of Eastern Ukrainian territory and giving itself a land connection to the Crimea and the Black Sea, but that would be an enormous price to ask the Ukrainians to pay, and would be rewarding the Russians with territory for starting a war of aggression.

“But there is a possible landing point there and I don’t think the Russians have the capacity to occupy Ukraine.”

Don’t Miss:
Russia ‘miscalculated’ Ukraine invasion as Putin ‘shocked’[OPINION]
Putin’s threat to UK: ‘I could sink your ships without a world war'[INSIGHT]
Putin’s attack on British values in furious row with David Cameron[ANALYSIS]

The Russian invasion of Ukraine is more than three weeks old, and the death toll is thought to have exceeded 10,000 yet neither side has made a decisive military breakthrough.

Russia has the fifth largest army in the world, yet the attack on their neighbour has been poorly coordinated, while Ukrainians have resisted the invasion valiantly.

Though it is thought that Ukraine ultimately won’t be able to resist the Russian onslaught, Mr Connolly insisted that Putin would not be able to occupy Ukraine.

He said: “I don’t think Russia has a large enough army to occupy a country the size of Ukraine.

Volodymyr Zelensky has recieved international acclaim for his leadership of Ukraine (Image: Getty)

“Ukraine is the biggest country in Europe. It has a population of 40 million, many of whom are going to be immensely hostile to occupation.

“Occupation is expensive and difficult and uses colossal amounts of manpower and costs a lot of money.

“I don’t think Russia has that option.”

Since Russia’s invasion last month, the country has been hit with severe sanctions by the West.

The ruble has tanked in recent weeks, while interest rates have shot up from nine percent to 20 percent.

Meanwhile the Moscow Stock Exchange was forced to close, after western sanctions froze Russia’s access to its foreign currency reserves.

Russia says it has made $117million (£89million) payment on two dollar-denominated bonds, but investors are reportedly yet to be paid.

If payments are not made by April 30, Russia would be in default.

Amber Heard is on the witness stand again Monday...

This weekend saw the Royal Family come under...

Lewis Hamilton has been warned that wearing jewellery...
AMED POST

Amber Heard is on the witness stand again Monday...

This weekend saw the Royal Family come under...