A trail camera captured a rare moment when a bobcat attacked and stole a Burmese python’s eggs in Florida – the first time an animal was recorded attacking a Burmese python in the Everglades.

The bobcat was roaming around the Big Cypress National Preserve – roughly 50 miles from Miami – June 1 when he found a nest of 42 python eggs. The US Geological Survey (USGS) camera recorded it biting the python eggs, then popping its head up to look around every few seconds.

The python was nowhere to be seen.

At one point, the animal seemed scared, rearing back before leaving the nest. It left, but then came back later that night and sat next to the eggs keeping watch before taking off again.

The next morning, the animal returned and began covering the nest with underbrush, picking up sticks and brushing leaves over it. Then it sat on top.

After leaving the nest for the day, the bobcat came back to find the 85-pound, 14-foot python next to it, soundly sleeping. The bobcat turned back and headed off to safety.

However, the next morning, the bobcat came back and found the python still curled up by the nest. The bobcat took a swing at it and the snake began unwinding, rising up in height. 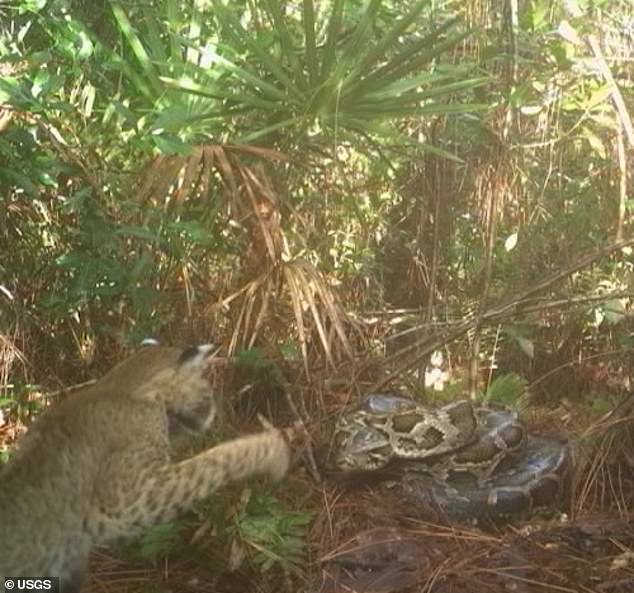 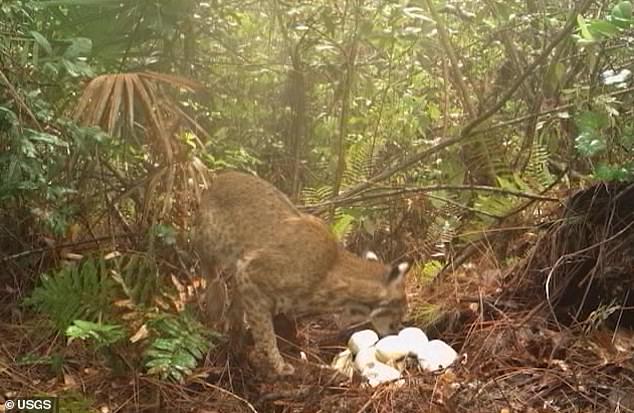 The bobcat – one of the few predators of adult-sized python – was seen eating, removing and destroying the 42 eggs in the nest 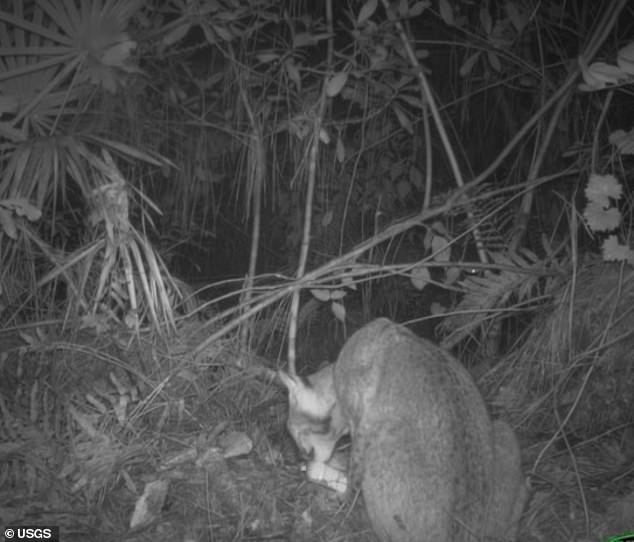 The animal began circling the base of the nest and appeared to gear up to strike again, tentatively sticking its paw out, but ultimately withdrawing it.

Later that night, the cat returned, found the nest unprotected and swiped an egg, carrying it to an unknown location in its mouth.

Days after the attack, biologists removed the female python from the nest and found all her eggs were ‘inviable or destroyed.’

Bobcats typically scavenge for a ‘variety of birds, small and mid-sized mammals, and reptiles,’ researchers noted in the Ecology and Evolution journal. Birds and nest eggs make up roughly 16 per cent of their diet in Florida. However, bobcats rarely eat reptile eggs in the state.

Burmese pythons that were captive before 1992 Hurricane Andrew were released after the destruction and have since flourished in the southern Florida ecosystem. Since the storm, the invasive giant snakes have begun to overrun the Everglades, preying on local species and dropping the population of raccoons and opossums nearly 99 per cent.

However, Burmese pythons rarely are seen defending their nests, as seen in the video.

It is estimated to be ‘tens of thousands’ of Burmese pythons in the Florida Everglades, according to USGS. 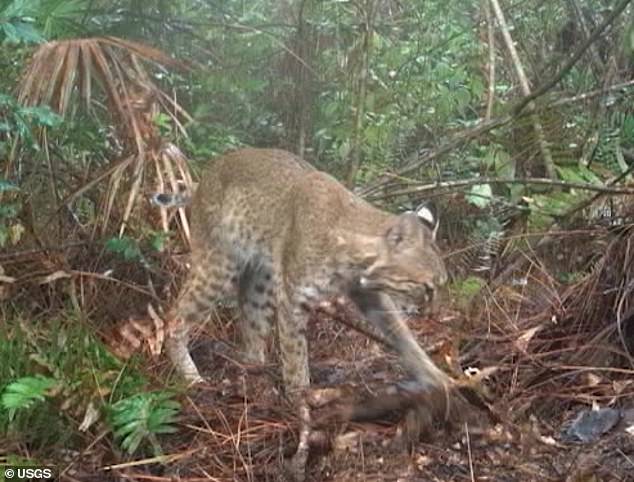 At one point, the animal began covering the nest with underbrush (pictured) before laying down on top of it 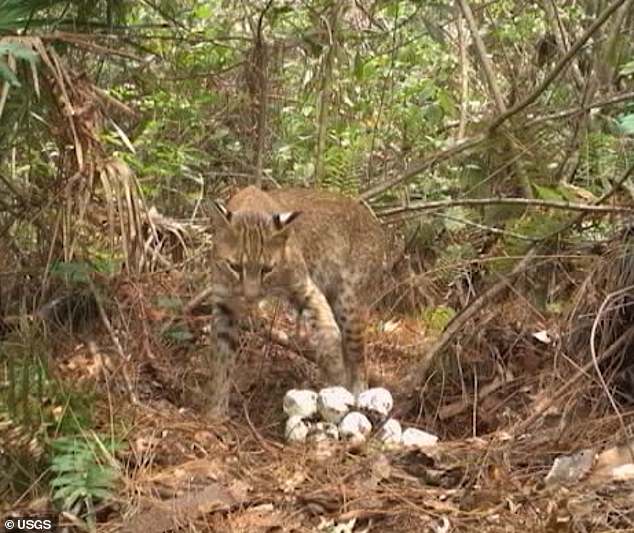 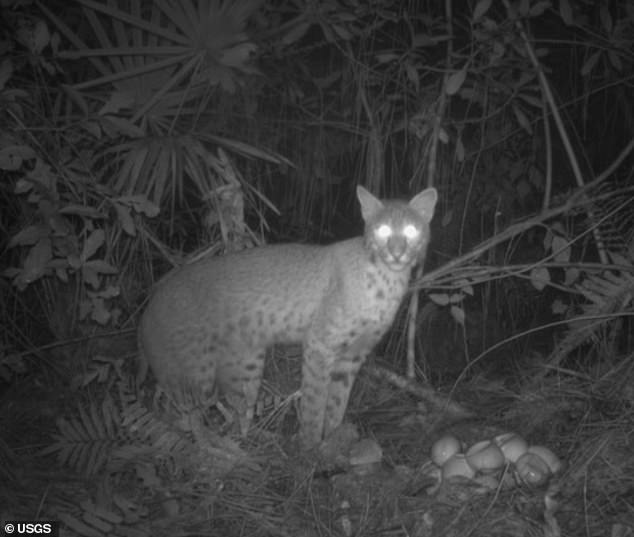 The animal made sure to pay attention to watch its surroundings as it stood next to the destroyed eggs. Researchers, who inspected the nest days after the attack, confirmed the eggs were all destroyed

The python is native to Southeast Asia and was first brought over to the US as an exotic pet, history.com said, when the exotic pet trade was booming in the 1980s. Florida, and specifically the Miami area, became the host of thousands of these animals.

However, researchers suspect this isn’t the reason the invasive species has such a high population in Florida, but rather after the hurricane when the breeding facility was destroyed and the snakes were released into swamps.

Due to the invasiveness of the species, Florida hunters are encouraged to hunt Burmese pythons and can do so without a permit on private property, according to history.com.

Southern Florida also has a Python Elimination Program where ‘removal agents’ will be paid an hourly rate of $10 to $15 an hour each day for ‘actively searching for pythons on designated lands.’ And will also receive a $50 payment for pythons measuring up to four feet and an additional $25 for every foot extra. An eight-foot python would be rewarded with $150. It also rewards an additional $200 for each verified active nest, according to the South Florida Water Management District.

Richard Madeley shared his experience with the higher...

Avon and Somerset Police confirmed they are "investigating...

European Commissioners will today, on May 18, unveil...
AMED POST

Richard Madeley shared his experience with the higher...

Avon and Somerset Police confirmed they are "investigating...