A stampeding elephant, a breathtaking volcanic eruption and hunting polar bears: Nature is shown in all its glory in prestigious German photo contest

By Adam Solomons For Mailonline

They are some of the most heartbreaking and heartwarming photos of our planet ever captured.

And despite focusing on the natural world and the animal kingdom, many can certainly be described as very human, too.

Below are the images chosen as winners in this year’s Glanzlichter Competition of Nature Photography.

Held for the past 24 years, the contest rewards just ten of the best images submitted by thousands of photographers from dozens of countries.

This year, organisers received a whopping 17,000 to choose from.

A fluffy arctic fox, a bloodthirsty lion cub who has just finished a meal and a barn swallow floating through a window frame are among the cast of characters in this year’s winning pictures.

The images will feature in a new book released on May 2 and tour Germany and Italy for the next three years. 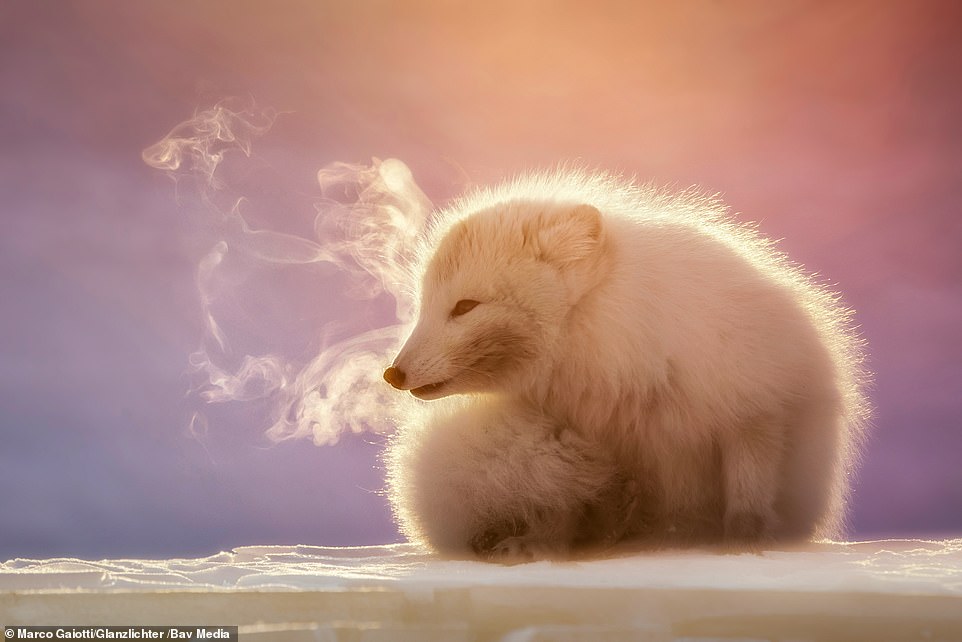 A runner-up in the World of Mammals section of the contest, this is Italian photographer Marco Gaiotti’s incredible photo of a tiny arctic fox enjoying the winter sun in Norway. Staying toasty in temperatures of -35C, the gorgeous animal is sitting tight on a sheet of snow and ice. 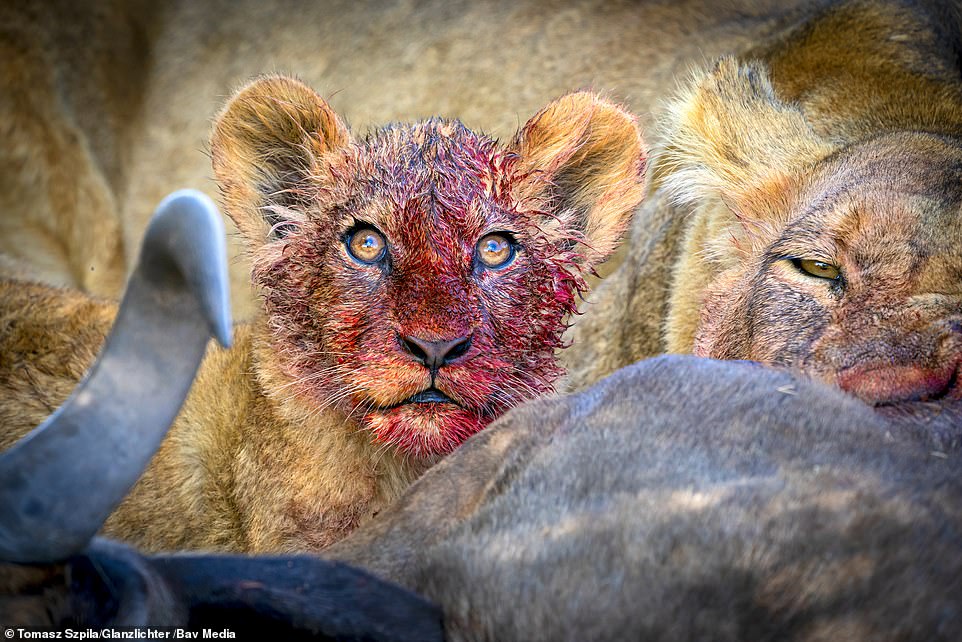 A striking reminder of the animal kingdom’s savage side, Polish photographer Tomasz Szpila caught this picture of a lion cub in the Okavango Delta, Botswana. Szpila waited patiently while a pair of female lions went off to hunt a wildebeest for the youngster to eat – and snapped the cub’s compelling expression after they finished their meal. 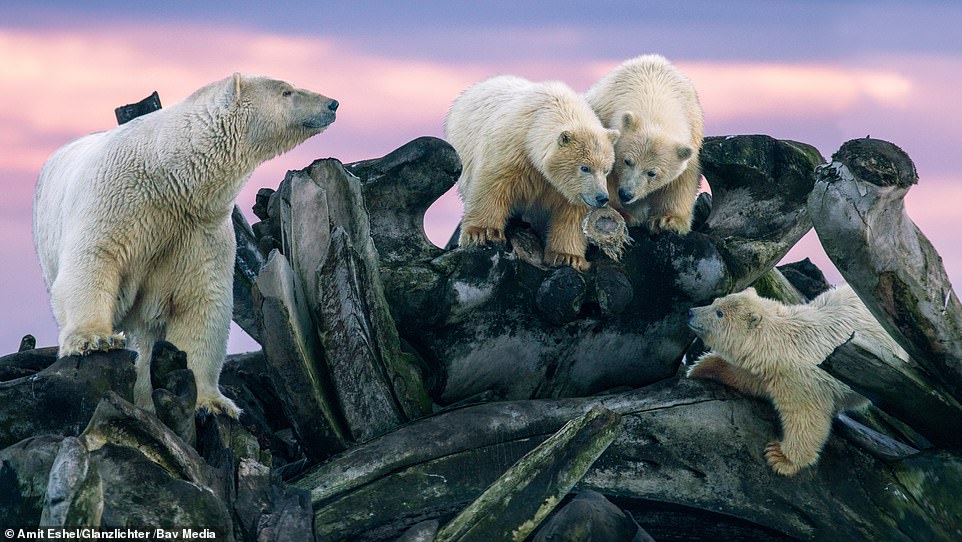 A winner in the Moments of Nature section, Israeli photographer Amit Eshel spotted this family of polar bears climbing over a tower of old bones in Alaska. Eshel took the photo near the small village of Kaktovik on one evening when the polar bear family emerged looking for food. He hoped the sight of their anxious search would highlight the effects of climate change. 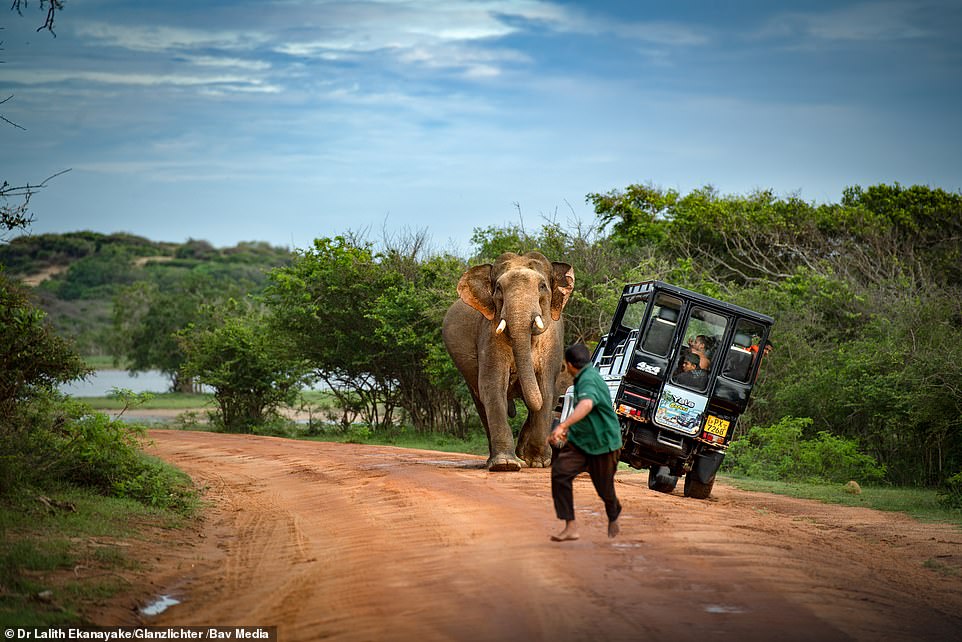 Certainly the most tense image in the competition this year, Dr Lalith Ekanayake’s picture of a stampeding elephant tipping over a truck in Sri Lanka is a frightening sight. Taken in December at Yala National Park, Ekanayake spotted the stampeding elephant charge at the truck before a brave ranger (pictured in the foreground) got in the vehicle and drove the group to safety. 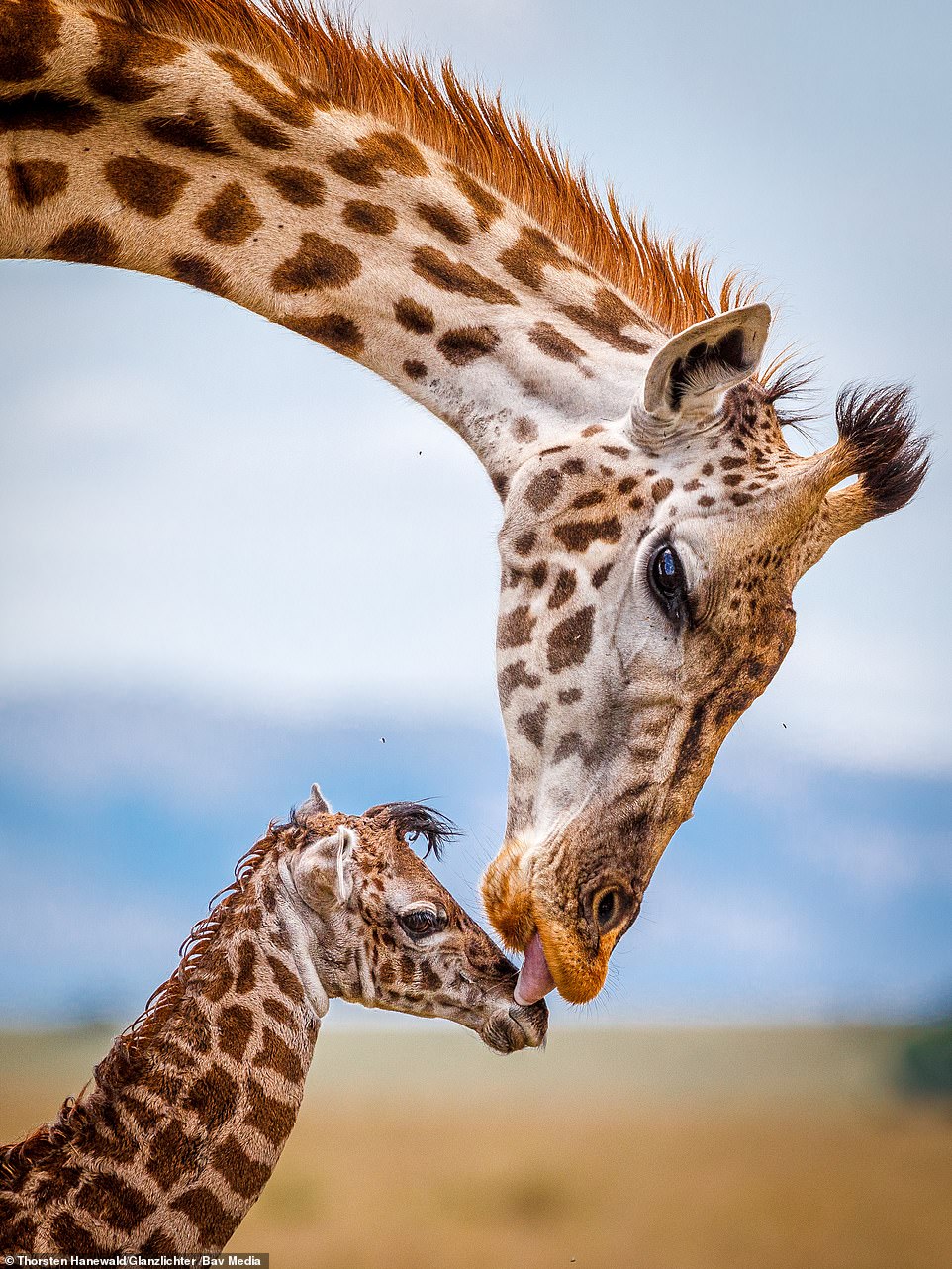 Another runner-up in the World of Mammals category, German photographer Thorsten Hanewald spotted this mother giraffe licking clean her newborn babe in Kenya. Taken just moments after the tiny giraffe took its first steps, Hanewald waited patiently for the mother’s beautiful act of care to snap the photo. He said he wanted a picture which showed the giraffes’ heads next to each other so they could share a single frame. 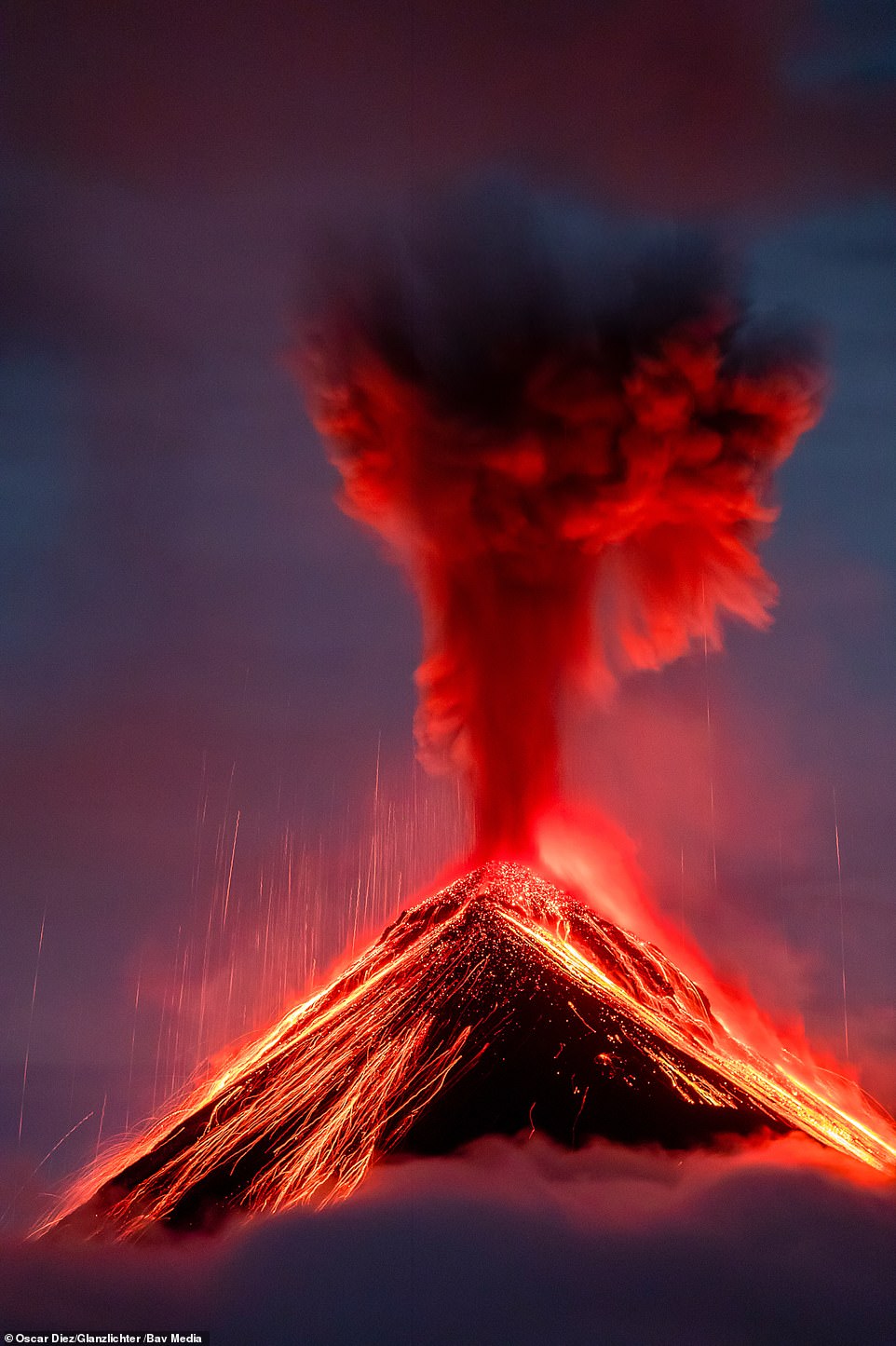 Spaniard Oscar Diez spotted this volcanic eruption in terrifying real time in April 2021. The Acatenango volcano in Guatemala, central America is one of the region’s highest peaks – and a fiery cauldron. Diez sat tight till the evening so the dark grey sky, scarlet smoke and glowing red lava would make for a stark visual contrast. It was worth the wait. 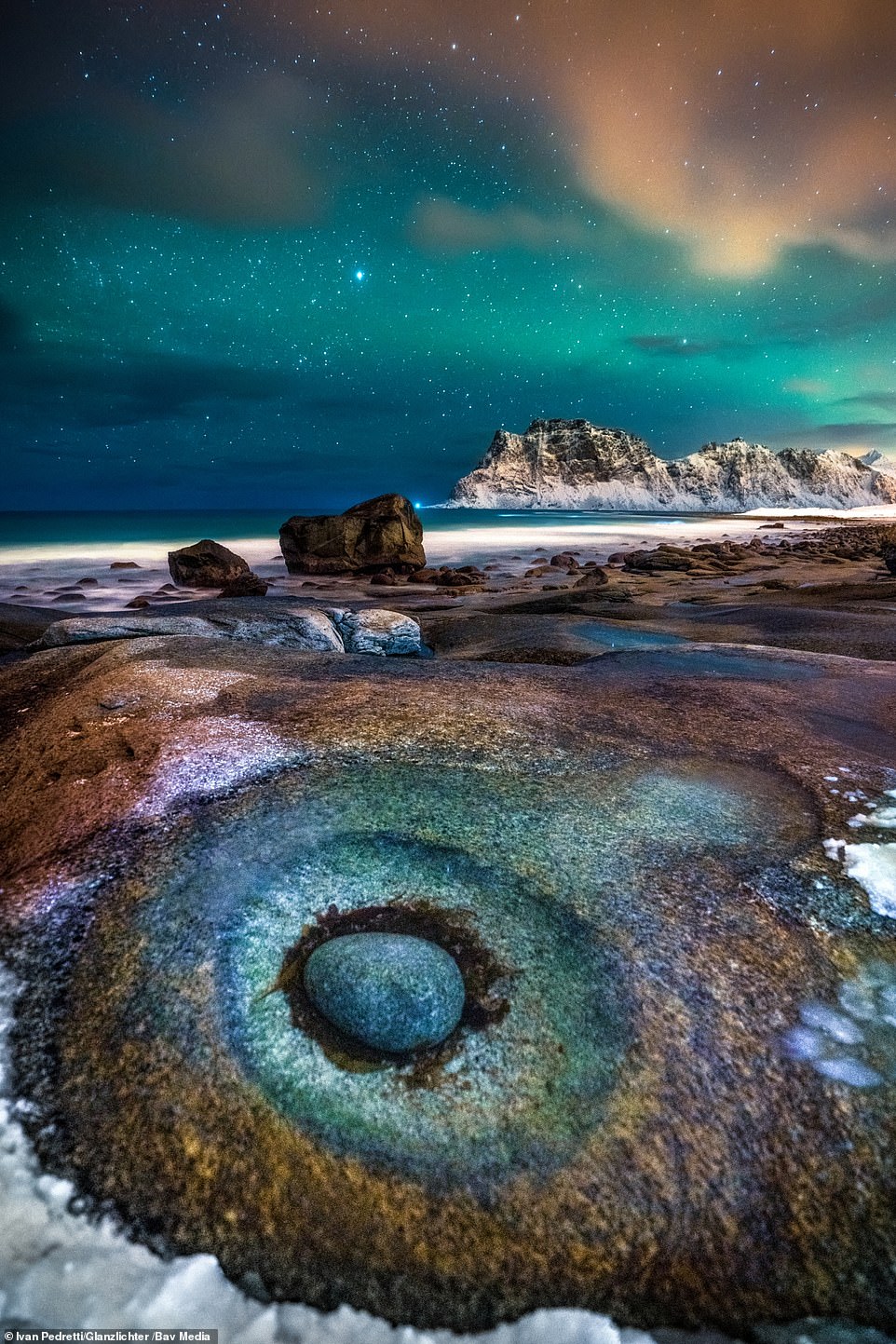 Norway is the only country to feature in multiple Glanzlichter finalists – and with landscapes like this, it’s not hard to see why. Italian photographer Ivan Pedretti captured this audacious shot of an eye-shaped rock sitting beneath the Northern Lights on the island of Lofoten in February 2020, just weeks before the Covid pandemic. Pedretti’s photo is a stunning illustration of peace, which now seems distant. That might be why it was the overall winner of this year’s Glanzlichter Competition – meaning the €2,500 is his to keep. 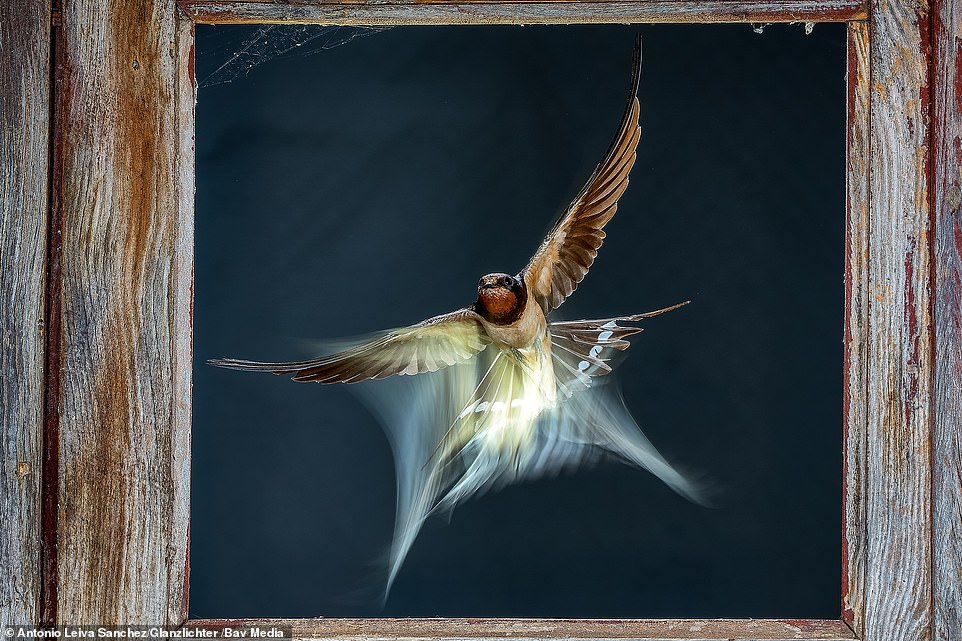 Barn swallows aren’t quite the exotic birds you might expect to feature in a nature prize-winning shot, but Spanish photographer Antonio Leiva Sanchez has found beauty in an unlikely place. The swallow snaps its wings to get through an empty window frame in Sucs, Catalonia. It seems like a tiny moment compared to the volcanic eruption and the Northern Lights, but for Sanchez’s bird, the journey is all that matters. 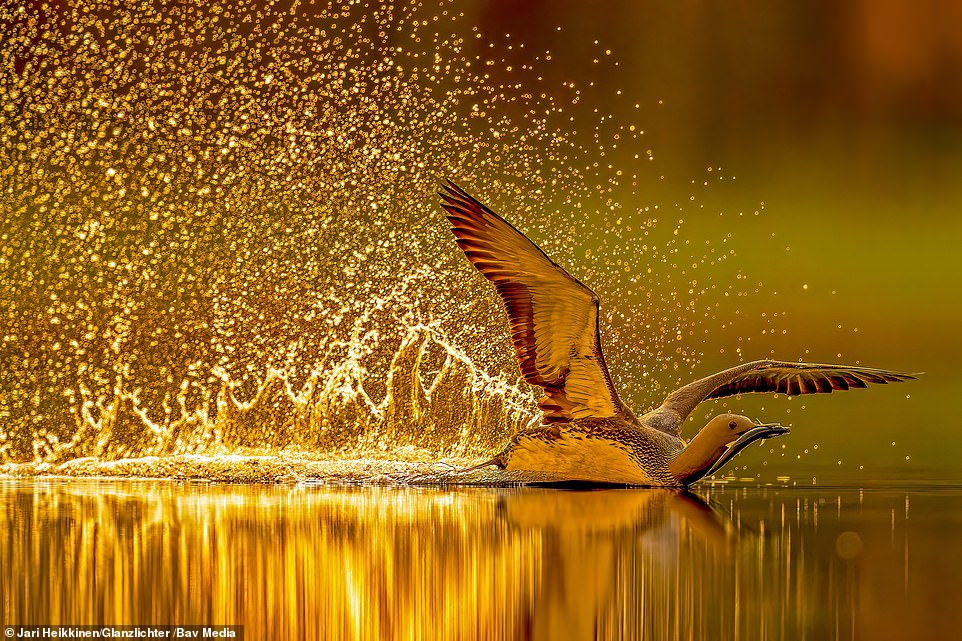 Photographer Jari Heikkinen spotted this glowing red throated diver landing on the tranquil water of a lake in his native Finland. Heikkinen was rewarded for his good timing when the shot won the Artists on Wings section at the 2022 Glanzlichter Competition. Showing the immense bird while it plucks a snack from the water, the photo represents the calmness in what might seem like a violent gesture. 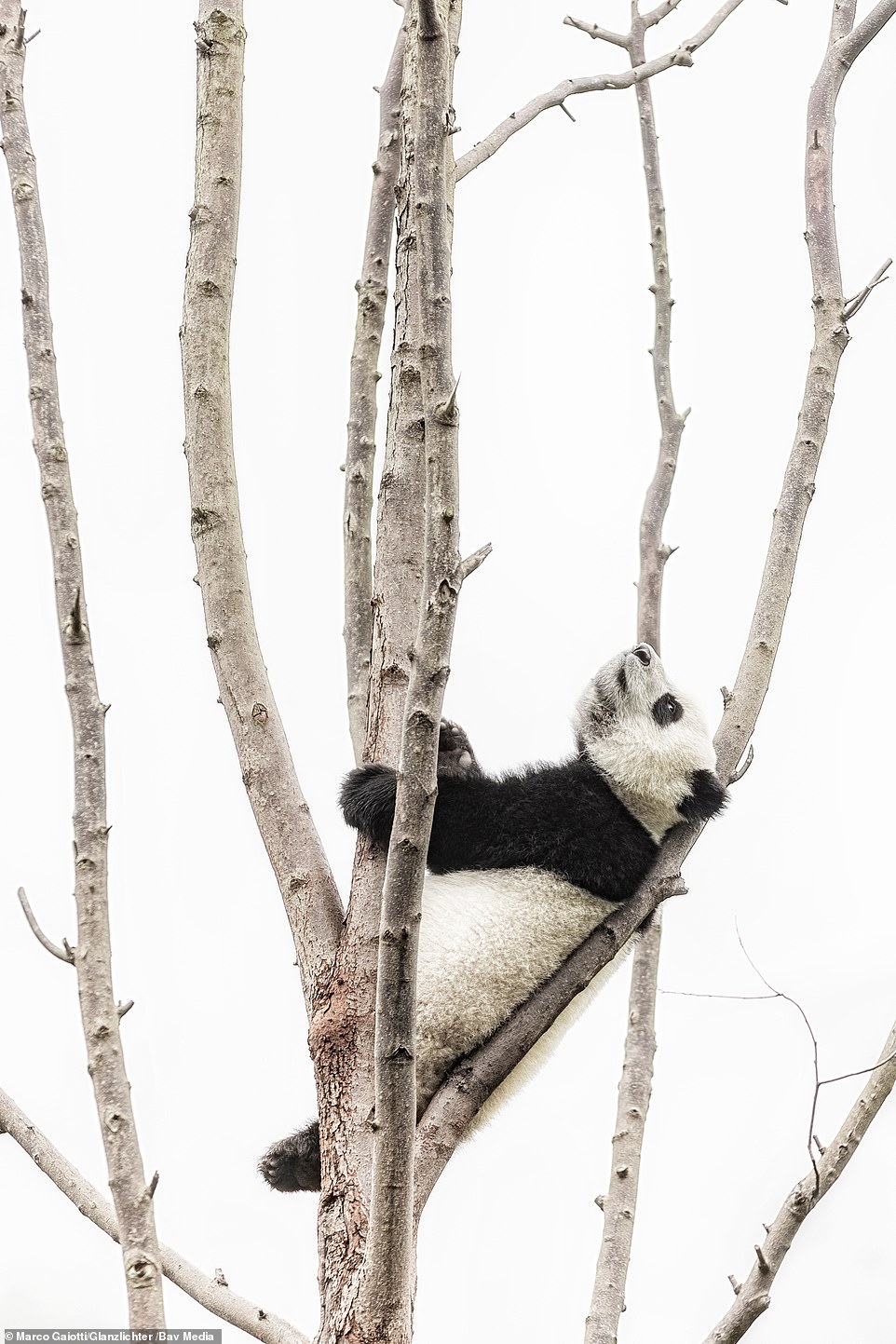 An impressive second entry by Italian photographer Marco Gaiotti, this photo of a giant panda at the Wolong Nature Reserve in China was a runner-up in Glanzlichter’s World of Mammals section. The panda is resting comfortably despite leaning on a small branch high up the tree, showing its familiarity and comfort with its environment. That’s no surprise: the Wolong Nature Reserve is home to one tenth of the world’s giant pandas.

President Joe Biden: US has enough vaccines to deal with monkeypox outbreak

Even with the war in Ukraine going much...

The PGA Championship finished in dramatic fashion on...

"Now, it’s more difficult with so many restrictions....

Even with the war in Ukraine going much...

The PGA Championship finished in dramatic fashion on...

"Now, it’s more difficult with so many restrictions....